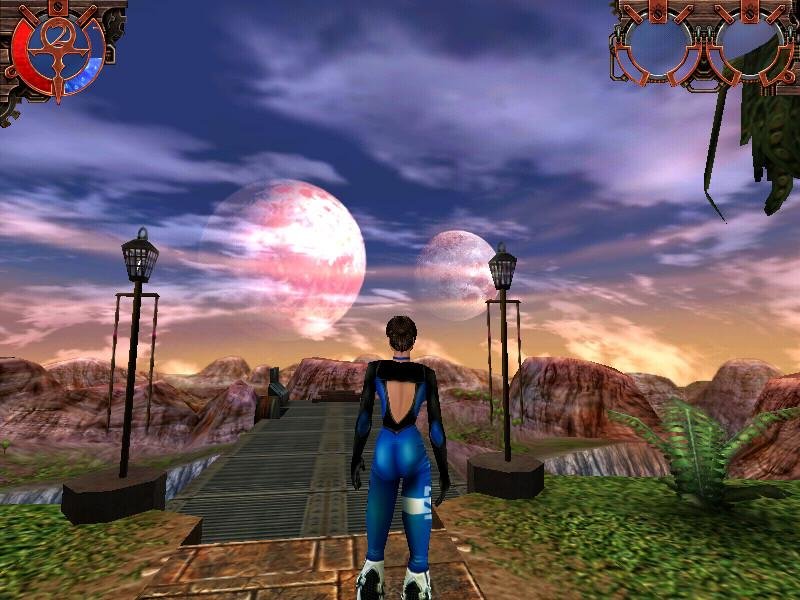 Heavy Metal is a magazine that’s been around since the late 1970s that specializes in sci-fi and fantasy stories, aimed at an older audience than typical comic books at the time. It spawned a 1981 animated film of the same – which took special care to ensure audiences that this cartoon was definitely not for kids – which was then followed up nearly two decades later with a sequel, Heavy Metal 2000. Released alongside this was Heavy Metal: F.A.K.K. 2, another sequel in video game form. It was developed by Ritual Entertainment, who previously worked on some Quake mission packs and created the 1998 FPS SiN. (“F.A.K.K. 2“, pronounced “fack” stands for “Federation-Assigned Ketogenic Killzone to the second level”, although the acronym was probably created just to be edgy. )

You play as Julie, the hero from the two films (voiced by B-movie queen Julie Strain, who also inspired the character), taking place thirty years after the end of the movies. At the start of the game, it is told that Julie killed a tyrant Lord Tyler, and brought the remaining people to the planet called Eden. This planet is unique as it has water that grants eternal life to those who drink it, and the people seem to have finally found their peace. Julie now lives a peaceful life with her pregnant sister Kerrie, helping out the citizens. All of this comes to a stop when GITH, a hyper corporation decides to invade Eden and enslave its people. Now, it’s up to Julie to save the planet of Eden and defeat the GITH forces. 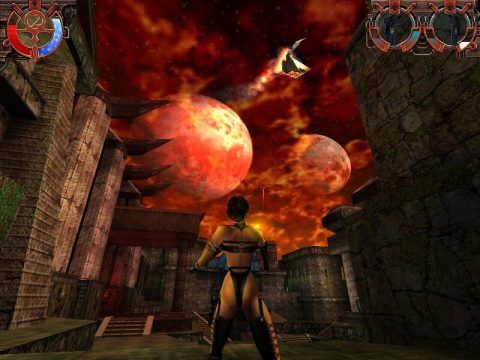 The game is a third-person shooter, with a mix of platform and puzzle elements, the closest analogue being American McGee’s Alice, also released in 2000. Like that game, it’s designed to be used with a keyboard and mouse combo, like an FPS, rather than a controller, so it feels quite a bit different from console action games. The character movement is fast and fluid, which allows for more control during combat. The camera is tuned so that Julie is always facing forward, though there’s some weird hip twisting animations if you move the viewpoint around. There are plenty of platforming elements, but due to both the digital control of the keyboard and the somewhat sluggish jumping mechanics, you’ll probably find yourself failing these segments quite often. But it’s about typical for the era and these types of games, back before developers really discovered the importance of a double jump, especially when navigating 3D terrain. It’s similar in a way to the Tomb Raider series, where Julie will grab onto ledges and swing on ropes, but thankfully quite a bit smoother than Lara’s sluggish controls. There are puzzles on several levels, but all of them boil down to pressing the correct switch, to either collect a plot-relevant item or remove an obstacle blocking your way.

The combat is the game’s biggest strength. You can equip weapons in both hands – for example, you can equip a sword in your right hand, and a pistol (or a shield) in your left hand – assigned to the two mouse buttons. This allows the player to mix weapons and find a playstyle that best suits them. The game even offers you the option of aiming at two different enemies, which can be unbelievably useful at times. There are also several variations of swords that you can pick up, all with their unique stats and effects, as well as shields to guard against weak attacks. Some weapons, however, require two hands, such as the shotgun, the rocket launcher, or the melee weapons like the chainsaw sword or the ax. The melee combat never feels quite right though, due to the animation and hit detection.

The arsenal isn’t always used to its fullest extent, as weapons such as the chainsaw sword or the flamethrower run out of ammo way too fast, and it’s best to save them for really strong enemies. The water is also an important element, as some weapons can be fully powered up if you have enough of it. Water can be picked up in the environment, or by standing in a pool of water or dropped by enemies. 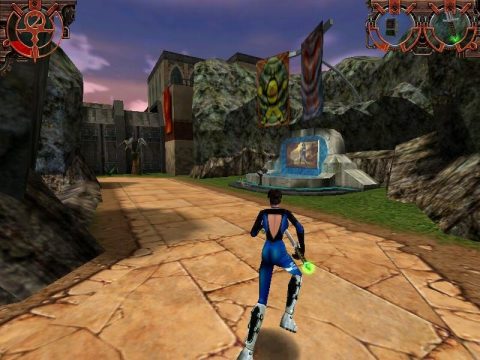 The enemies are all unique looking but can be annoying. One of the first enemies that you meet, are  huge fly monsters called Vymish that are fairly annoying, mostly since they are small and at times move way too fast. The other troublesome enemy is the Firebird, a stork-like enemy that will fly into you, knocking you down. Later in the game, they’ll literally dive bomb and explode. There are bosses that are all relatively easy, and apart from the final boss can be destroyed without much effort. They will usually be guarded by several enemies, that will harass you, but fortunately, they go down easy enough.

The big selling point is the trademark Heavy Metal aesthetics. Visually, it’s incredibly vibrant, filled with beautiful skies and colored lightning, creating an atmosphere unlike most PC action titles of the era. Outside of the village at the game’s outset, you’ll also visit jungles, a large swamp, and a series of ancient temples. The stages aren’t all that complex, but they’re creative and add a sense of depth and uniqueness. The game runs on the id Tech 3 engine, the same one used in Quake III.

Curiously, for a game titled Heavy Metal, there’s not a whole lot of rock music. There’s an original song with vocals on the title screen, but most of the music is atmospheric, only kicking in during more intense moments. And even then, there’s more electronica than actual metal.

At the center of the game is Julie, of course, and this being Heavy Metal, her figure is filled with a variety of revealing outfits, which change every level. You only really get a frontal view of Julie in cutscenes, so the developers seem to heavily emphasize her posterior, since you’ll be looking at her backside for a vast majority of the game. The developers add a bit of personality by having her comment on your actions as you move through the menu screen. 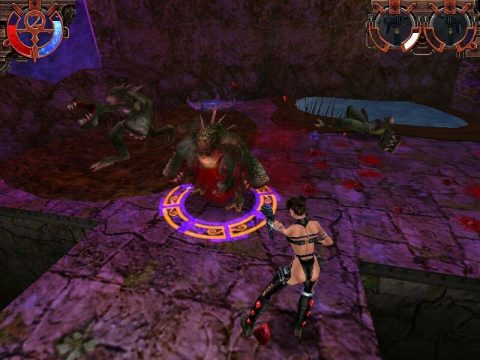 The Heavy Metal films were critical failures since they focused far more on its wild teenage boy fantasy visuals than anything else. These elements work better in a video game, since it’s concentrated almost entirely on action, rather than getting bogged down with troublesome storytelling. In that way, F.A.K.K. 2 is fairly successful – it’s shallow but stylish, even it has some of the same roughness of other similar titles from the era.

The initial release was quite prone to bugs and crashes, but patches have made it more stable, and it even runs without much tinkering on Windows 10. However, most likely due to the license, it has yet to see any digital re-releases.