Before Bioware was the juggernaut it is today, it was a small studio that found a talent for creating RPG campaigns. Their work on Neverwinter Nights and Baldur’s Gate cemented them as some of the best in the genre, making them significant names on PC – but not to the wider console market. Their stab at a shooter, MDK2, didn’t exactly set the world aflame in 2000, but they would start working on a game in that year that would finally give them that success. They agreed to work on a project for LucasArts, a game set 4000 years in the past of one of the largest and most beloved media juggernauts every made. They were going to make a Star Wars RPG, and in doing so, they changed the landscape of gaming forever. 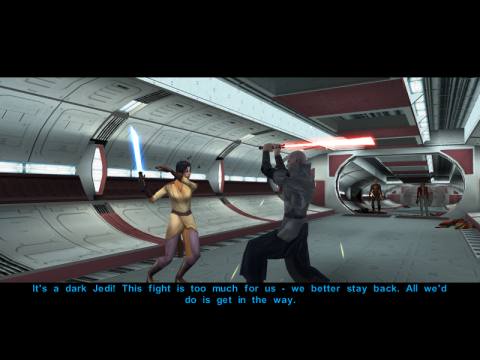 Star Wars: Knights of the Old Republic is a historical milestone in both the RPG videogame genre and in the history of the medium itself, a game that broke the floodgates open for large scale WRPGs on consoles and spurred the medium’s obsession with moral choice systems you see so commonly to this day. It tells the story of your character, whom you can name and pick the profession of, waking up on a Republic warship under attack by a sith armada. The ship is destroyed and you and a decorated soldier manage to escape to the nearby planet of Taris, now with the task of finding a jedi key to victory in the war named Bastila. However, things only become more complicated once you get off world, as you start following the footsteps of a dead sith lord named Revan to find a collection of star maps that will lead to some mysterious power the sith have been using to turn the war’s tide in their favor, even getting jedi training for the mission. Your party includes…

Carth – One of the Republic’s best soldiers and an expert with blasters. He’s paranoid from a betrayal he suffered earlier in his career, acting as the team’s logical voice of dissent. The main love interest for a female PC.

Bastila – A jedi with the power of battle meditation and the Republic’s secret weapon. She’s imprisoned on Taris after the crash and joins the party after rescue (or rather after she rescues herself). Tries to be the voice of reason, but she’s haunted by a lot of baggage and self doubt. Main love interest for male PC.

Mission – A thief twi’lek from Taris who joins the group to find Bastila. She’s only fourteen, but knows how to handle herself and has a lot of skills to help you out of a tough spot.

T3-M4 – An R2-D2 like droid purchased from Taris. Despite its small size, it packs quite the punch in combat and knows its way around machines.

Canderous – One of the two dark aligned party members. A former Mandalorian soldier and veteran of the Mandalorian War, the war that caused Revan to turn to the dark side. He’s good at melee and distance combat, joining when he decides to ditch his obnoxious crime lord employer.

Juhani – A confused jedi who thought they killed their master and is starting to give into the dark side. If you manage to convince her to turn back, she joins your party and brings offense force moves. She’s also the first gay character in Star Wars, though executive meddling cut out a lot of her romance route with a female PC.

HK-47 – A strange protocol droid being sold by a low end junk dealer that has a talent for sarcasm and violence. In reality, he’s an assassin droid of unknown origin and easily the most evil member of the team. Ironically, only light side players have to recruit him.

Jolee – A former jedi living in the woods on Kashyyk and the most neutral member of the party, letting him use any force power with no penalty. He acts as a mentor, questioning most every decision to get you to think about said decisions, but it’s not clear what his agenda or goal in joining is. 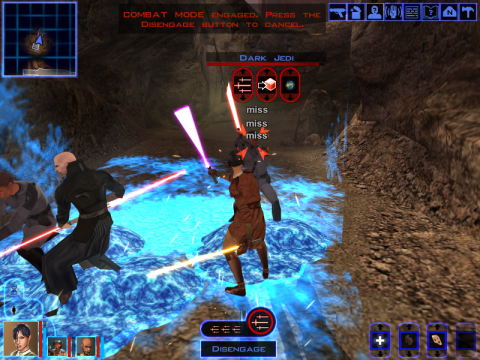 KOTOR‘s story has all of the usual Bioware strengths and weaknesses. The characters are fairly likable, despite how poor many of their introductions are, but the main story created for them is fairly weak. KOTOR, despite being set so far in the past and offering more fantasy-like elements instead of the usual sci-fi focus, has the exact same sort of conflict as the original trilogy. The aforementioned artifact of doom being used has the Sith effectively putting the Republic in similar shoes as the rebels, despite the Sith being an invading force and not a ruling one. They even have the exact same command set up as the Empire from the original trilogy, and you’re first introduced to their foot soldiers during a fascist occupation. Malak, the main antagonist, comes off as an angrier Darth Vader, and far less threatening. He’s like a rejected Mad Max villain, complete with a goofy fake jaw and weird blue paint put over his bald dome. The Sith are generic “MUHAHA, YES, I, AM EVIL, MAHAHA” style bad guys, a mixture of kneeling fascist bullies and idiot force users who fail to see the woefully large cracks in their own ideology, and the story doesn’t put enough attention on this fact to make it work in a critical sense outside the Korriban trip. 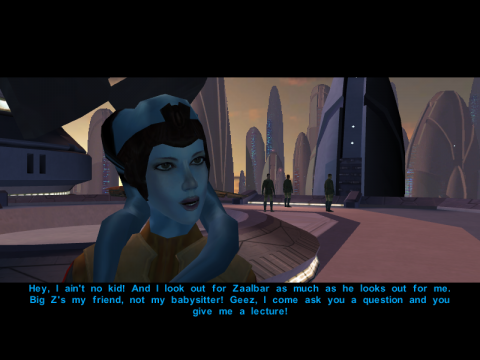 When the story isn’t dull and predictable, it’s morally confused. There’s a real dissonance when the game lets you mow down Sith like Summer lawn grass, yet a light side playthrough on Kashyyk depends entirely on NOT killing slavers until the rebellion at the end. The game raises a lot of heavy subject matter, but it doesn’t know how to tackle and discuss any of it, refusing to find necessary gray areas so the light and dark choice mechanic remains central. There are two members of your party who are former slaves, and there is never a light side option to give them justice for what was done to them or help them cope with said pasts in a healthy manner beyond repression. That is absurd.

On the light side (*ba dum tis*) is the character writing. Bioware has always had a knack at making likable characters, even within archetypes, and this game is no exception. Carth seems like a boring dude, but once his paranoid side starts coming up, he becomes one of the most relatable members of the cast. Mission and Canderous are just fun to have around for different reasons, Juhani has a strong arc, and Jolee is genuinely one of the best party members the team has ever made (and that is not said lightly). Bastlia, T3 and Zaalbar are the weak links, but even they get some moments of note. Of course, the stand out remains HK-47, though it’s not until the second game that he really comes into his own. It’s just refreshing to have someone so openly evil around, making him a much needed source of dark comedy for light players. 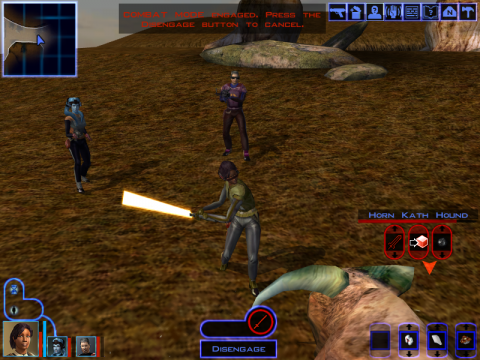 The game itself, though, feels like a slapdash mess to anyone used to more elegant systems of today. Part of the issue is that the game faithfully adapts a Star Wars tabletop game, so the even annoying dice roll hit system is in play and absolutely miserable to deal with early on. This makes blasters horrid to use, due in part to their high miss rate, but also due to their slow fire rate with the turn based battle system. While everything moves around in real time, actions are done in turns, which breaks the flow of most fights. The game eventually becomes playable and enjoyable after a rough few starting hours, but then there’s the bigger issue that most every skill in the game is worthless.

Skills are additional abilities your character can use outside of battle, creating new options within a level. KOTOR offers computer use, demolitions, stealth, awareness, persuade, repair, security (aka lockpicking), and treat injury. Of all of these skills, security is literally useless because every locked door and container you can use it for can easily be slash and blasted open, stealth only has one single area in the game where it has any use, and using repair to weaponize defunct droids to your use is barely worth the effort outside some extra XP. You are literally wasting skill points if you put them into any of these areas. Party members also have skills, and they just make any skill focused build pointless by their wide variety of shared abilities. Only Persuade is at all necessary, and even that has its own ridiculous issue. You know how games like Fallout: New Vegas and Harebrained Scheme’s Shadowrun games have hard number checks for persuasion? KOTOR has invisible dice rolls. You can have all the persuasion you need and still fail the invisible dice roll, which has massive impact on the course of the story in each world you visit. 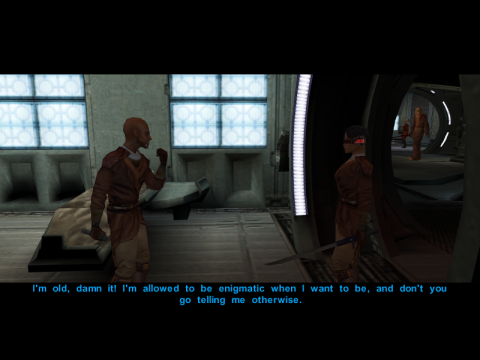 Quests are mostly a mixed bag, ranging from kind of inventive (including a criminal investigation and a surprisingly fun racing game) to oddly empty. The main four world quests to go through in the story are mostly poor. Kashyyk is just unsatisfying in its conclusion, no matter what side of the force you side with. Tantooine’s feels underdeveloped, though partly because of the lack of sights to see. Manaan has some good side quests, but the story quest comes down to some forgettable base crawls. Korriban is the only one that stands out, with some fun bits at a sith academy and the only point of the game where it properly criticizes some of the politics on display by deconstructing the sith code. The most disappointing aspect of all of them, though, is that most everything comes down to the limiting light and dark morality system. You’re either a cartoonish serial killer or a goodie two-shoes with weird moral lapses (see not killing slavers). There’s no real middle ground, and the game seems to actively want you to pick one extreme or another. Unfortunately, this is a problem we still have with moral choice systems to this day, kind of defeating the role playing aspect of the role playing game by pigeon-holding things into two bizarre, inhuman extremes.

This shows worst during the game’s big twist, possibly the most famous aspect of the game. Your reactions to it are either justified rage or sudden, out of character acceptance that becomes both unsatisfying and somewhat horrifying due to how the game got to that point in the first place. It’s a perfect summation of Bioware. They can write a character and engage in the moment while tossing as much world building as possible, but theme and messaging don’t seem to be considered at all. At worst, a massive dissonance is created, dragging the player right out of the narrative. 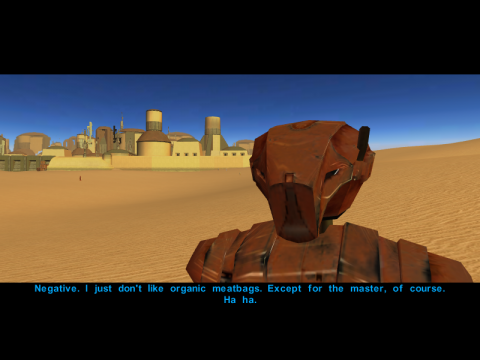 There’s still a great deal to like, such as the inspired prison dimension event or the great character quests, but KOTOR as a whole is a messy accomplishment. It’s impressive for what it did in its time, but playing it today reveals an incredibly clumsy core. However, the same can’t be said for the sequel, which benefited from a very, VERY different studio behind it…