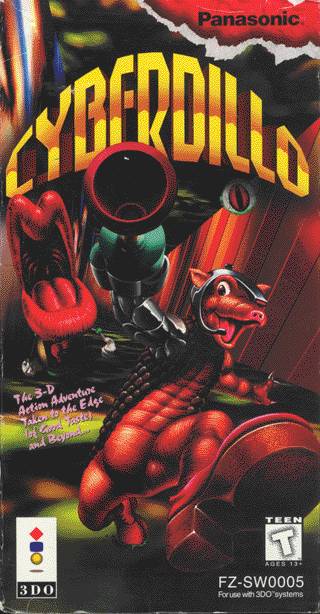 A lot of times when people encounter a game that doesn’t make much sense, they’ll usually write it off as the product of some kind of mind-altering substance. More often than not, that’s probably not true. Cyberdillo, however, is a game where one hopes that copious amounts of drugs were involved in its creation, or else the only other thing we can blame this on is pure, simple madness. Cyberdillo is a game where absolutely nothing has any particular reason or purpose for existing. It is at once a shining beacon for the 3DO, the system it came out on, for being the only console you’d probably see something like it, and a damning blemish for the exact same reason. 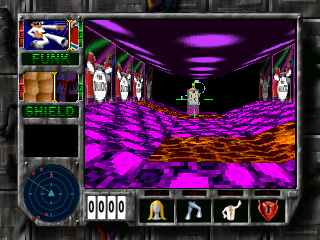 From a gameplay perspective, at least, the game sounds pretty normal. It’s a substandard FPS where you control the Cyberdillo, who got run over by a car, and then was made into a cyborg. That’s the entire plot, by the way. Every level basically involves wandering through a maze of corridors and rooms to find a certain item you’ll need to go to the next level. Your main weapon is a plunger shooter, which have unlimited ammo. The problem is that it takes somewhere between five or ten hits to kill a single enemy, which can get really annoying when you’re facing a whole room of them. Each world also has a unique special weapon, which works exactly like the plunger, only it does more damage. 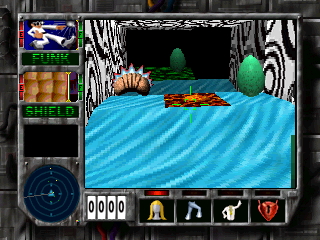 Unfortunately, it’s not a very good FPS. From the start, the controls are too slippery, so you’ll always be lurching into enemies. Either that or one of the giant spiked balls you’ll find everywhere, which drain your health away so quickly that you’ll be seeing the rather dark game over screen in seconds. The resolution’s generally so small that it’s hard to see anything unless you’re right up in front of it, and everything is generally so chunky and pixelated that it feels like you’re playing the old Windows maze screensaver. Every level is generally the same, and the game reuses more or less the same three enemies for the entire game. 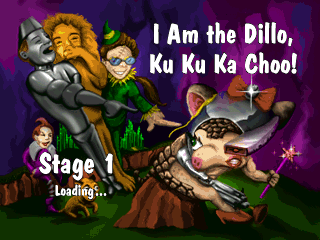 If it stopped there, it’d just be a pretty mediocre FPS. But Cyberdillo doesn’t stop there, oh no. At first glance, you might think the game is trying to be “zany” and “wacky”. The problem is, however, that everything in the game feels like some kind of fever dream. Enemies range from things like cans of hairspray to bipedal, somewhat phallic hot dogs. Power-ups, on the other hand, include the bone flute, which temporarily darkens the screen, (Yes, it makes you blind. This might just be the first masturbation reference in a commercially released video game.) to the laxative, which will kill you in 20 seconds if you don’t find a toilet first. 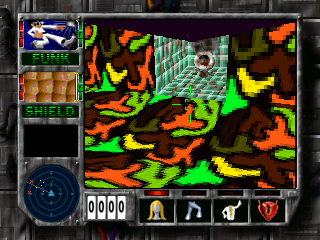 The levels themselves, while their geography is pretty samey, are designed in a way that leaves you asking just as many questions. The levels have barely coherent themes, like “disco”, or “Wizard of Oz/kitchen/something to do with fiber”. Floor, ceiling, and wall textures are usually just a confusing, and include things like pictures of teeth, lizards, and what can only be assumed are photographs of the developers. The weirdest touch of all would have to be that every world has its own health bar. In one of these, the health bar is simply labelled “Pencil”. When it’s full, the bar depicts a guy bloodily jabbing a pencil into his own eye. As the bar empties, the bar reveals the guy not putting a pencil in his eye. Wouldn’t it have made more sense the other way around? Er, no, probably not. 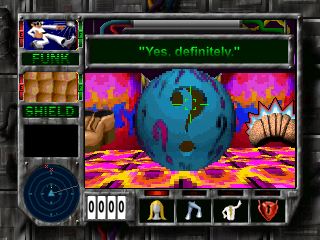 Something else to note is that the game’s “making of” video can be found on YouTube. It reveals absolutely nothing about how the game was made. It also includes a clip of a man, presumably one of the developers, sniffing a dog’s ass while a narrator explains that Cyberdillo levels were designed based upon common, everyday experiences. Thank you, Pixel Technologies, for never making another game again. 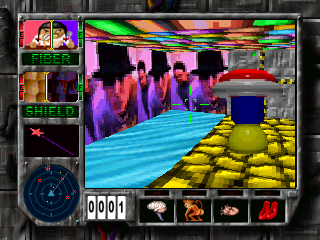 Oh, and there’s also a PC port, which is apparently very similar, except for bigger draw distances.