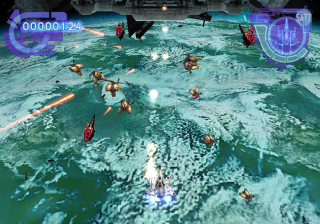 It took seven years from the release of the first Silpheed to the release of the second, on Sega CD. And it took another seven years from that for the release of the PS2 sequel, the third in the series. Wikipedia again peddles its own brand of stupidity by saying this is a remake of the earlier games, when it is quite blatantly and obviously a full blown sequel – in absolute certainty this should be acknowledged. Featuring the involvement of series creator Takeshi Miyaji, co-developed by shoot-em-up veterans Treasure, and published by Working Designs in the US, it had the potential to be one of the greatest shoot-em-ups of all time.

Unfortunately one word sums it up: mediocre.

It’s not that The Lost Planet is a bad game, it’s just painfully average given the pedigree of everyone involved. Treasure had already proven themselves with Radiant Silvergun, a vertical shoot-em-upfor arcades and Sega’s Saturn, which to this day commands high prices and an inflated sense of worth from gaming’s cognoscenti. It took the genre in bold new directions, with seven weapons accessible from the start and a scoring system which encouraged you to let some enemies live. It was also brutally difficult, some say impossible, if you didn’t play it the right way; the home console port allowed you to improve weapon strength through regular use, RPG-style, for easier play. In fact, Radiant Silvergun was so different, so wildly unconventional compared to genre stalwarts, that some players dislike it tremendously. Regardless of whether you love it or hate it though, Radiant Silvergun was a vertical shoot-em-up unlike any other at the time, and which to this day hasn’t been replicated. 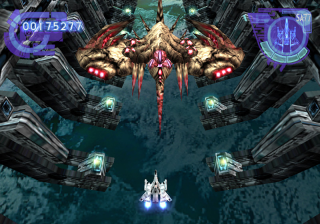 The Lost Planet in contrast goes to the opposite end of this spectrum, featuring almost nothing to make it stand out. One of the sad problems is that the first two games in the series rode the crest of technology and what was possible, showcasing 3D and polygons when they were new, or otherwise rare on home consoles. They stood out visually and were legitimately novel and exciting – maybe you could even say they were edgy. Since the Sega CD release, there had been the PlayStation, which popularized 3D, while its successor, the PS2, had made it utterly de rigueur. If you weren’t pushing polygons in 2000 then your game was either ignored as a retro throwback or considered bizarre and quirky (Fantavision, anyone?). Unfortunately The Lost Planet isn’t even a pretty looking polygonal game anymore, with drab repeating scenery, structurally basic 3D models, coupled with uninteresting effects. It has no chance to compete visually now, and the sad irony is that the flat-shaded polygons of the Sega CD release actually hold up better today, exuding more charm than the generic textures of the PS2 release, which shouldn’t matter if it’s functionally interesting. However, the gameplay hasn’t evolved at all since the previous release. In fact, it’s gone backwards!

The original Silpheed had five weapons to be mixed and matched on each wing – a total of 25 combinations. While the second game decreased this to four main weapons for mixing, it added four option weapons which greatly added to the strategy and allowed 64 combinations. The Lost Planet ups the weapon selection to nine separate weapons for mixing, but removes the options. This equals 81 combinations, which may sound mathematically superior, but keep in mind you now only have access to any two weapons at a given time, just like in the first game. In the Sega CD release you had the weapons on each wing, in addition to your option weapon at any time. The extra combinations available in the PS2 version are purely notional, only accessed during the intermission between stages. In an actual boss fight you want as much choice as possible, immediately. None of which actually matters, because once you acquire the optics laser you might as well stick with that on both wings for the entire game – the napalm bomb is also good, but usually you want range more than power. Only with the final boss is it worth switching to the thunder arrow weapon. So those 81 combinations are all redundant, compared to the Sega CD release where there was a good reason to vary the weapon selection.

The sole idea which is even remotely interesting, though it’s never really made use of, is The Lost Planet‘s proximity scoring. Kill an enemy and the closer you are to it the higher your score multiplier is for the kill. And that’s about it. The numbers are slightly bigger, but it doesn’t affect the gameplay, and it won’t really affect anyone’s play style. Although weapon upgrades are rewarded by high scoring, once you’ve acquired the optics lasers there’s little point in trying anymore – not that it’s difficult in the first place. The whole thing seems to have been bolted on as afterthought: oh, hey, let’s encourage players to get close to enemies by raising their score! Clever in theory, but poorly executed, and other games at the time did the same thing anyway. 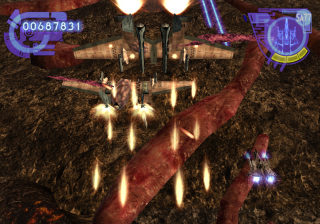 The earliest example of this idea, if not the first, is UPL’s Omega Fighter, a vertical shoot-em-up for arcades, from 1989. It featured several unique gameplay ideas, including score bonuses for killing enemies at close proximity. There weren’t any home ports but, given the historical precedent it appears to set, it deserves in-depth coverage at some point. Another game to use a similar system was Psyvariar, which predates The Lost Planet, where getting close to enemy fire creates “buzz”. Once sufficient buzz is collected, the player becomes temporarily invincible and can ram enemies, or buzz more bullets to repeat the cycle. The entire system is ingeniously integrated to help with passing difficult bullet patterns or taking down especially tough enemies – it forms a cohesive part of the game’s design and fundamentally changes how you approach every enemy and projectile. Another game with a comparable system is Shikigami no Shiro, released slightly after The Lost Planet, and its Tension Bonus System. With this, the score multiplier for a destroyed enemy is dependent on how close to an enemy bullet the player is, and also results in score items being automatically collected; in Silpheed the score arbitrarily goes up, without the visual reward of hundreds of score items homing in on you. More significantly in Shikigami, when close to enemy fire, your own attacks increase in power. It creates an excellent risk/reward dynamic as you venture as close to danger as possible for increased score and firepower; boss battles develop an elasticity as their increasing attacks augment your own. Both of these games saw release on PS2, in addition to multiple sequels, and all of them make better use of the concept than Treasure was able to. They’re also all better alternatives, generally speaking, if you want to play a vertical shoot-em-up.

What makes Treasure’s lack of effort on this especially shameful, is that for the later developed Gradius V for Konami, a company from which they originally splintered, they pulled out all the stops to create probably the best hori-shoot-em-up on the system. The irony is, some of the puzzle-like sections in Gradius V seem to resemble a couple of the more interesting bits from The Lost Planet, which were never exploited to their full potential. One memorable section in The Lost Planet is when descending a shaft and security systems come alive with criss-crossing fire and interwoven laser beams. Several parts of this level are directly comparable to areas in Gradius V, except here they’re conveyed in a tired fashion, slowly and without any panache. Furthermore, a mere year after the Japanese release, Treasure would bring out Ikaruga in arcades, another vertical shoot-em-up and one which commands as much reverence as Radiant Silvergun. It’s impossible to fathom how in the intervening years between Radiant Silvergun and Ikaruga, Treasure could produce a vertical shoot-em-up of such abject banality. Again, it must be said, The Lost Planet is in no way a bad game – it is enjoyable to a degree, but it just feels like a wasted opportunity.

A lot of criticism is raised on this page because of the PS2 version’s lack of innovation (in fact, complete lack of any effort whatsoever), whereas the Sega CD release is praised despite its mechanical conventionality, which may seem like a contradiction, but it must be emphasized that even when compared purely to each other, the Sega CD installment is the superior game, with faster pacing, more excitement, and more strategy when it comes to weapon usage. The action has gravitas, whereas on PS2 it’s tepid and uninteresting. The Sega CD version is just more fun to play all around. 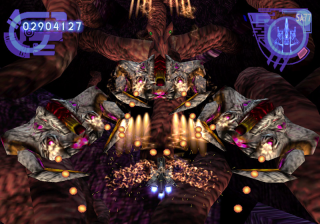 At least Working Designs did a decent job on the localization, removing slowdown that was present in the Japanese release (and which magazines like EGM complained about during early previews), in addition to adding analog stick support for ship movement. This really makes a difference, since the PS2 D-pad is awful for extended play. As Vic Ireland said in the manual: “When we converted the game for release in the US market, we changed very little. The two major changes were removal of slowdown present in the Japanese release, and the addition of analog control. Analog control was important to retain the ‘arcade’ feel of the shooter, rather than forcing gamers to bust their thumbs on the directional buttons.”

Working Designs even released it with a fancy, shimmering cover. Unfortunately, none of this raises what’s an otherwise wholly unremarkable game. It’s also disappointing that they didn’t try jazzing up the storyline, which features inordinately long sections of deadpan explanatory dialogue and scrolling text, delivered by an actor who is clearly bored out his mind. The dialogue consists mostly of obtuse place and ship names, and how something… something… Who really cares? The events describe an invasion by an alien life-form and subsequent destruction of planets (the presentation of which seems to borrow from R-Type), which supposedly takes place 31 years after the Sega CD version. As a nice nod towards the second release, you again have co-pilots chattering in the background, occasionally voicing lines similar to those heard previously.

As stated in the manual: “More than five centuries have passed since mankind first ventured into space. Although there has been suffering from occasional civil wars and unrest, mankind now prizes its peace and prosperity. The planet Solont, located near the center of the galaxy, is the 11th world to be colonized by man, and it is about to be visited by a new and unknown life form. 31 years after the Zakarite Civil War, mankind is about to confront a new threat – a threat from the darkest corner of the universe. The future of the human race now rests in the weary hands of the Silpheed Squadron. Every pilot in the group of space aces flies the Silpheed Type J, which boasts a defensive shield and two huge weapon racks for an incomparable combination of flexibility and power.” 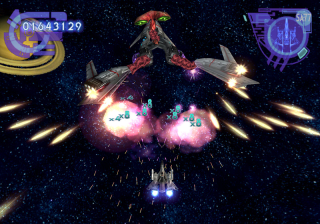 The press at the time, according to GameFAQs since MetaCritic and GameRankings have limited entries, gave it a mix of review scores, ranging from terrible to quite good. Given that during the early days of the PS2 there weren’t many vertical shoot-em-ups available, and the fact that the best never left Japan, there may have initially been a reason to play The Lost Planet. Now, however, with the PS2 lifespan over and its back-catalog well documented and easily accessible, there are genuinely dozens of other much, much better shooters, especially if you can play Japanese imports. Even its predecessor on Sega CD is a better alternative, given its (now) retro charm, still lively soundtrack and more versatile weapons system.

Special thanks to BulletMagnet for information on Omega Fighter, and Silpheed.org for emulated PS2 screens.