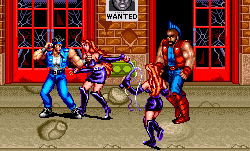 The ever-prolific Taito published games in just about every genre you can think of, including driving, puzzle, action-platformers, lightgun shooters, and the very arcade-centric genre of beat-em-ups. For awhile, everyone loved to take two to four characters and recreate martial arts movies by thrashing an astronomically high amount of goons and their skilled bosses. Even one-on-one fighters like Street Fighter II became more popular, there was still a fraction of devotees to the likes of Capcom’s technically polished brawlers or Konami’s four (in one case, six) player parties. Taito may not have been as prominent as those two companies, but they made a respectable quantum of beat-em-ups that were weird (Growl), super-weird (Ninja Kids) or giga-weird (Pu-Li-Ru-La), but they were all weird in that really fun Taito way and all are worth playing. Compared to most of the rest of their catalog, the incredibly obscure Silent Dragon isn’t quite as charming or noteworthy as the rest of their stock, but it’s just odd enough that it deserves some recognition. 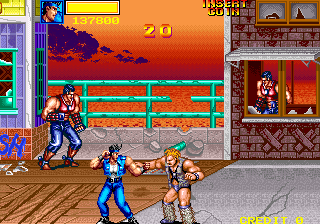 Something about Silent Dragon‘s sprite or sound design feels a bit off, and the game was only published by Taito with the mysterious East Technology handling the actual legwork. That name probably doesn’t sound familiar, but it turns out the only other known game East developed was… the rather sub par Double Dragon 3. The good news is that Silent Dragon is a considerable step up from Double Dragon 3 (no stupid microtransactions, for one), but it still misses the mark of being a must-play.

There are four characters: The balanced Joe, the supposedly fast Lee (who is Jackie Chan), the unsubtle muscle ninja Katou, and the equally bulky G.I., Sonny. Everyone has the standard multi-hit combo, jump attack, and special invincible attack that sheds off a bit of life, as well as a sliding kick and a multi-knee-to-the-face grab assault. Somehow, Lee’s ending attack is a bit slow and somehow allows punks to knock him down before the full animation is delivered. Also, Sonny seems to be almost a headswap of Katou but with slightly slower attacks, thus there not being much reason to pick him over Katou, so we only have two effective fighters among the roster. 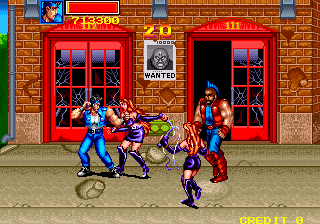 The plot involves a standard kidnapping, the least original justification for street-based carnage since 1987. The girl in question, Catherine, just so happens to be Joe’s girlfriend and Sonny’s sister, but she is now held captive by the nefarious Dr. Bio. The doc’s unique appearance can best be described as pirate Joker as played by Bea Arthur, so that’s a point in this game’s favor at the beginning. Your inevitable revenge rampage takes place over five levels, the first two of which are on your pretty standard city streets. First area’s a harbor, but it’s pretty straightforward from there to the third level, a big moving truck even shorter than the first two stages. Things get interesting at the fourth level, a jungle and a volcano with some freaky beasties, and the finale is a laboratory fortress where most of your continues will be spent. Aid comes in the form of street food that’s far cleaner than it should be and the East logo, which gives you enhanced power for several seconds. You can also grab a sword and what seems like a car battery. The latter’s pretty awkward as a weapon, but points for originality instead of the hoary old lead pipe. You can even find explosive barrels and randomly strewn dynamite connected to detonators to blow up enemies, though why anyone would leave that out in the open is up for pondering.

The enemies mostly consist of your basic dime-store punks and aren’t much to write home about, though you do sometimes face sumo wrestler mid-bosses with Mad Max-style shoulder armor. The bosses are considerably more interesting and are certainly the least bland aspect of the whole package. The first one is bequeathed the fantastic name of “Animal Cupid” and looks like wrestler Dusty Rhodes with bandages covering several parts of his body (which does not include the buttocks, unfortunately). He’s a pretty standard fighter, but he morphs into a horrifying Man-Bat™ and flies off after losing. Second boss is an unknown-named hair metal reject with insane kicking ability, also looking akin to a product of Mad Max. 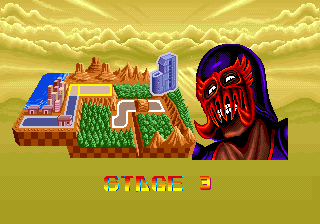 The third boss, Wolfkid, is a headswap of the second with more powerful attacks, but the head he’s been swapped for is a blatant ripoff of Jagi, the helmet-clad maniac brother of Kenshiro from Fist of the North Star. This leaps over the line of allusion straight into plagiarism, but Silent Dragon stayed… well, silent enough in public attention to avoid the lawyers. The fourth stage presents a mid-boss in the form of a fire-breathing armadillo who unsurprisingly rolls into you, also being evasive and frustrating to hit. The end of the fourth level sees the winged Animal Cupid return with a partner, a genetically-beefed green mutant with the also great name of Frankenman. This battle and even the armadillo are arguably a bit tougher than the final battle against Dr. Bio, who just floats about on a hover scooter and shoots you with a machine gun until you knock out his life bar and, surprise, he’s really a killer robot. Even in this form, he’s not too bad if you can step out of the way of his chainsaw arms, but his missiles may take a little more effort to avoid.

Outside of the bosses, but there really isn’t much else to be said about the otherwise straightforward Silent Dragon. Its graphics aren’t bad, though East couldn’t quite match Taito’s usual style, yet sprites do have slight scaling technology when heading towards the background in a neat touch. The music is also a far cry from Zuntata’s catchy and experimental tracks, though it’s fairly upbeat and samples are amusingly taken from Close (to the Edit) by the Art of Noise. Aside from its boss weirdness and blowing up enemies with old-timey dynamite, there’s not much reason to recommend Silent Dragon over most brawlers of the time. It’s not really bad, but something about its programming feels a bit chintzy and it teeters over the edge of mediocrity. It’s only after you’ve run out of truly juicy ones that this game is worth checking out, so if you already know Alien vs. Predator inside and out or can beat Turtles in Time without continuing, you may as well play Silent Dragon just to have one more scroller under your belt. 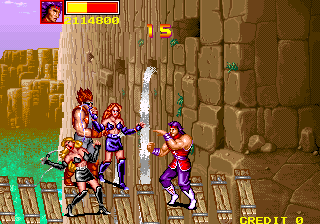