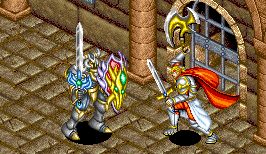 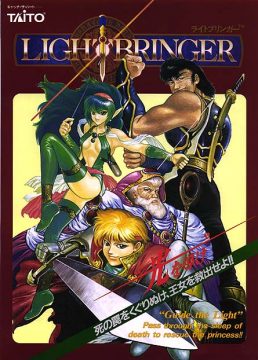 Taito was a company which understood the concept of innovation. Sadly, they seemed as conscious of the dying popularity of the beat-em-up as other developers did in the mid-nineties and they decided to stop making such games altogether, but not before releasing what may be their finest and most elaborate two-players-versus-an-evil-army game. It was released in 1993, the year when Taito decided that their games needed multiple names across different regions, though it only has two unlike RayForce. Known elsewhere as Lightbringer, it’s known in English territories as Dungeon Magic. With an overall feel that seems inspired by Dungeons and Dragons (and released a year prior to Capcom’s D&D: Tower of Doom), the setup is the basic “evil wizard kidnaps the princess so four heroes set out to rescue her” type of deal. The game is unrelated to the NES dungeon crawler, also known as Dungeon Magic. That game was known as Dungeon & Magic in Japan and was published/developed by Natsume, but published in America by Taito. 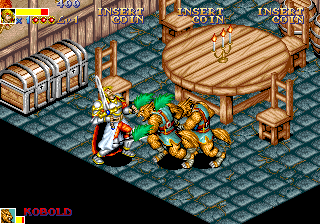 While seemingly clichedd at first glance, there are three notable factors of Dungeon Magic’s design that sets it apart from the rest of its ilk. But before getting to that, meet the heroes: Ash the young knight, Gren the scar-faced fighter, Cisty the elven archer, and Vold the old wizard. Each character has your basic attack combo in addition to jump, grab, and dash attacks, as well as magical super attacks that make them temporarily invincible at the cost of one stock, with three given out per life.

The four warriors play remarkably different from each other, but Ash, who seems like he would be the well-balanced average guy, is actually the toughest character due to slow attacks that leave him vulnerable. However, he hits hard and has the best throw, so expert players can get a lot of mileage out of the lad. Gren is a more well-rounded brawler who sticks mostly to his fists, except for his charge attack where he draws out the sword on his back. He’s faster than Ash and is arguably the easiest character to pick up despite his short range. Cisty is a decent close range fighter and has a powerful if somewhat unpredictable magic attack, but her true strength lies in her long-distance charge shot. Her archery skills make her better suited to playing evasively; this is the same case with Vold who, despite weak physical attacks, may be the most powerful character in the game once he gets a new staff. His charge attacks absolutely maul anything on screen with a large burst of magical energy, and he may be a better pick than Gren for more defensive players. 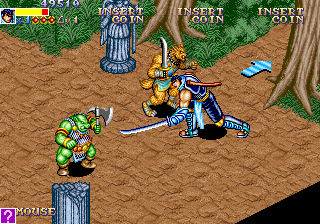 Character diversity is all well and good, but what really makes Dungeon Magic unique? First off, it takes place in an isometric perspective instead of the typical belt-scrolling linear setup. Very few beat-em-ups have ever been made with everything at a skewed angle, with only the Last Ninja series currently coming to mind. However, your characters only ever face left or right, which seems weird at first but keeps the action simple. The odd viewpoint compliments the fact that most stages have multiple paths and encourage exploration. Treasure chests and hidden goodies lie all about, but you are antagonized by a fair variety of creatures while exploring, which leads to the next point: many enemies can actually be bypassed if you head right for a nearby exit. You can avoid about half of the monsters in this game if you just want to speed on by, though taking the time to explore a room may require that you thrash everything on screen… or at least jump around a lot to avoid them. There’s a fine wealth of orcs, skeletons, knights, lizardmen, and other vicious minions that will do what they can to halt your quest, so it’s up to you whether you want to waltz on by or slay them and reap the experience.

As mentioned before, you’re rewarded for exploring areas, as beating enemies and picking up treasure items have you gain levels that increase the damage you take and deal. There are lots of breakable pillars and statues every which way you go, usually filled with gold or gems and sometimes healing items. You’ll sometimes find smaller weapons which can be thrown for a use and shields which absorb some hits for you before breaking. Some items, like crates and boulders, can be picked up and rearranged to reach higher areas that may contain greater treasures. If you find a golden treasure chest, it will contain a new weapon for one of the characters with a fire, ice, or lightning elemental alignment. There are even rarer and more powerful weapons available for especially savvy players, and if you get Vold’s Holy Staff, its fully charged attack is a lovely game breaker. 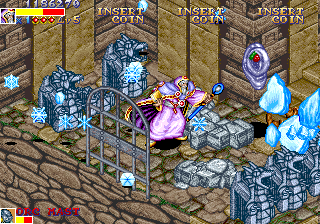 You’ll need every advantage you can get to clear the game’s four stages, the first three of which are gigantic and offer multiple pathways to choose. This offers some replay value, as one path you take could lead you into conflict with Amazon warriors, and another could bring you to a massive fire-breathing snake, or you could end up dodging these perils entirely with another route. A map opens up in each new area to give you a general idea of where you are, though the final stage is only a few rooms large and only has a single path. And yes, there are bosses, ranging from a dark knight with a possessed sword to a spider queen with lots of minions to spare, likely taking you a credit or two to beat. 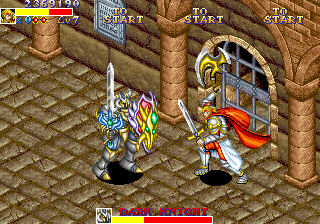 Dungeon Magic is admittedly a bit slow and clunky in its action, so its more deliberate pace may not be appreciated by less patient gamers. It’s a bit of an acquired taste, and it does take a fair deal of quarters, but its unique stage structure and varied characters make it worth more than a play, not to mention how gorgeous it looks and sounds thanks to the good old Taito F3 System. Zuntata goes for an appropriately dark medieval soundtrack and feature some good tracks, particularly the heroic first stage music and the urgent boss theme. It’s just an incredibly well-crafted game all in all, and the topper is that it even allows for a maximum of four players. Even if it’s lacking a bit of personality that Taito’s previous brawlers had, Dungeon Magic is a fantastic swan song for the genre’s heyday. It was regarded well enough to receive a second chance on the Taito Legends 2 compilation, so take up thy weapon and slay yon vile demonspawn for the good of the crown.