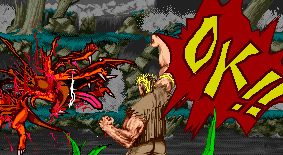 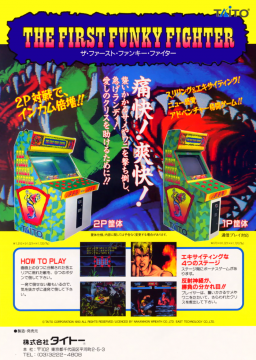 Games have constantly evolved as a medium as the years go on, telling stories in ways that movies and books can’t always do. Graphics and storytelling have evolved, making one seriously question if games can truly be art. However, there’s been one very important category that games have been truly lacking in, and one that’s sadly been never addressed by the developers of the world. You can have the finest graphics, music that drives people to tears from its beauty, and a plot that makes you sit and question your own existence. But you’ll never have the feature to tear a shark in half with your bare hands. Final Fantasy VII? It gets a zero in the category of ripping a shark in half. Half-Life 2? Zero. Sonic 3 & Knuckles? Zero. The First Funky Fighter? Ten out of ten. 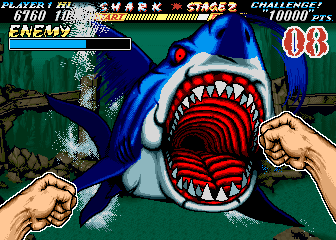 The First Funky Fighter might just be the manliest game ever made. Especially considering that it’s a redemption game at its core, which isn’t really something that makes people think “hardcore”. And yet somehow, Taito has come up with a game where you’re not only encouraged to beat down giant crocodiles with your bare hands, you can earn actual prizes for it. This is the sort of thing gaming was made for.

You play as Randy, some shirtless guy who may or may not live in prehistoric times. It’s not entirely clear. After Randy’s girlfriend Chris is captured by some kind of winged crocodile/dragon, Randy goes on a quest to rescue her. You’d think from the description that this will involve some kind of grand quest to get her back. Randy, however, decides to take the much more effective route of beating the crap out of everything until he gets her back. There’s four stages before you can save Chris, two of which put you against a shark, the other two against a crocodile. The crocodile stages take place on land, where you’ll beat the hell out of crocodiles and tribesmen, while the shark stages let you go berserk on fish and turtles with a machete. Besides the looks, all four stages are basically the exact same, and stages 3 and 4 are just palette swaps of 1 and 2. 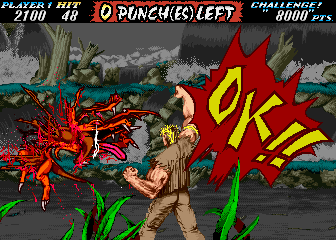 The game is split into nine squares, each of which corresponds to one of the nine buttons on the cabinet. By tapping one of the buttons, Randy will attack that square, probably utterly liquefying whatever happens to be occupying it at the time. Enemies and items will pop out of one of the squares, and your job, for the most part, is to hit as many of them as you can before time runs out. It’s basically Whack-A-Mole meets Fist of the North Star. Really, that should be all you need to know. The entire game is basically just this concept for all four levels, except that you’ll use a machete to cut enemies to shreds in the shark levels. There’s also power-ups you can punch, like a drum of nuclear waste that vaporizes every enemy on the screen in one huge explosion. But not you, of course, because you’re just too damn awesome for that. There’s generally no reason you DON’T want to mash every button as hard as you can, because there’s nothing you can hit that will penalize you, so feel free to pound away at your number pad like a madman.

At the start of every level, you’re given a score quota you’ll be expected to meet. For the most part, the enemies that appear on screen will never hurt you, and the worst that’ll happen is that they’ll disappear before you can actually get a hit on them. Some enemies will also take multiple hits, or split into even more enemies you’ll have to bludgeon. Once the timer reaches the halfway mark, however, a midboss will show up. This will either be the winged reptile from the intro for the crocodile stages, or a giant fanged fish for the shark stages. Randy’s expression of utter terror when they appear should serve as a warning that these guys actually CAN kill you. You kill midbosses by getting a certain number of hits on them as they move across the screen. Get the hits in before time runs out, and you’ll blow the boss to pieces, along with getting some bonus points. If time runs out, however, they’ll take a bite out of Randy, and you’ll have to insert another credit to keep playing from where you died.

After one more segment of beating on fodder, you’ll reach the boss of the stage, either a giant, bipedal crocodile, or a pissed off shark. These fights are all about mashing, because you’ll need to pound the bottom left and bottom right buttons as hard as you can to reduce the bosses health to zero. Even when you do this, though, you’re still not done, because the boss will apparently go Super Saiyan and attack you one more time. It’s here where your score matters, because the closer you are to your quota, the less punches you’ll have to get in before you can finish them off. And finish them off you will, oh yes. While all you do on the crocodile is sending him plummeting to the ground with a Mortal Kombat-style uppercut, for the shark… Randy grabs the shark’s mouth with both hands, and pulls so hard he rips the shark in half with his bare hands, sending its internal organs flying through the air.

There are also a couple of bonus stages as well, one of which involves mashing a couple of buttons to build up enough power to punch through a pile of rocks. Not quite “tear a shark in half” level of badass, but not bad. After all four stages, Randy and Chris are reunited, and that’s the game. After Stage 2, the whole thing really peters out, but the rest of the game goes by so quickly that you’ll probably want to go ahead and finish it up.

The visual presentation is pretty decent, although everything happens so fast you’ll hardly see what’s going on. Each of the two level types have their own set of enemies to destroy, as well. The crocodile stages, for example, have giant spiders, tribal-looking guys, and, for whatever reason, big-busted crocodile girls who have dresses that explode when you punch them. …Huh. The game’s actually fairly bloody, too. Most of the enemies you punch will only end up falling to the floor, but a certain few will explode into a bloody mess. The midbosses show this off especially well, since they’ll start to fall apart with every hit you land on them, until they end up missing wings and chunks of flesh. The voice acting is pretty cheesy, as you’d expect for a game of this time period, with Randy yelling out “OH MY GAH!” every time you end up losing. The music is pretty unremarkable, especially considering you’ll probably never hear it over the sound of beating everything.

Overall, The First Funky Fighter is a game you’ll more than likely play only once or twice. It blows its creative energy halfway through. But for that first half, it’s definitely a game that’ll make you feel like a man. And any game that lets you rip a shark in half should have at least a few of its issues ignored, really. Due to its unusual control scheme, the game would never see a port to anything, which means that MAME is probably going to be the only way you’ll encounter this piece of testosterone.

Links:
Blame the Control Pad Another review for The First Funky Fighter.