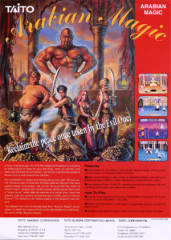 Everyone and their grandfather has likely heard of Prince of Persia, having been released on about 20 different systems and rebooted twice over for later generations. The cinematic action platformer’s Arabian theme and impressive animation were considered to be like nothing else at the time. Slightly less but probably enough people have also heard of Golden Axe, Sega’s seminal fantasy hack­-and-slasher, which proved they could do beat-em-ups before Streets of Rage. Taito also made a fair number of games in that style, almost enough to qualify as the honorary fifth member of the “Big Four” in that genre, even if not quite as much as Sega, Technos, Konami, or Capcom. Combine the 1001 Nights-style atmosphere of Prince of Persia with the action template of Golden Axe, and this gives you Taito’s Arabian Magic, yet another product of their high quality 90s arcade run.

No strangers to belt scrollers by this time, having made the delightfully insane Growl and The Ninja Kids, Arabian Magic is decidedly less offbeat than those two games, but still has plenty of thrills and zaniness in its stages. The premise sees a benevolent king transformed into a monkey by the evil green sorcerer Baruantess. Unable to perform his sovereignly duties, the king must count on the strength and bravery of four heroes to slay Baruantess and undo the curse: Rassid, Lisa, Sinbad, and Afshaal. Rassid is the easiest to play, being fast but with no special techniques. Lisa’s magic shroud fires off projectiles, and she has a very powerful spinning attack, but she can’t take much damage. Sinbad is a bit slow, but he can deliver charged-up slashes. Afshaal absorbs much punishment, and in addition to his morning star, he has a Blanka-esque roll attack. For their different attributes and abilities, they can all throw enemies if they get close enough, as well as block by holding the attack button. Treasure chests containing power-up orbs allow them to shoot fire and lightning, and their ace in the hole is the classical magic lamp, calling forth a genie who tosses out powerful punches and wind gusts while making your character entirely invincible. 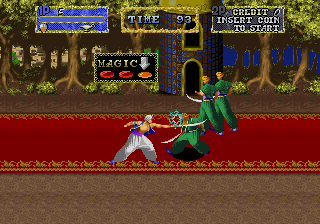 Your quest to return the king to humanity takes you across seven levels, all of which are colorful and lavishly designed. Arabian Magic is one of the first games to run on Taito’s F3 system, the same graphical hardware that would later go on to support Rayforce and Darius Gaiden, among other gorgeous games. There are several opulent palaces to raid, a desert with an antlion whirlpool, and a pirate ship, along with several other zany locales. One stage takes place in the skies courtesy of magic carpets, and the entirety of level five shrinks you down, where fighting takes place in front of a bunch of street merchants. Magic pots keep warping you through various strange locations, including some strange, crystalline dimension, and the fully-breathable ocean, where you fight skeletons for some inexplicable reason. Speaking of, you encounter a fair variety of enemies ranging from basic swordsmen and knaves with throwing daggers, to living terracotta soldiers, wizards who generate snakes, magical dancing ladies, and several burly musclemen who serve as midbosses.

Of course, there are bosses to fight, but an interesting twist sees some of them join you after you defeat them, becoming summons that randomly appear from magic lamps instead of the genie. This includes Asura, a six-armed war deity full of swords, Kanjiji, who’s basically a much bigger and older Dhalsim, and a quartet of doppelgängers all looking like monochromatic versions of the heroes. Bosses who don’t join you include a tall, dual-wielding swordsman, a mythical Roc bird that’s so big that you only see its talons and head, and a gigantic squid with, what else, deadly tentacles and ink. Most of the fights are tough and may take a life from you, as is to be expected from this genre, but they can be beaten if you play it safe. However, the final confrontation with Baruantess will blow away your credits like grains in a sandstorm, especially once he calls in his magical flying beast mount, and afterwards, he starts cloning himself a la Shredder from the first TMNT arcade game.

While Arabian Magic may not be all that different from your conventional beat-em-up in terms of quarter-eatery, its medieval, storybook-like Middle Eastern setting was rather unique for its time. Interestingly enough, a year after Arabian Magic, Sega would attempt their own take on the same theme with Arabian Fight, which featured giant sprites with impressive scaling technology. Despite being the older of the two, Arabian Magic ultimately stands in time as the better game, yet it just doesn’t seem to be as well-recognized as Taito’s other beat-em-ups. It lacks the silly Greenpeace ethics of Growl, the wacky marionette stylings of The Ninja Kids, the unclassifiable insanity of Pu·Li·Ru·La, the double-screen setup of Warrior Blade, or the innovative, multi-path layout of Dungeon Magic / Light Bringer. Even so, it doesn’t deserve to just fade off into the dust like an ancient sultan’s lost treasure in the khamsin winds, so sharpen your scimitars and save the king from his simian fate!

In fact, you don’t even have to resort to emulation for the task, as Arabian Magic exists on the Taito Legends 2 compilation, released in 2006 on the PlayStation 2, Xbox, and Windows platforms.