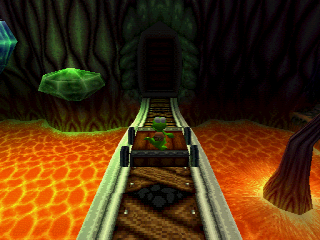 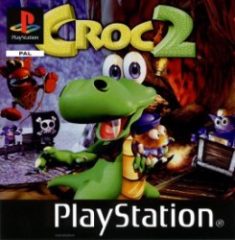 Croc 2 begins with Croc finding a letter from what appears to be his lost parents. Although he cannot read he recognizes the reptilian footprint on the letter as looking like his own. King Rufus decides to help in typical Gobbo fashion by making a giant catapult and shooting Croc to the nearby set of islands in order for him to reunite with his parents again. Meanwhile, a gang of Baron Dante’s followers have resurrected him in order to continue their reign of terror. Croc begins to ask around for his parents but quickly finds out that the threat from Baron Dante is bigger than ever before.

At first glance the two games are very similar with four differently themed islands with two bosses each that Croc must traverse in order to achieve his goals. However, all the levels in Croc 2 all have specific mission to them instead of being linear.

Croc 2 has a fully explorable hub with NPCs and a shop. This shop is manned by the somewhat creepily Cheshire-cat grinning Swap Meet Pete, who can also transport you between hubs. The shop offers three selections of items, with crystals acting as currency instead of health in this game. There are a hundred crystals in every level with fifty being awarded for every boss defeated. Inside the shop you can buy additional health, clockwork Gobbos that can be used to explore parts of the level Croc can´t normally reach and finally jelly which is used to increase your jumping ability. There are three kinds of jelly, each increasing Croc’s jumping distance a bit. This shop system doesn’t really add something to the game except forcing the player to go back into already done levels and grind for more crystals. Forget Baron Dante, the greatest enemy of Croc is the usual unwillingness of video game shopkeepers to part with goods needed to save the world!

The variation in level design has improved a lot in this sequel, particularly in the second world where nearly every level has a gimmick of some kind. Gimmicks are usually seen as something negative, but although these levels change things up a bit the ideas are so interesting and the controls so good that the player will not mind the changes in gameplay at all. The most memorable one is the hang-glider level, which sees Croc flying over a lava-filled chasm rescuing Gobbos stuck in the ice or tied to balloons. Croc rides updrafts and has to fly through rings of crystals in order to collect them. Collecting a hundred crystals in this level is quite difficult. In order to collect the last crystals, Croc must land in the middle of a large target at the end of the level. The whole thing is strangely soothing and it would have been great to see more, perhaps as some kind of bonus level.

The second game has a completely different health system, although it isn’t much better than the one found in the first one. You start with a potential for two health points and can then buy more for a maximum of nine. However, total health acts as your number of continues in a given level. The system is not logical at all and not explained that well in them manual, but it goes a little like this:

You enter a level with, say, nine health and die. You then start with eight health, losing one point each time you die. Enter a level with two health and you only have two continues before you are booted out of the level to try again from the start. This often leads the player to kill Croc off at the start of every level in order to have the maximum number of continues. The worst part is, if you try to max out healing immediately you won’t have enough money to buy all the jelly and clockwork Gobbos needed for 100% completion, leading to even more grinding for crystals.

In the second game, bosses are divided into two types – Guardians and proper bosses. The Guardians are all animals native to the setting of the hub level and presumably transformed by Baron Dante’s evil magic, although this isn’t shown in cut scenes like in the first game. The Guardians can be fought anywhere after clearing a set number of levels in the hub. The proper bosses are always fought after all other levels in a hub have been cleared, and are all followers of Dante. A good example of a fun boss is a giant squid called Soveena, who acts as the very first boss. She is after the sailor village’s entire storehouse of ginger soda (the drink is a sort of running gag through the game). The player must navigate some wreckage while holding boxes of explosives in order to fend of the giant cephalopod and save the day.

All the hubs have some sort of optional mini-game that gives you extra crystals and they range from everything to building a snowman to a ginger soda burping contest. Since crystals are in such short supply, if you want to get everything in the game, these quests are very welcome, although normally you can only do them once.

Unfortunately, the game feels unfinished. The fourth hub only contains two levels, one of them being a really boring collectathon where the player is forced to find 30 Gobbo babies and put them in their playgrounds. This involves bringing the babies in one by one and carrying them slowly at the same time as the player is attacked by enemies. To say that this is an exercise in tedium is to give the level too much credit especially considering the crying noise the babies make.

The secret levels work exactly the same as they did in the first game. They are still more labyrinth-like and harder versions of the preceding levels, but this time they come in two types. One type is the same one as the last game with puzzle pieces as a reward. There are also “hidden villages” which are opened up after the endgame. They are just the normal hub levels, but void of NPCs and filled with enemies. It is quite creepy, in a way. The concept is quite interesting, especially since it turns the large and mostly empty Aztec hub into an actual level.

The second game is giant leap forward compared to the first one, so a third Croc game could have hopefully ironed out all of the flaws. Sadly, apart from a rumor and some concept art which turned out to be an elaborate hoax, no more sequels were planned. Perhaps the audience perception of these games was too low; the protagonist a little too blandly cute to stand out on its own (it was the age of mascots with attitude, after all). The engine was used in several other licensed games, including Aladdin in Nasira’s Revenge and Harry Potter and the Sorcerer’s Stone, plus the Xbox platformer Malice began life using this engine. Croc himself continued in a number of portable titles. 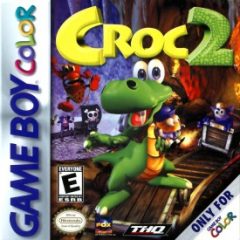 The second Croc game for Game Boy Color is an isometric platformer made by Natsume, the creators of the Harvest Moon franchise, amongst other assorted 8- and 16-bit action games. It uses an overhead perspective and focuses on exploration. It also has cutscenes (which follow the plot of Croc 2), the shop from Croc 2, and an inventory. The problem with this game is that it is just too big – the scenery looks exactly the same wherever you go, and there is no map whatsoever. The game does use the same system as Croc 2 where the hub leads into levels with different missions. However, while the missions could influence the gameplay of the levels in the PlayStation game, in the Game Boy version all missions are just a cover for the same bland labyrinths. The music is terrible, and sounds like beeping with no melody over and over. The hit detection of your attacks is off, leading into enemies hitting you over and over without you being able to retaliate. The only neat part of the game is Croc’s cute cry as he falls – unfortunately hearing it requires you to kill the poor crocodile over and over.

A few years after the release of the Game Boy Color games, Croc was resurrected for three mobile titles. Two of them, Jungle Rumble and Volcanic Panic!, are isometric platformers. They were developed by Morpheme Wireless, an England-based developer of cellphone based entertainment products. Interestingly these two games acts as a sequel to Croc 2. 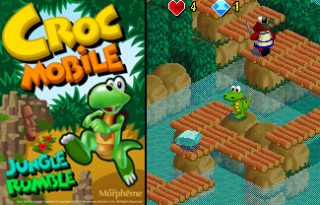 During the wedding of king Rufus and the princess of another Gobbo tribe, Baron Dante appears to kidnap them and put the lovely couple in a great jungle and volcano, respectively. The games are quite basic in nature. In order to clear an area of the game Croc must save all the Gobbos of any given level before leaving, with bonus points awarded if all crystals of a level are collected. Like all isometric games there is a certain difficulties in judging distances which results in unnecessary deaths. The two games are both played in exactly the same way and apart from the level theme, they’re basically the same. The action is also choppy, as it was made for mid-2000s Java-based mobile phones, which rarely produced playable experiences. 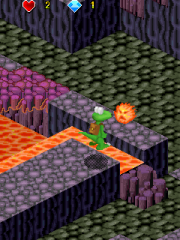 The third mobile game is Croc Mobile Pinball. This game is a simplistic pinball game with a single table suited for very young children. Like in all pinball games there are areas and objectives that give you extra points, but there is not much more to say about it. A problem is that the ball sometimes sticks to walls and even the bumpers, slowing the action down to a crawl. 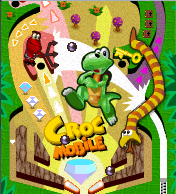