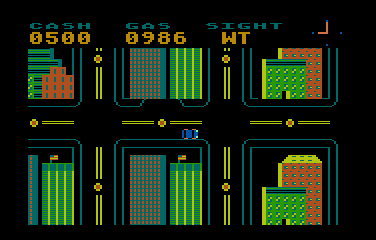 In Synapse’s NYC: The Big Apple, developed by Russ Segal, you control a tourist who simply wants to see the sites of Manhattan. It would be straightforward, if not for two major issues: New York City is not only incredibly expensive, but also (at least in the early 1980s, fairly dangerous.

The game begins in your car, as you explore the island of Manhattan, which is laid out in a grid (closer to a square grid than the standing rectangle it is in real life). One of the main goals is to visit the important tourist sites, as the status bar at the top of the screen indicates your next destination. The locations of these are mostly randomized every playthrough, so actual knowledge of New York City’s layout won’t help much. Throughout the entire game, you need to be mindful of two dwindling resources: your money and your car’s gas. The gas drains normally as you drive it, though if you run over the dots in the lane dividers, you’ll drain it very quickly. Money basically acts as your health, as it gets depleted any time you take damage, plus you need it to refuel your car, among other uses. If you run out of cash, you lose the game. 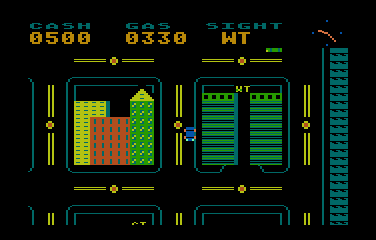 The streets aren’t nearly as clogged with traffic as one might expect, but you do need to drive at least somewhat carefully so you don’t crash. (Amusingly, the CPU controlled cars will often crash on their own, a rather nice detail that makes the city feel more realistic.) If you do bang up your car too much, you’ll end up getting sent to the hospital, as well as your car repaired and impounded, an event so catastrophically expensive that you may as well restart if it happens early enough. Most tourist spots won’t have parking spots either, so you need to find one at a building nearby, and try to avoid the lots that will charge you to stay there.

The main tourist spots are the Empire State Building, the United Nations Building, Grant’s Tomb, the World Trade Center, the Citicorp Center, and City Hall. When you enter one of these buildings, the view zooms in with a fairly impressive scaling effects (at least for an 8-bit computer), and then switches to a side-view minigames. For these destinations, the goal is basically the same – climb the ladders, avoid the two bad guys, get the pretzel at the top of the screen, and then climb down. At first this is trivial, but later iterations take the floor away from beneath the pretzel. Those bad guys somehow have the ability to create platforms, so you need to lure them up to the top so they’ll create the necessary floor, run back around, grab the pretzel, and then escape. 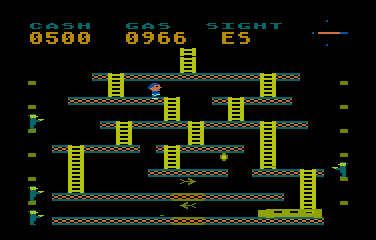 There are several other locations that open and close over the course of the game, each with their own unique minigames. Some of these are self-explanatory, or at least easy to figure out. In the Subway levels, you need to descend ladders while dodging the bullets from crooks on the side of the screen, grab the token, and then wait on the train platform. At Central Park, you need to round up escaped zoo animals by building fences around them.

Others are rather obtuse if you aren’t reading the instruction manual. At the Automat, you need to walk to the top of the screen and press the action button, which will cause you to order a hamburger, which has two legs and pops up randomly on the screen. There’s another hungry fellow here with a Pac Man-esque face who’ll eat your lunch if you let him, so you need to grab the burgers before he does. This is a frustrating area because you need to eat ten hamburgers to win, but each costs $20. Therefore, you need to enter with $200 at minimum or else you’re doomed to fail.

The Post Office is more insane. It’s set up like a somewhat complex game of Frogger, with various obstacles in each line of the screen. First, you need to grab a blue letter from the bottom, which flash around randomly. Then, you need to dodge the mail carts and the dog to put that letter on a gigantic stamp, and take it back before you get smashed yourself. Then, you deliver it to the particular mailbox on the top of the screen, and then you’ll beat the level. The Mart is rather inexplicable, as you need to maneuver through a section of shifting walls to deliver pretzels to the four corners of the screen, while avoiding the guards spread around. 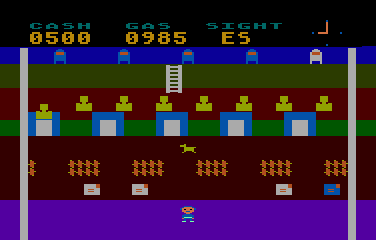 The Bank is the only place where you can replenish your cash. Unfortunately, it’s also constantly in the midst of a bank robbery. To reach the top of the screen, you need to dodge the fire from the criminals on the sides, and weave between the armies of bad guys in the center. When you reach the top, you’re rewarded with $500. Technically you can do this several times to withdraw even more money, though reaching the goal even once is fairly challenging.

Once you’ve successfully visited all of the buildings, then you’re set to check out City Hall, at which point you’re rewarded the key to the city. While there are points, the score is hidden from the player through most of the game, as your rank is revealed only on the Game Over screen.

NYC is a fairly remarkable title – its open world urban nature has drawn comparisons to it being a prototype of Grand Theft Auto, though only slightly, especially considering your character has no weapons of their own. But the variety in minigames, as well as the randomly generated nature of the city, ensures a game that’s constantly challenging, plus the surreal nature of pretty much everything is signature of this particular era of gaming. If there’s any actual flaw, it’s that it could’ve used a difficulty level selector, because some of the minigames are just way too difficult. 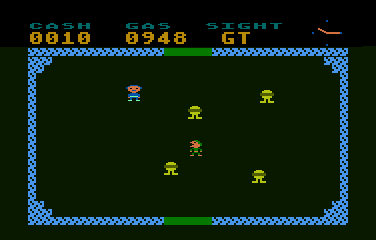 While NYC was initially released for Atari 8-bit computers, it was later ported to the Commodore 64 by Greg Nelson. This version is a substantial downgrade, as the speed is much slower and the visuals are worse. There are a variety of changes too – for example, in the Atari version, you start crossing a bridge from the west side, while in the Commodore version you start in a parking lot. The schedule when certain places open and money amounts spent on certain things are also tweaked a bit too. 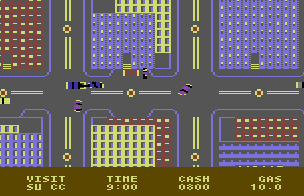 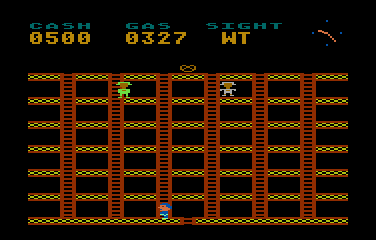 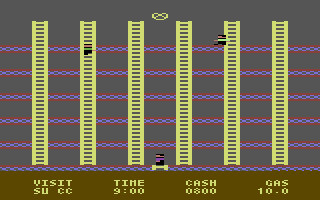