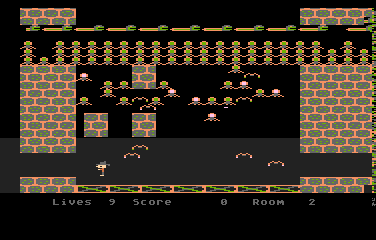 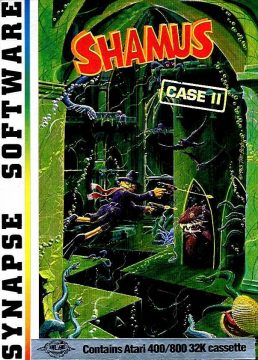 The follow-up to Shamus tries something completely different, shedding its Berzerk-esque gameplay for something a little bit more original. It’s actually a side-scrolling (sort of) action-shoot-em-up-platformer hybrid, while still maintaining the light exploratory elements of its predecessor. 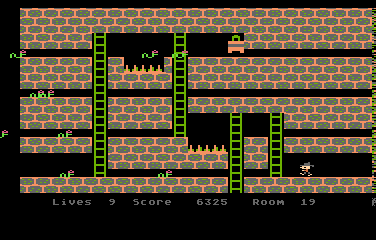 You still play as the robotic Shamus, who must escape from the Shadow’s hideout and ultimately destroy it. There are three types of rooms to conquer. The first type, “pit rooms”, are filled with ladders and spikes, as well as snakes that crawl through passages that are too small for Shamus to fit through. These rooms are straightforward enough, though they often have locks which block progression, and chests which either grant extra lives or keys to open the aforementioned locks. The second type of room, “corridors”, are fairly plain screens that just consists of one of more pits, plus snakes that crawl in from the sides, and regular appearances by Shadow, who bounces around and shoots. 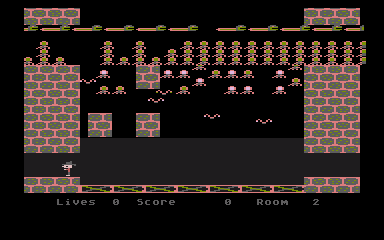 However, you’ll be spending most of the play time in the third type of room, which are shoot-em-up sequences sort of like Galaga mixed with Breakout. Enemies (mutant crustaceans, according to the manual) attack from the top of the screen, while Shamus uses detonator balls to attack upwards. These aren’t simple bullets but actually reflects off the sides of the playing field. Parts of the floor can also be destroyed by baddies if they get too close, and if all of them are broken, then Shamus is sent tumbling back down to the prior screen. One of the enemies is a bird, which will flash when hit; whack it enough times and it’ll turn into a spiral blade which will tear through foes if you hit it, which is a huge help. The main goal here is to defeat the row of snakes at the top. In many screens, directly beneath these are solid moving blocks, and if you manage to sneak one of your detonators past them, generally they’ll bounce around and take out a bunch of snakes at once. Alternatively, if you can’t quite destroy all of them, then the game proceeds once you’ve beaten two waves of regular enemies.

These shooter scenes are almost be novel enough to stand on their own. The issue is that they’re just part of the larger Shamus: Case II game, and pacing just hits a brick wall when you have to play them. They generally go quickly even if you can’t destroy the snakes, but you often need to play them a few screens in a row. Also, when you beat a stage, it scrolls upwards while you’re still in control of Shamus. If you smack into part of the ceiling, you’re knocked back down and need to play the scene again. You also need to make sure to find solid footing before the screen stops scrolling because otherwise, again, you’ll find yourself on thin air and find yourself plummeting back downwards, Wile E. Coyote-style. 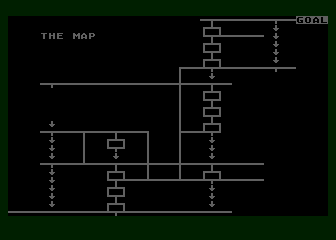 Even without this somewhat tedious aspect, the screen layout is disappointingly simple. The maze layout is 10 squares wide by 13 squares tall, but there are only 38 actual screens, so much of the grid is simply unused. The developer was nice enough to include an automap in this game, but in practice, it’s not really complicated enough to need it. On the plus side, it’s actually much more manageable to beat compared to the nearly hour-long marathons required for the first game.

Even though it doesn’t entirely work, Shamus: Case II is still an excellent effort in the way it reinvents itself into something more unique, and it’s still quite fun in its own right, presuming you don’t keep failing the shooter segments. It was never quite as successful as its predecessor, spawning only one port for the Commodore 64, which is basically identical outside of the visuals. 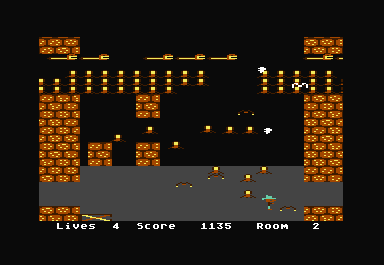