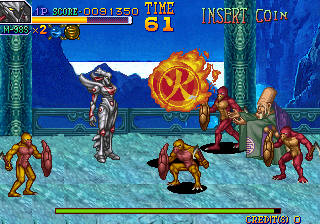 Noise Factory was a studio formed in the late 90s that worked closely with SNK on a number of projects. The most well-known of these including Power Instinct Matrimelee (using Atlus’ IP), Rage of the Dragons, and Sengoku 3. Before these games, and prior to their association with SNK, they created their first title, the beat-em-up Gaia Crusaders.

The  story involves the world being destroyed by demons in the year 20XX. Chosen warriors, the Gaia Crusaders, are sent in by an ancient spirit to destroy the demons and rebuild the world. There is a lot of post apocalyptic imagery including ruined skyscrapers, vast desert wastelands and a ruined Statue of Liberty possibly inspired by Escape From New York or maybe Planet of The Apes. Acquiring seven pieces of The Demon’s Tear can restore the world.

The characters are an anachronistic rag tag bunch, but they certainly get the job done.

Magic Attribute: Fire and Wind
Fred Sathal is one of the faster playable characters. He has some very acrobatic combos, such as kicking with both legs with standing on one hand or shooting energy blasts from both legs. He also wears sunglasses at all times. He is obviously meant to be the “cool” character. How cool he is depends on whether or not you think break dancing as a special move is a good thing.

Magic Attribute: Wind
Jimi Isaak is the all-around fighter, with average speed, defense, and power. He bears a strong resemblance to Cody from Final Fight, which is probably no coincidence.

Magic Attribute: Fire
Kohen is a priestess that always carries around a piece of paper with a magic rune on it. If she hits with a punch as the final hit of her combo, she tosses the rune and the enemy catches on fire. Kohen is very fast and very strong, but she has bad defense and takes extra damage as a result.

Magic Attribute: Wind
Koufu is a wizard, specializing in magic spells such as fireballs and forcefields. He seems to break the trend that wizards are weak old men that do good damage but go down quick. As a result, Koufu has good defense and power, but his speed suffers.

Magic Attribute: Wind and Fire
M985 is a robot that fights with various robot parts, such as arms that can spin or energy cannons in his back. M-985 is very fast and takes less damage through his robotic armor, but he does not do very much damage for some reason. M-985 also has by far, the lamest special move. A very small explosion appears around his legs. It only hits enemies directly on top of you and does the same amount of damage as all the other special moves.

Magic Attribute: Water
Rob is a gigantic blue demon that fights you in the robotic level. He joins to fight with you later on and becomes a playable character. Rob is easily the hardest hitting character, striking harder than even Koufu. He takes normal damage, but he is very slow. Two of his cooler magic attacks involve shooting a laser from his claws (wind) or pulling out a flaming sword (fire).

Magic Attribute: Water
Seiyen is a strange mutant with a hawk’s talon for a hand. He appears as a sub-boss early on and joins you to save the world later. Seiyen is very fast, possibly the fastest character in the game and does respectable damage. On the downside, he takes about as much damage as Kohen. Seiyen also has the one of the best special moves. He slashes in the shape of an X and it leaves the X shape for a few seconds. It is very good for keeping enemies away.

Magic Attribute: Water
Getuki is not playable in Gaia Crusaders and only appears as a boss. She does however, appear as a playable character in the ripoff Thunder Heroes. She is meant to replace Rob, but ends up making no sense, especially because she appears in the boss rush at the end. Most of her attacks involve killer fans. 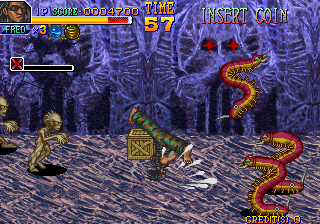 From a gameplay perspective, Gaia Crusaders is fundamentally the predecessor to their later Sengoku 3 (the previous games were developed by a different team and there is little connection between them other than their name). They share some similar elements, particularly the magic effects, a similar combo system, and the presence of a bizarre giant chicken enemy.

As with most beat-em-ups, you can perform a super attack by pressing jump, punch, and kick all at once, which it hits many enemies around you and does a little bit of damage to yourself for using it. You can also put up a shield by pressing jump and kick both at once, which can be handy against opponents that attack from afar. It also adds an interesting magic system. Periodically, colored balls will bounce on the ground. If you pick them up, you get a magic attack. Each magic attack is different depending on each character, as all characters have a certain magic attribute. If the magic matches the character’s attribute, you get a special, screen clearing attack. Otherwise, you simply use a very powerful special move. 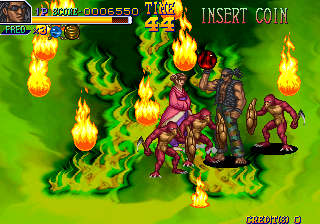 There are some interesting items as well, including two types of bombs, both of which detonate immediately once picked up. The first is an earthquake, which hits all enemies on screen for a large amount of damage, while the second is a random bomb, which sends out pillars of fire at random places, hitting any enemies that touch them. Both bombs can be very useful, especially if you’re out of magic. There are also explosive boxes that can be kicked at enemies to keep them away. One last notable item is the sword, which functions much like weapons that can be found on the ground in many other beat ’em ups.

The levels are pretty imaginative, taking full advantage of the post apocalyptic setting. The first two stages are particularly cool, as the former takes place in the ruins of a temple infested with screeching monkey demons, while the latter is in the ruins of New York City and a strange cave at the bottom, possibly representing the sewers. After going all across the world, it turns out that the final piece of The Demon’s Tear is held by The Demon King, who appears as a knight riding on a horse-like dragon. He immediately jumps off of his mount and the battle begins. Once you think he’s done, he morphs into a huge, demonic version of Guile from Street Fighter and starts using the magic you’ve been using all through the game against you! It’s an enthralling boss fight and a memorable way to cap off very long and very hard game. 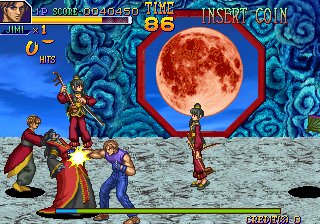 The soundtrack is provided by Toshikazu Tanaka, who also provided soundtracks to many other Noise Factory games and other titles for SNK, including Metal Slug 4, 5 and 7, and The King of Fighters: Maximum Impact titles. It’s not one of his better works, but it’s still fairly decent.

Gaia Crusaders was never ported anywhere and stayed in arcades only. It’s unfortunate but expected for a beat-em-up published in the arcades in the late 90s, well past the genre’s prime. Still, the oddball cast of characters, tight action, and interesting settings make it well worth checking out. 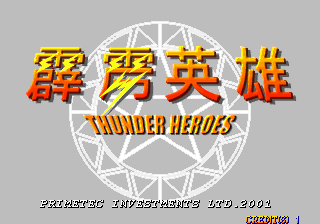 In 2001, a company called Primatec Investments published Thunder Heroes, a glaring ripoff of Gaia Crusaders. To differentiate the characters, most are palette swaps with their clothing changed, though their names are identical. Most of the levels and enemies are also scrambled and palette swapped. Rob is completely absent, with Getuki replacing him. 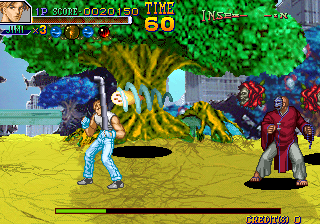 Thunder Heroes is notably shorter than Gaia Crusaders and a lot easier too. There are only five levels, holding one piece of a magic pentagram each as opposed to the seven shards of the demon’s tear. Enemies have less health in general and many weapons that were not in the original are present. New weapons include lead pipes and energy swords, which function just like the sword from the original. The other new weapons are knives and grenades, which are tossed immediately after use. 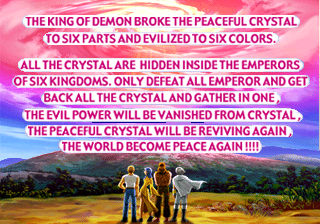 Thunder Heroes in general feels hastily put together, which makes sense given that it’s basically a pirated product. The weapons bog down the fun combo system and feel tacked on, the new character does not add much, and it loses a lot of the great design that made Gaia Crusaders feel so fun. 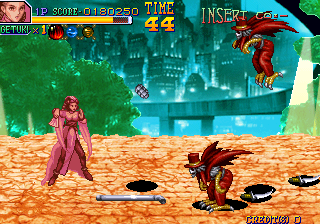