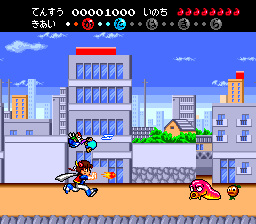 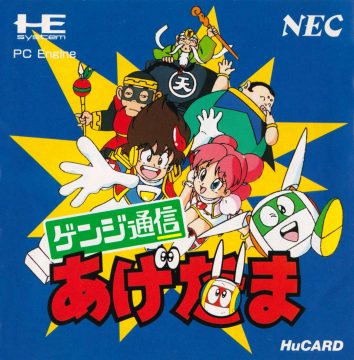 Genji Tsuushin Agedama was created in 1991 as a multi-pronged media property spanning a manga series, an anime TV show, and a video game. It was conceptualized by two writers who would later become fairly well known in the gaming sphere – Akira Sakuma (Momotaro Densetsu) and Oji Hiroi (Tengai Makyou, Sakura Wars). At the core of it is a young boy named Agedama Genji, an alien from the Hero Planet. As for the game, rather being a standard platformer, it’s part of the unusual “running side-scrolling” subgenre, where the screen scrolls automatically, similar to titles Data East’s Atomic Runner Chelnov and Sega/Westone’s Wonder Boy III: Monster Lair. 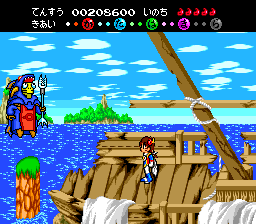 The main gimmick in Genji Tsuushin Agedama is that the hero can charge up his attack to several different levels, resulting in sixteen different types of projectiles, each with different strengths. You can fire tornados, shoot green waves, rain lightning from the heavens, or summon pink genies to pummel things; the strongest level exudes what appears to be a small nuclear explosion. This is not without its quirks, though – if you don’t opt to charge up and continuing nuke your foes, actually picking and choosing specific attacks is very difficult because it’s tough to get the precise timing down – you might want to attack a boss with tornadoes, but you might hold the button a bit too long, and end up shooting a wimpy wave attack. Plus, though your power is limited at the beginning, you can quickly create stronger and stronger attacks through power-ups, and once the higher levels are unlocked, you can perform these attacks with impunity, resulting in a hero that is just a little too overpowered. The game is really only challenging in the final stages, when it introduces some enemies that can’t be only destroyed (only stunned) along with a few tough boss battles. Otherwise, you can steamroll through the game’s six stages with ease. 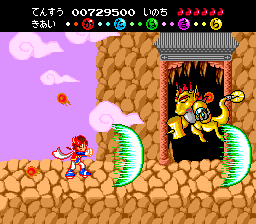 Still, Genji Tsuushin Agedama has such energy that it’s hard not to love – it’s the archetypical PC Engine game, with bright and attractive visuals, and impossibly peppy music, with the first level tine being some of the best chip music on the platform.

Strangely, the game was based on the initial concept of the story, which was originally released in manga form. The characters and setting were revised substantially before being developed into an anime, so by the time the game came out, it barely resembled the TV show it was supposed to be promoting.