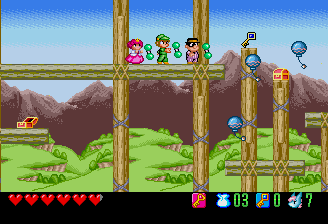 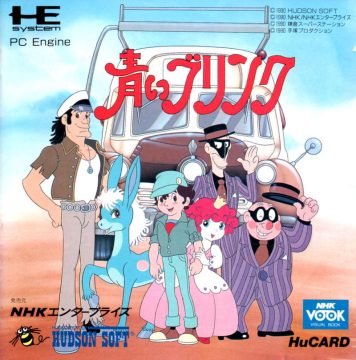 Aoi Blink was an anime produced by Tezuka Productions in 1989, centering on the adventures of the young boy Kakeru, a magical pony named Blink, and their friends as they travel the world to save Kakeru’s father from the dastardly Emperor Gross. Supposedly inspired by the Russian fairytale The Humpbacked Horse, the series is notable for being the studio’s last TV series to be in production while its founder Osamu Tezuka was still alive – he passed away a few months before it began airing, and it was made according to what he’d set out.

Despite this, the show seems to have only become a footnote in comparison to Tezuka Pro’s other works, and the only way to legally watch it in the Anglosphre currently is on the Asian-focused streaming site Viki. However, it did get itself a platformer developed by Westone (the team behind the original Wonder Boy/Monster World games) not too long after its conclusion, and it’s a simple, solid game worth checking out. 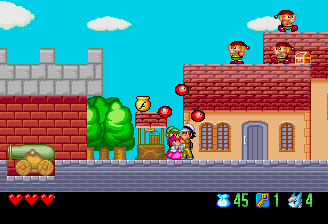 Aoi Blink has you taking control of a party of three characters as you jump and shoot your way through levels. You play as whoever’s at the front of the line-up, and can swap between them with the Select button: Kakeru (who always takes the lead by default) is an all-rounder, Tanba can throw powerful bombs but has a very low jump, Princess Kirara can jump very high but can’t shoot, while the thieving brothers Nitch and Satch offer unique projectile patterns. Swapping characters is very useful as the other members of your team use your main character’s attack, letting you take out multiple enemies or more easily find hidden items on your journey.

Items largely consist on the usual temporary power-ups like invincibility and stopping time, and can be found by blasting pots or opening chests with blue keys discovered elsewhere. Lives can also be found, but they serve a different function from usual – instead of starting the level over when you die, you’re brought back to life with a blast of energy from Blink. You can even pause the game and spend a life to restore some health if you need it, which is a nice help for some of the trickier stages.

The game is split into overworld maps each containing five or six levels to explore. Some stages have more than one exit, leading you to other areas on the world map to explore. It’s important you visit as many as possible, since the only way to fight the world’s boss is to find a special red key hidden in secret areas. Some of these are hinted to you by NPCs at the end of stages, while others just have to found through challenging optional sections. It can be annoyingly vague trying to find the red key, as they only appear by shooting at the right spot in an otherwise innocuous location, but levels are short enough that it doesn’t become a slog exploring every nook and cranny. 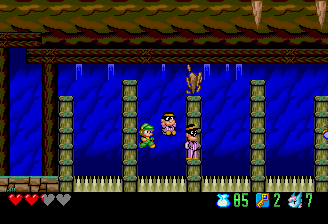 If anything, backtracking through older stages helps because you can restock on power-ups and collect coins, which do something very interesting. Instead of giving you another life, collecting 100 coins permanently increases your health meter by one heart. This lends Aoi Blink an RPG vibe reminiscent of Westone’s later Wonder Boy games, and provides a very compelling reason to see as much of the game as possible.

That extra layer of complexity doesn’t detract from how straightforward things are, which is perhaps the game’s greatest strength. Levels only take a couple of minutes to beat, and being able to move, jump and shoot with such ease creates a strong “pick up and play” vibe that complements the overall design superbly. This is further aided by certain choices like automatically jumping up small ledges when you run into them, or being able to proceed through auto-scrolling stages without being tied to the camera. 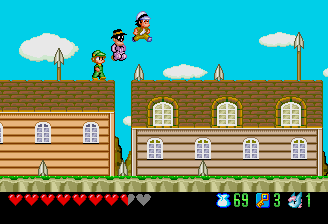 There are a couple of clunky pieces, however. You get significantly less momentum from jumping at a standstill than while moving, and this is exacerbated by how levels don’t let you go backwards. If you miss a jump leading to a secret area needed to progress, you have to beat the level and start all over again. It can be frustrating, but at least stages are short enough to beat and revisit. There’s also no passwords or save function, meaning you’ll have to beat the game on one go, albeit with unlimited continues. Though it’s a short enough game – especially once you know where the red keys are – it feels a bit mean to not even offer passwords.

The boss battles are definitely the worst part of the game. Here, you ride around on Blink and blast fireballs at giant enemies. While they do display some strategic attack patterns, all you can really do is keep pelting them with blasts until they go down. It’s mindlessly tedious in a way that feels at odds with everything else, and makes the lives and extra hearts seem like they only exist so that you can outlast the bosses. 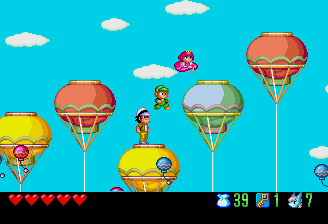 Aoi Blink still manages to shine despite those issues, and the presentation definitely helps with that. The graphics capture the show’s character designs while ensuring they remain readable against the screen very well, and includes plenty of side characters as either NPCs or bosses. Each level features a distinct appearance in their color scheme or design focus, even when a couple of them share the same basic concept, and the game runs well despite the amount of action that occurs.

Musically, the soundtrack by Westone regular Shinichi Sakamoto and one-time composer Souichirou Harada provides a selection of great tunes with a variety of styles and moods, backed by superb instrumentation. The sound effects add to the game’s soundscape, with pleasing sound effects that give each attack and moment their appropriate impact without becoming abrasive. 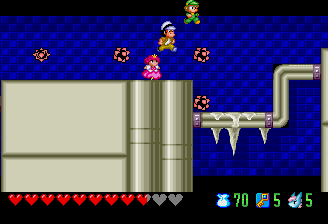 Aoi Blink wasn’t released outside of Japan. While it being a licensed game likely had plenty to do with that, it might’ve been possible to rebrand it given the existence of titles like Dragon Power (originally a Dragon Ball game) and J.J. & Jeff (known as Kato-chan & Ken-chan in Japan, based on Kato-chan Ken-chan Gokigen TV). However, the game is easily playable if you can’t read Japanese, and an English fan translation was produced by Zatos Hacks and Gaijin Productions if you need help from the NPC’s hints.