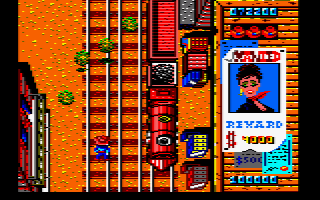 This entry is part 1 of 3 in the series Gun.Smoke
Gun.Smoke

Even before Capcom themselves ported Gun.Smoke for home use, several computer systems saw a release of the game in Europe. Prolific Spanish developer Topo Soft originally made that game as an unlicensed clone called Desperado. Only when publisher GO! brought Desperado to the UK, it got tied in with the Capcom license. Yet the similarity to Gun.Smoke was unmistakable from the beginning. European clone programmers being hired for the official ports of the games they copied are not unheard of— take, for example Manfred Trenz, whose Katakis impressed Activision, the holder of the R-Type license in Europe, so much that they decided to trust him with the C64 version of the arcade hit after the legal struggle around Katakis. In this case, however, the parties involved didn’t even bother to create a new game.

Desperado shared the same general theme and gameplay with Gun.Smoke, but rather than a direct port, it is more like a sequel or inspired game to the original. The controls of course had to be simplified to content itself with just one fire button. That’s only the beginning of the downsizing, though, as many of the extras are missing, too. Now the only pickups gotten from sherriff stars (which replace the barrels) are extra lives and points. There’s no horse, no gun upgrades and no speedy boots.

The five stages are entirely different from the arcade game. While you get the same basic areas like western town, railroad, Native American village, etc., the layouts often don’t even resemble Gun.Smoke. In stage 4 you get to steer a raft through a river full with aligators and tribesmen in canoos, but the actual gameplay doesn’t change at all. Also new is the cast of bosses, now for the first time starring a woman and a kid, but many are based on counterparts from the original in their fighting behaviour.

Due to the technical limitations with choppier animations and completely unpredictable enemy behaviour, Desperadois almost even more difficult than the original Gun.Smoke. Enemies often attack from behind where you can’t fight them back, and the controls are not as responsive as they used to be. At least you respawn at the same position you were killed, but after only three lives (+ picked up extra lives) it’s game over. Only the bosses are surprisingly easy and kind of a letdown after making it that far.

Topo Soft programmed Desperado for the Sinclair Spectrum, MSX (1) computers and Amstrad CPC. The former two versions look and feel very similar, save for the Spectrum’s tighter color restrictions, and for some reason a more narrow playing field on MSX. The Amstrad version has completely redone graphics and faster gameplay than the others, which makes it yet more difficult. It also switches around some of the bosses, but considering how easy they all are, that doesn’t make much of a difference. Typical for many ’80s computer games, none of these versions play any music outside of the title and ending screens.