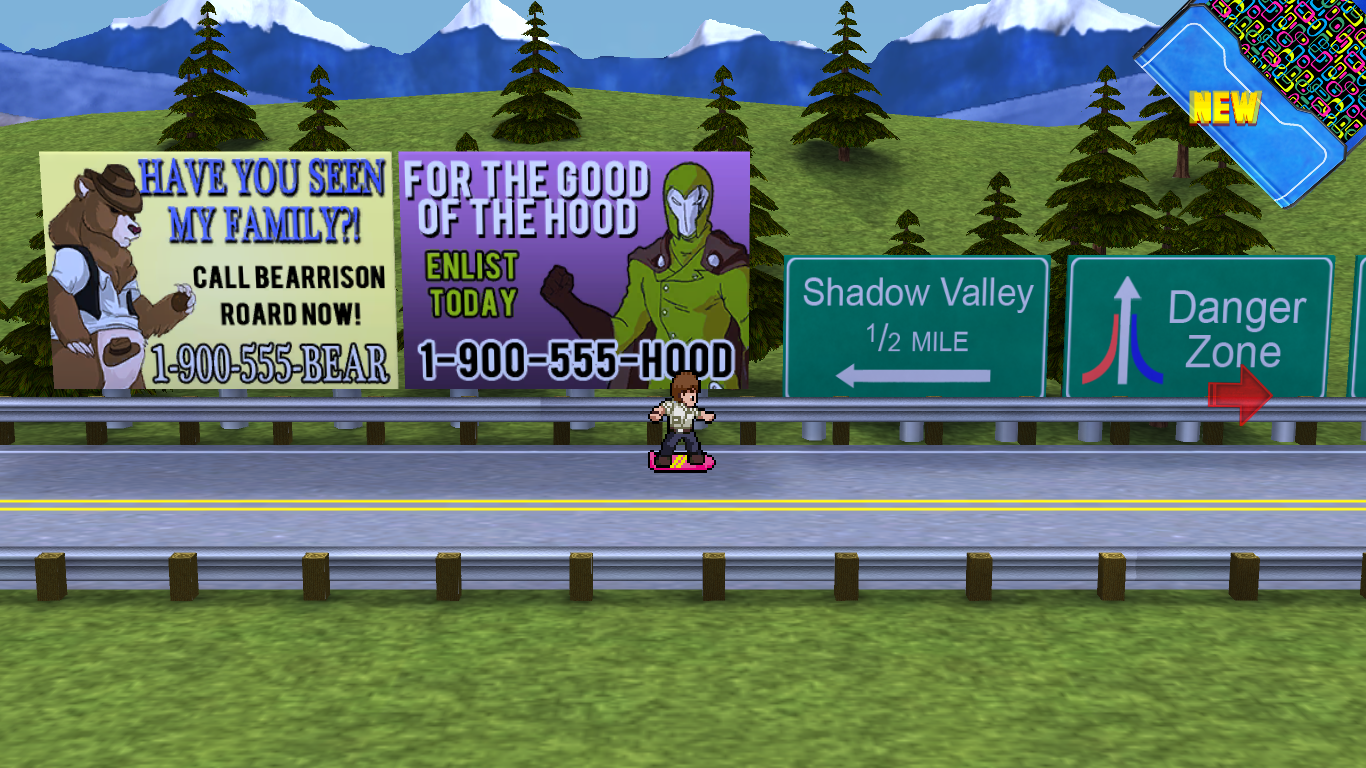 Disclaimer: Developer Mighty Rabbit Studios has been a contributor to the HG101 Patreon but did not request a review nor provide a review copy, which was purchased by the author. The author was not aware of the Patreon contribution, and did not color this review.

There’s an easy way to know if you’ll like Saturday Morning RPG, just judge your reaction to the following fact.

The creators of this game got the actual composer for Rocky IV and Transformers: The Movie (Vince DiCola) to do an original power ballad as the piece for the final action segment. It references “The Touch” within the first few lines.

If you just started feeling giddy, you are going to LOVE this game.

Saturday Morning RPG is the first game from Mighty Rabbit Studios. From the premise, this game is instant gold: A hapless loser named Marty gets a magical Trapper Keeper from a mysterious wizard that looks exactly like the kid on the poster for The Wizard, power glove and all, and becomes a hero who fights expies of Cobra, the Decepticons, and the Empire from Star Wars, among many, many, many other things. His powers include the ability to become stronger with scratch and sniff stickers, using toys to cast incredible magic spells (such as tossing a CD as if it were a Tron disc), powering up like a Dragon Ball Z character, and punching people so hard that they explode.

From the word “go”, this game is endlessly ridiculous and just in absolute love with everything 80s. It’s amazing nobody utters the word “Reaganomics”. The game is divided into five episodes, one of which is an anti-drug special with the not-Autobots and the not-Decepticons being addicted to energy cubes. Another involves not-Cobra Commander stealing Christmas, Marty saving it, and then giving the commander a cool gift because it’s Christmas and the commander actually thanks him for it. None of this is made up. These are actual things that happen. The Optimus Prime expy even says to Marty to show the bad guys that winners don’t use drugs.

Few games are just so dedicated to being so stupid, but Saturday Morning RPG goes so far that in manages to become kind of brilliant. It plays the tropes and ideas completely straight, but pushed so far that it can’t be anything else other than a joke. The characters do grow and develop, and you get a lot of nice emotional scenes here and there, but it’s all mixed in with the sheer, unending radical onslaught of 80s dorky kitsch, which gives the game a flavor that so few have. Not even the equally nostalgic Punch Club is quite like this, because it spread its aim too far. Saturday Morning RPG, for all intents and purposes, is the entirety of 1980s America as seen through the eyes of kids glued to the most righteous cartoon blocks.

This even steeps in through the music and presentation. Characters are rendered as sprites on 3D backgrounds, making the whole experience feel like you’re watching a child play with their toys in elaborate ways. How else would you justify the leader of a relatively realistic terrorist organization having He-Man villains on his side? It’s all glorious child logic at full blast. That’s also a good way to describe the music, which is just explosive and demands your attention. It’s surprisingly varied at times, making a very clear divide between exploring a town and battling a villain, but those battle themes sound like they were ripped right out of an old G.I. Joe episode at times. Considering they got the aforementioned Vince DiCola to do the music, that shouldn’t be too surprising. The writing is just as cheesy as a bad commercial cartoon too, with repeating speeches from our major villains and everyone fitting into rigid archetypes (though episode five makes a refreshing change with one character). It really gives the game a personality, one of bombast and simplicity, and absolute confidence in that simplicity. It’s here, it’s going to be as radical as possible, and you’re going to like it, darn it.

The gameplay itself didn’t even need to be good with all this pizzazz and joy, but the developers went out of their way to make the best Paper Mario game Nintendo didn’t make. The game’s battle system is based on input, as you can lessen damage you take by timing button presses with actual impact. Your basic punch also acts as a minigame where you have to hit a meter in the right spot for maximum damage. You also have a multiplier that mainly builds with proper guarding and by charging with a non-interactive but weak option, or two interactive versions based on gauges and rapid tapping. Where it gets crazy are the items you can bring with you into battle, which are all various trinkets with different magical abilities when used by Marty. Playing a game of “Garfunkel” gives a different enemy a different aliment with every successful sequence match. Using a joystick starts up a random power related to a classic arcade game, like Pong or Asteroids. One of the late game items is a game cartridge that causes you to grow a familiar mustache and hat, then jump on an enemy for every proper tap in a steady rhythm. Many of these items have static uses, while others are absolutely a game in and of themselves. Most are also very random, and can be fun to screw around with when doing sidequests.

This is where most of the game is. The world is covered in people, doozers, terrorists, Care Bears, intergalactic bounty hunters, and much more that need your help (usually by beating someone up or finding a thing by beating someone up). Just go up to them, press through dialog, get the quest and do it while you’re working on the main goal of the episode. That’s actually a bit more convoluted than it sounds, because the game has a very weird way of talking to characters. Just get near them, and a dialog box pops up. Unless you press the action button, dialog doesn’t continue. It is entirely possible to move through the game without realizing you can read more dialog for a good while. It’s a very strange decision. Some intractable stuff in the world also doesn’t really highlight properly, mainly three bones you have to find for a special battle back in the first episode, among other things. It’s a minor bug overall, though.

Otherwise, the game is very straightforward. The interesting thing is the episodic structure, which has every area designed in special ways, and every part of the game world changes with each episode based on what happened in the previous, including based on a few moral choices you can make. This allows every segment to have its own continuity and even layout, plus lets you replay past episodes whenever you want to try and get higher rankings, find things you didn’t before, and crush enemies that gave you trouble with the new tools you earned later on, not to mention improved stats.

This is where the game really gets inspired. See, experience to level up can be earned in battles, but encounters in an episode are limited, which encourages replay. But, exploration is also encouraged. You can get experience from not only sidequests and fights, but also just by exploring the area, which can also lead to finding new items and stickers. You can scratch stickers before every battle for one battle stat boosts or to inflict aliments, while your notebook can also get different covers for constant boosts. What you use in battle is often just as important as base stats, so leveling up and finding new items being met through a shared process encourages the player to engage more with the world and get invested. It’s a subtle touch that really adds a lot.

Saturday Morning RPG is very traditional and proud of its heritage, but it also tries to innovate where needed. It’s an overall short game, about ten hours if you really dig into quests, but it leaves quite the impression. We may also see more of it as the years go on, as episode five was an added episode released years later, and it definitely ends with room for sequels. Personality goes a long way sometimes, and that’s definitely the case here.