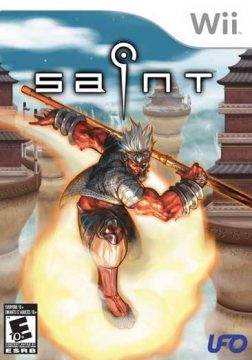 Daiseiou is the Japanese name of a Hong Kong comic book based on the The Monkey King legend. Since Starfish already had the basic engine in place, they probably figured it would be a brilliant idea to grab the license and make a more “mature” sequel to their previous game, where all the villains travel in giant air fortresses and space vehicles, and the hero’s cloud turns into a scantily-clad genie for the cutscenes. In the US the game was once again disenfranchised, and released as Saint. 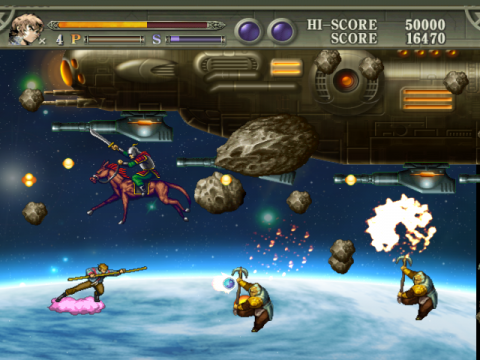 Each stage in Saint is split into three phases. The first each time is a horizontally scrolling shooting game which plays almost exactly the same as The Monkey King. The upgrade system works the same, and even the way special weapons are acquired in a room after shooting down a stronger enemy works identical. Most enemies even mirror looks and patterns from Starfish’s earlier game, but there are three major differences: First, there are two types of weapons Son Goku (the English version took over the Japanese pronounciation of names even though the comic originates in Hong Kong) can switch between by picking up the respective upgrades, with the knifes being stronger than the fireballs but limited by a more narrow shot. If either of the weapons is charged to maximum, the hero turns into an angry red monkey man for a limited time, whose only but big advantage is his ability to summon a huge staff that swivels across the screen and kills everything in its way. Finally, if the player doesn’t press the fire button for a few second, Son Goku automatically charges up for a slash with his staff, which is quite destructive and can deflect enemy bullets, but is mostly useless due to its short range and delayed execution. Especially the latter can easily get you killed if you end up triggering the attack unintentionally.

After this follows a Space Harrier style 3D level. These not only look terrible, but there is no sense of depth to the presentation, which makes it hard to even avoid enemies and almost impossible to intentionally hit anything, despite some weird aiming rectangle that’s entirely unhelpful. At the end of these segments, Son Goku always approaches the next flying fortress and he has to incapacitate it before he can get in close and challenge the boss. 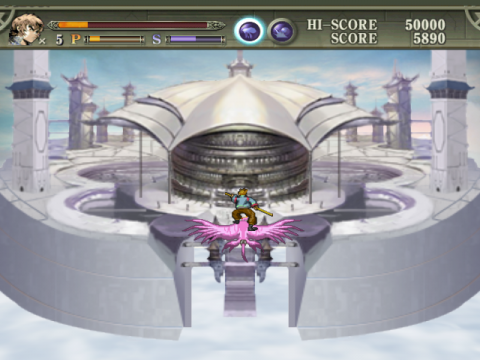 The boss fights take place in a strange little arena reminiscent of Defender or Fantasy Zone, as you can fly back and forth around it while the enemy approaches from one side. Unfortunately, there’s not much too the boss battles and the most effective tactic usually is to get a sub weapon that can be spammed like crazy and do exactly that.

Saint may be more versatile than Monkey King, but none of the parts really work, and especially the big sprites with unforgiving hit detection make it an exercise in frustration. It can be played by three players at once, but even alone the screen often becomes an unintelligible mess. On the Normal difficulty levels the bosses take a ridiculous amount of abuse, while on Easy everything is just mind-numbingly dull and meaningless. Who would have thought that a mediocre game plus license plus half-hearted genre shifts would not make a classic?