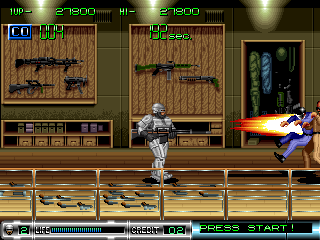 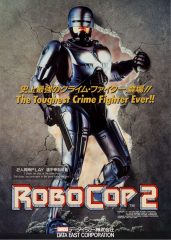 Ocean retained the RoboCop license for all of the subsequent console and computer versions, none of which were very good. Data East, however, was still able to create a sequel, solely for the arcades. It’s based on the second movie, of course, as RoboCop has to track down the evil Cain, a drug dealer whose brain has been implanted into a massive robot. 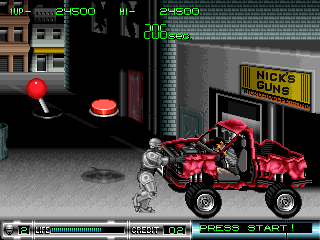 The game is a combination of a belt-scrolling beat-em-up and a run-and-gun. RoboCop is always equipped with a pistol, with two separate buttons for shooting right and left. He can also punch and body slam enemies if he gets close enough, and there are a handful of other weapons too, like bazookas. The stages are broken up with a few sections where RoboCop turns towards the background and fires at approaching bad guys. These segments are reminiscent of gallery shooters like Cabal. There are also a few bonus stages which take place in a first person perspective, as you ride a police cruiser down the highway and target enemies. 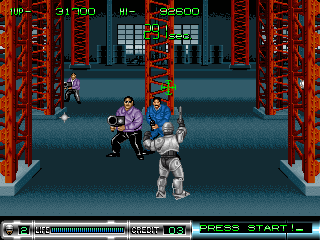 Most of the game is spent shooting random street punks, though one level takes place in a drug manufacturing plant, where the vile substance effectively turns the bad guys into zombies. There’s also another face-off with the ED-209 near the end of the game. Nearly the entire final level is spent in an epic battle with Cain, as you chase him through a building, onto the roof, piledrive him down back to the ground, and then finally destroy him on the city streets.

It’s a great setpiece, but it’s also the most tedious part of the game. Boss battles like this are frustrating, since you need to jump and hit a weak point to damage them, which makes you an easy target. It also takes forever since you need to beat him four times. Otherwise, it’s a pretty middle-of-the-road arcade game – fun but shallow.

As a side note, the movie RoboCop 2 has a scene where RoboCop fights in an arcade. All of the cabinets are Data East titles, including Sly Spy, Bad Dudes, Midnight Resistance, and Kung Fu Master, which is technically an Irem game, but was distributed by Data East in North America. 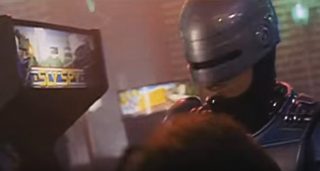