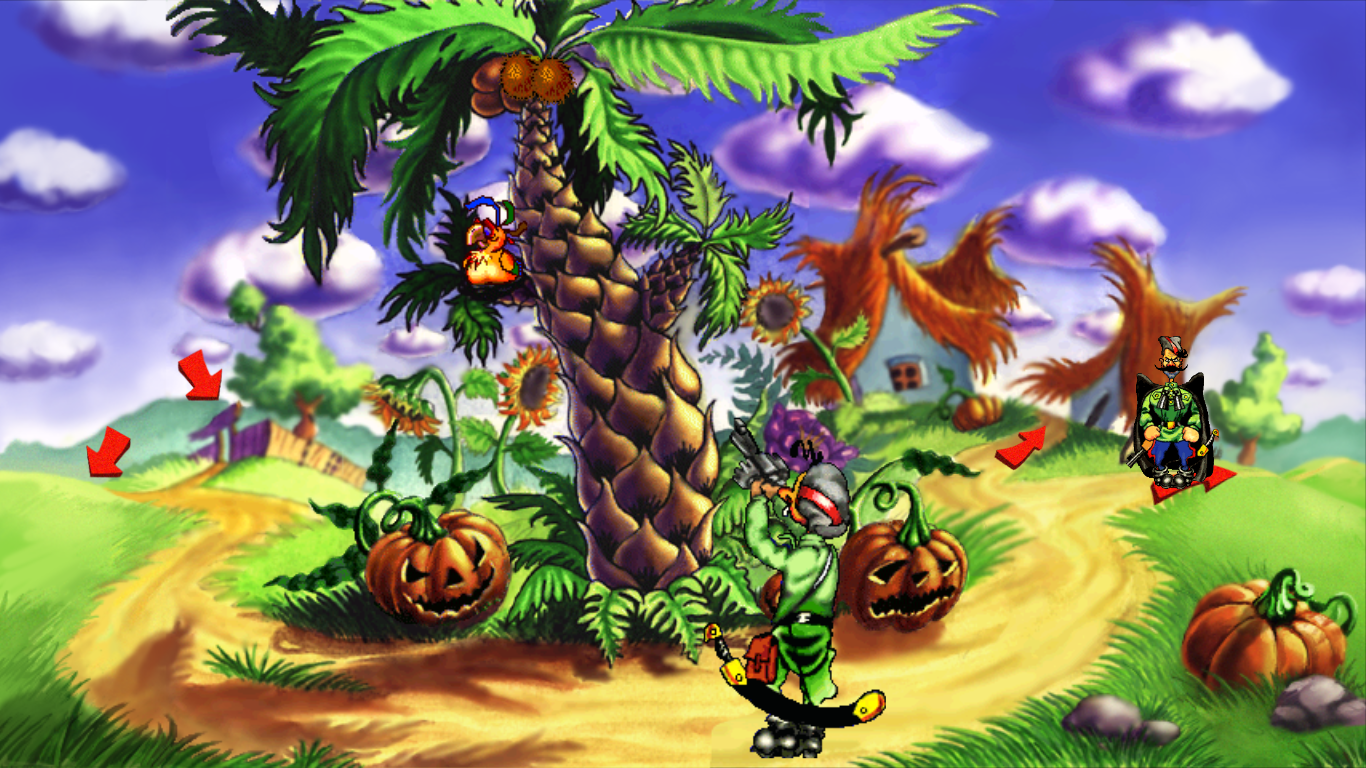 Russia has an interesting history with gaming, and as you’d expect, it’s kind of insane. Take Red Comrades Save The Galaxy, which was originally released in Russia in 1998 as Petka and Vasily Ivanovich Save the Galaxy, beginning a series of nine point-and-click adventure games. It was resurrected, ported and re-released for English speaking audiences for the first time in 2016. The game is about Communists from 1918 thwarting an alien invasion and includes a sequence where you complete a satanic ritual that ends with a ghost scaring a sadistic priest so bad he dies, and then his soul is dragged to Hell. This sequence is necessary to complete the game, but has nothing to do with the story at all. It’s as brutally Russian as one would hope, and it’s kind of amazing for it.

The game begins with a prologue stating that the moon is actually an alien craft used by a doomed race in hibernation, and a stray shell during a battle between the Reds and Whites ends up hitting the craft and waking up its habitats. With the guidance of their openly evil leader, the aliens decide they’re going to make Earth theirs, starting with an area of Russian they identify as “Backwoods.” Our heroes are Chapaev and Pete, two members of a small Communist army in the Backwoods, and Anka, a machine gunner and spy for Lenin gathering info across the border for the Reds by working undercover at a brothel. Chapaev and Pete try to go looking for their stolen banner, only to find themselves caught up in an alien conspiracy. Capitalism was one thing, but now beings from the stars!? 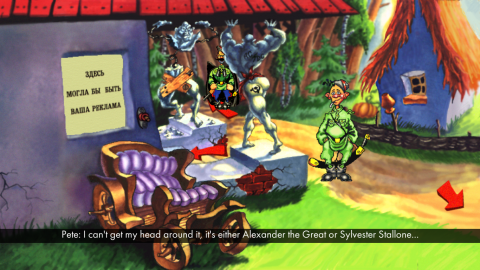 Red Comrades Save The Galaxy is as camp as it gets. The aliens dress in Bart Simpson attire, the world is littered with posters referencing Doom and Terminator, Anka is a sexual bombshell with a BDSM fetish, and of course, two Communist rubes end up stopping an alien invasion run by a lead alien that chooses to gloat about all his plans because he is fully aware that he is the bad guy. There is not a serious bone in the game’s body, and for the better. When puzzle solutions include inflating a blow-up doll and milking a cow so much that it dies and becomes a wearable hide, camp is what you want to go for. Best of all, it’s Russian camp, and there is no camp quite like Russian camp.

All the gags are either universal slapstick, or bizarrely Western pop culture or nerd references, like jokes about Sylvester Stallone. The developers are huge dorks with all the references and homage made, including a small scene where our heroes re-enact a famous scene from Pulp Fiction while escaping a Capitalist city. The exact same music plays. The new version lets you get achievements for examining and talking about movie posters. Yet it’s all portrayed in a very strange way, never quite fitting the situation and getting laughs through awkward execution.

The production itself is where the bizarre charm just oozes. Anka is rendered in a completely different art style than most of the cast, minor NPCs are given very limited and unrefined animations that look like they were made in ms-paint, and close up sprites used for single scenes are sometimes insanely detailed. Nothing quite fits together properly, and the game has mood whiplash at moments that give it a B-movie style charm. Anka doing a strip dance behind a curtain as stereotypical “chk-chk-cha” music plays and the cartoonish Pete watches? Why not? A room for BDSM that includes spikes around the doorway and a giant creepy picture of some old sadist staring down angrily at everyone in it? Do it! Nudie calendar that includes a stripped down Arnold Schwarzenegger? If it wasn’t there, the game would obviously be incomplete. There is rhyme and reason, but it never matches up with the rest of the game, creating something more akin to an 80s spoof movie than a classic point and click comedy. It’s just all filtered through the cultural context of Russian history and what the Russian developers saw and understood in these properties and ideas. It is just aggressively… weird. 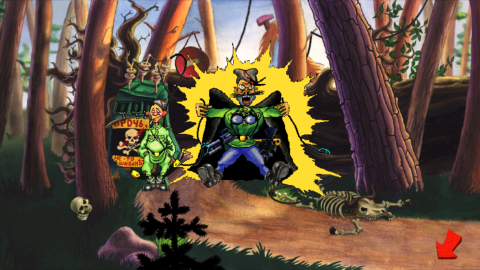 It’s on the shorter end of the point and click spectrum, and definitely something you should at least try. It’s a Russian game with a much lighter cultural barrier than most you’ll find, and it’s far better put together. There’s just something so fun in this mess of a game, even with the occasional bad gay or racist joke or the mountains of cheesecake in the Whites segment. It’s trash, but trash so aware of itself and so out there that it’s hard not to get some awkward laughs out of it. It’s also now easier to play than ever with the Reloaded version, which includes casual controls that greatly simplify the original old school-style mechanics. If you want something a bit different from a point and click, it doesn’t get more different than this.