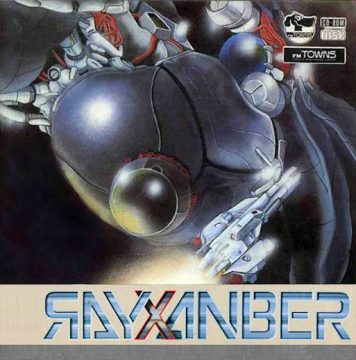 Not much is known about the Japanese developer known as DataWest (no connection to Data East). They apparently started around 1986 and continued until 1998, surviving mainly through visual novels for Japanese home computers and underdog consoles like the PC Engine CD-ROM. None of their games officially reached the west. They dabbled in other genres occasionally, including the unreleased PS1 game Bounty Arms,but their only real claims to fame are the Rayxanber trilogy of hori-shooters. Pronounced “Ray-zan-ber”, it appears to be derived from the kanji “raizankiba”, which means “Thunder Slash Fang”. They span an epic space trilogy heavily ripping-off R-Type, with Earth having to battle the bio-mechanical alien Zoul Empire for the first two games, before taking the fight to the Zoul homeworld in Rayxanber III. While the first two are not the greatest shooters available, they had some interesting ideas and the third more than makes up for them.

There are only really two noteworthy things about the original Rayxanber. Firstly, it started the series and presumably sold enough to warrant better sequels. The other is that it’s a system exclusive on a piece of hardware generally lacking exclusives. There were some good games for the FM Towns, but they were mostly ports. Back in the day you could only experience Rayxanber if you owned an FM Towns variant.

Looking over its back-catalogue DataWest often sided with the underdog, but it’s anyone’s guess why they chose the FM Towns over, for example, Sharp’s X68000. They’d already released games for the X68000 and there’s nothing about Rayxanber which necessitated the CD medium of the FM Towns. Presumably with so many other shooters available for the X68000 they thought it would fill a niche. The credits mysteriously attribute it to a “Team 50”, with just a director, programmer, musician and couple of graphics guys, in addition to two testers. 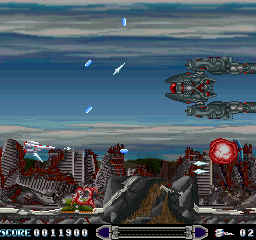 Graphically it’s lackluster, with some acceptable but uninteresting spritework and dull, static backgrounds. The music is all right, a jazzy easy listening blend which is melodic and melancholy, but not wildly exciting. Aesthetically it could almost pass for mediocre; mechanically, it’s awful. Your standard weapon is painfully weak, resulting in enemies acting like bullet sponges. The generic waves of enemies go down with one hit, but everything else is pretty much invincible to your pea-shooter.

The power-ups aren’t much better. They don’t stack, meaning you constantly feel underpowered. When collecting weapon orbs it’s also important to pay attention to the angle they’ve rotated, since this affects the direction the bullets fire from. Clever in theory but dreadful in practice since choosing any angle other than ahead tends to cripple you. Even when enemies are coming from behind, you are always better off keeping it firing ahead, otherwise after they’re gone you’re stuck like that! You can charge special weapons but the attacks they release are useless. The Blue Orb fires a couple of extra shots behind the craft, which is pointless when fighting enemies ahead of you. The Red Orb launches two homing flames, but until they connect to something you can’t fire again, leaving you crippled. The Green Orb temporarily creates a barrier which seemingly does nothing. 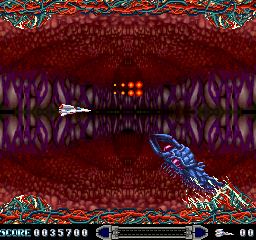 Your craft is also too slow, making one-hit deaths all too common. There’s a speed-boost button for dodging, but activating it launches the craft insanely fast in the given direction, more often than not making you hit something else. The checkpoint system is also ridiculous, rendering the game almost unplayable. This isn’t like most of the best shooters, where you can get good through tons and tons of practice. The fundamental system is flawed; it’s not even a fast game and there aren’t many enemies, it’s just sluggishly unfair.

Although a blatant R-Type rip-off, Rayxanber does have a few unusual ideas. At one point you come across something being dragged by two enemies, surrounded by an energy field. Kill them and it turns into a miniboss – unfortunately they all zoom by so fast that most players will probably miss it. The third stage, set inside some kind of organic body, culminates with a boss fight where you realize the background is actually a long set of teeth. Another level sticks with the horizontal format, but scrolls vertically as you descend through a planet’s atmosphere into its subterranean caverns. A later stage features an H.R. Giger art-style and a sliding block puzzle which plays out around your craft. There’s also a stage which grows around you, forming a maze of blocks. Admittedly several Gradius titles do something similar, but it’s neat to see. Unfortunately in almost all these examples the ideas have been poorly executed, resulting in punishing play mechanics which are more frustrating than fun; in Rayxanber you will repeatedly end up in unwinnable situations due to poor sign-posting and plain bad design. 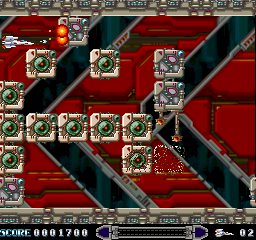 There is little redeemable about the original Rayxanber apart from the fact that if your only gaming system in 1990 was an FM Towns computer, there were only a couple of other shooters available to you. Otherwise it’s a fairly unremarkable game.