While Cabal received a modest cabal of fans (apologies for the pun), it also had a sequel with which not too many are as familiar. It was known as Blood Bros., and while not a direct sequel to Cabal in the strictest sense of the word, it may as well be Cabal 2 in all but atmosphere. Perhaps serving as an even more direct influence for Wild Guns than Cabal, Blood Bros.‘ biggest difference over its predecessor is its ol’ Western theme. It essentially does for Cabal what Lethal Enforcers II did to its predecessor, being an extremely similar follow-up and setting it in the latter half of nineteenth-century America. Why set it a century in the past while keeping the exact same gameplay? Who the heck knows why, but it’s filled with just as much destruction as its modern-day kin. 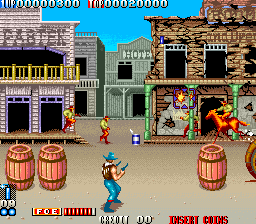 Once again, Blood Bros. foregoes story for action, though based on what you learn in the end credits, it’s apparent than an outlaw by the name of Big Bad John is searching for a gigantic treasure. The Blood Bros. hope to stop this nefarious goliath by blasting their way through anyone who stands in their path. Player one is a cowboy and player two is a Native American, giving more cosmetic difference between the two characters than just an altered uniform. Their journey takes them through waterfalls and train tracks, a big lake leading to a besieged town, a barfight, a big dry gulch, an oil field, an ominous cavern, and the treasure fortress where Big Bad John awaits them. There’s a lot more level variety than in Cabal with no two stages looking quite like each other, and they’re a great deal more colorful to boot. The graphics are much brighter and enticing, demonstrating the improvement two years can bring to what is essentially the same hardware. The sounds are also beefed up, with the main tune being a catchy Western-style ditty that’s certainly more prominent than Cabal‘s low-key tune, though it can get a bit repetitive considering the only other in-game tracks are the boss tunes.

Despite the fact that player one has dual pistols and player two uses a rifle, their default fire is exactly the same. As in Cabal, you control both your character and your target cursor when your finger isn’t held on the fire button, otherwise only the cursor moves. Grenades return in the form of dynamite sticks, and as before, you are granted ten per life with more to be earned from mass property and enemy damage. You get shotguns that increase your damage and giant machine guns which up your fire rate, and you can also roll around to evade fire. Just like Cabal, the heroes engage in a happy dance across the battlefield after each win. On top of this, the goofy factor has been raised significantly higher, with your most likely source of munitions of all things being pigs. If you shoot these cartoonish hogs that run across the screen, they’ll sprint quickly and drop weapons, with more to give if you can keep hitting them. Red ones give you dynamite, black ones drop shotguns, and pink ones dispense the heavy machine gun. There are even more silly targets like burlesque girls that give off points when shot, and squat Native American chieftans that always drop heavy machine guns. 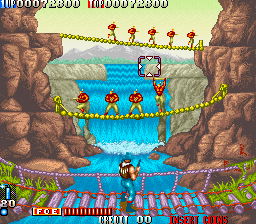 The enemies are even more vicious than in Cabal, with outlaws popping up in greater frequency than soldiers. Bomb-heaving convicts, armored wagons, armed blimps, old-timey planes, and horsemen chucking torches are among your adversaries. There are some enemies which only specifically appear in one stage in the entire game to break up the redundancy of normal enemies, like gunmen paddling kayaks, drunken shooters in barrels and what appear to be trios of Civil War Union soldiers. Blood Bros. ups the ante of potential property leveling over Cabal with not only buildings up for wreckage, but also cave walls, stalactites, and other natural edifices. You essentially have a two-man wrecking crew at your potential command, but don’t think too much about how a mere duo can obliterate an entire mountain with just guns and limited dynamite in stock. The bosses are even spicier and more enjoyable than in Cabal, like the titanic train which gradually drives into the foreground until it’s only inches away from you, a massive zeppelin which blasts at you with its many cannons, and a trio of giant birds who are somehow able to blast fire from their beaks. These fights tend to be harder than in Cabal, but thankfully you only have to restart them in single-player if you have to use a credit, not if you only lose a single life. While the action is overall more madcap and decidedly harder, the increased commonality of dynamite and new guns allows you to end levels faster, provided you can stay alive long enough. 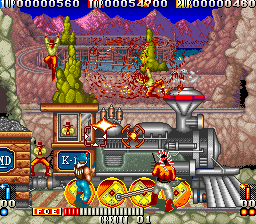 Blood Bros. is bolder, louder, and arguably cooler than Cabal. If not just for the brighter graphics and more varied settings, it serves as everything a sequel should be by upping the ante while keeping the spirit of the original intact. Lamentably, unlike its predecessor, Blood Bros. received absolutely no known ports outside of its initial arcade release, so MAME is the way to go in order to play it nowadays. It’s also unfortunate that, for such a neat duo of games, TAD Corporation didn’t last very long. Their only other contributions to the arcade scene are the action-platformer Toki (which received modest fame and even got several home ports), the obscure beat-em-up Legionnaire, and the also relatively unknown overhead shooter Heated Barrel. They folded in 1993, a fate too soon for a pretty darned cool company which kickstarted a specific sub-genre of shooters. The genre itself mostly died sometime in the mid-nineties, although Treasure’s cult classic Sin and Punishment may be considered the last great Cabal-style shooter. TAD’s contribution to the gaming world was not in vain, as there’s nothing quite like Cabal and/or Blood Bros.that captures the energetic essence of absolute destruction and demolition. 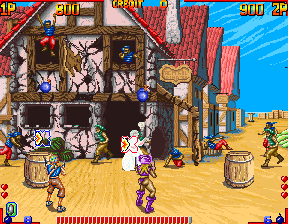 The Cabal-style shooter was a briefly popular genre in the nineties, so much to the degree that Cabal itself was completely ripped off by an unknown Spanish developer named Nix. To be fair, it was difficult to change the genre enough to not make any such game seem like a Cabal clone, but Nix went far enough so as to completely rip the style and atmosphere of Cabal and Blood Bros. to make Pirates. 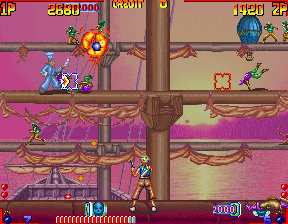 Perhaps better known as “PieAss” due to the slurred speech of the voice that chimes up whenever you enter a quarter, Pirates may as well be Cabal 3. It’s the exact same sort of game, though this time with a 17th-century pirates theme to everything. Its controls and power-ups are exactly the same, the players and enemies have similar animations, and you can even cause untold amounts of property damage to clock down your “enemy meter”. It does pull a few original things, like allowing you to pick your starting level and requiring you to target specific parts of the background in order to destroy it. Danged if it isn’t a weird game, though. How do pirates get access to automatic pistols in the sixteenth century anyway? And what’s with this flying witch that sounds like a goat who keeps popping up on screen to give you grenades? It’s strange, derivative, and its sound quality is chintzy, but for what it is, Pirates is good dumb fun just like its obvious inspirations. 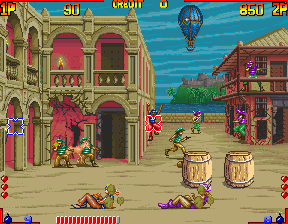 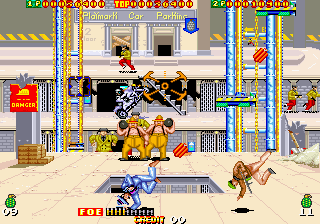 Cabal was the better-known of Tad’s two shooters, what with its numerous ports. Blood Bros., while arguably an even more fun game, somehow received no ports, but it did somehow receive an unofficial re-release called Hard Times thanks to an Italian company named Playmark. Its graphics were hacked wholesale while its gameplay remained the exact same, only instead of Old West cowboys shooting up outlaws, it was now made to cast the player characters as Prohibition-era gangsters waging a two-man war against other criminals. 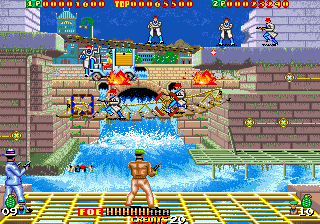 It’s an interesting new coat of paint, but it’s still Blood Bros., albeit the new setting is a bit more ridiculous. Stage 2-1 has pimp-coated thugs scaling high-rise walls as if they were Spider-Man, and the replacement for the bird boss is some sort of flight suit man who looks like a DC Comics reject. The level order is also changed around in an effort to not make it a 100% retread, though stage 5 only includes the final segment and ultimately cuts out the three levels before it. Hard Times is incredibly rare to find in the wild, as most of the cabinets were converted to instead Playmark’s puzzle game Hot Mind. Its emulation is botched on MAME with the sound missing and a few sprites (most notably the level 2 boss) becoming severely glitched. Being that it’s missing a few levels anyway, Hard Times is a slightly inferior product to Blood Bros. and is mostly worth playing only on the basis of curiosity. 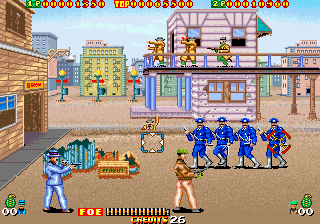