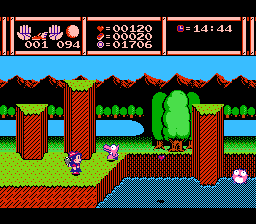 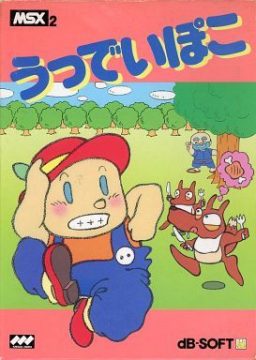 Poco is a wooden boy (or girl, depending on the game version) who was magically given life. Unfortunately, something has happened in the land which has caused them to revert to their original doll form. Wishing once again to be truly alive, they set off an adventure through the kingdom to regain their humanity. 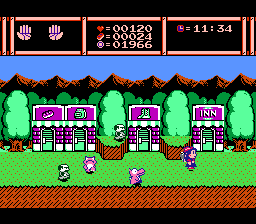 Woody Poco is a side-scrolling action game with RPG elements, roughly equivalent to something like Legacy of the Wizard or Castlevania II. However, while there are enemies to face off against, the main goal is actually around item gathering and resource management. Right from the beginning, there are several different houses, which include shops that sell bread, shoes, and lamps, as well as hotels where you can rest, and houses where you can get hints. Gold is hard to come by, so you need to discover various methods of scrounging up cash. You have limited inventory space, so much of the game revolves around figuring out what kind of items to take with you and how best to use them. These include shoes, to increase your speed, lamps to light your way in caves, and food to keep your health up. It has a unique way of using items, where things in your left hand are used for combat, while things in your right are used passively. This has some interesting effects – for example, croissants are automatically consumed as food as needed if you stick them in your left hand, but can be used as boomerang-like throwing weapons if equipped on the right.

Figuring out which items do what can be frustrating, but this is mitigated thanks to the cutesy game world and plenty of strange touches. The wolf enemies, for example, are just adorable. You can steal items from almost any shop, but then you’re branded a thief and given a mask as mark of shame – you are then no longer allowed back into most stores until you accomplish a trial. Certain equippable items stack, so you can buy a dozen pairs of shoes and then zoom around like a superhero. The PC versions came with a cutesy “Poco Adventure diary” as well as a manual that looks like a coloring book. 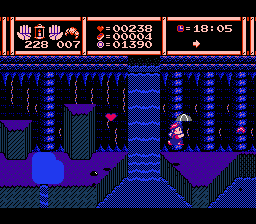 Woody Poco was developed by dB-Soft, who put out a few lesser known titles like the puzzle game Flappy and the Dirty Pair rip-off action game Layla. The hero became sort of a mascot for the company and made several cameo appearances in later titles. Beyond its initial releases for Japanese PCs, it saw a port to the Famicom (screenshots pictured here) which included a number of changes for the different audience, including altered level layouts, faster movements, and the ability to jump.