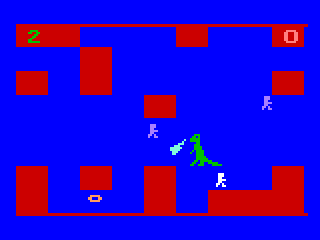 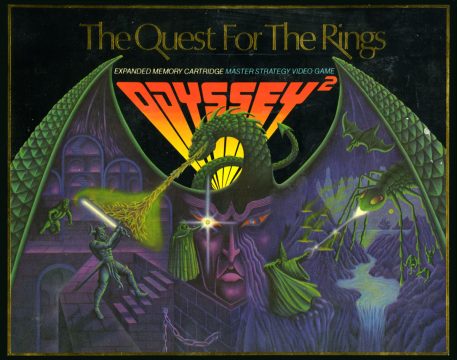 The Quest for the Rings is a different video game indeed, at least from what we’re used to. Instead of picking up a controller and playing it like any other game, this boxed set came complete with a game board as well as a map and tokens. Strange as this may seem, this was not an entirely new idea. In the early 70s there was a board game titled Monday Night Football that you played while watching the television program Monday Night Football (obvious title right?), which is the early example of a combination of TV and board games even though it was not a video game proper. After The Quest for the Rings, Phillips made two other games like this titled The Great Wall Street Fortune Hunt and Conquest of the World, who also featured a game board and other assorted game tokens. These games were a part of Phillips’ short lived Master Strategy series that just never took off.

The Quest for the Rings came in a huge box with a glossy instruction book whose presentation rivaled many Dungeons & Dragons books. It was in full color like many manuals at the time, but it came with character bios, a bestiary, oversized manual, full page art for all the levels in the game, a full sized game board, keyboard overlay, and a bunch of tokens. Clearly this game had high production values at least for the manual and box design, but how does the game hold up to its cousin Dungeons & Dragons? Except for the warrior and the wizard, the character classes are rather unconventional. Unfortunately the wizard sucks. The two unique characters are the Phantom and the Changeling. There are no stat sheets, so also no leveling up except when you collect a ring which just increases your speed. All playable characters have their own unique traits, but only two are given back stories. 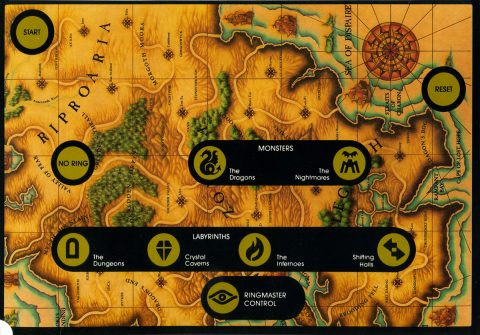 The Warrior
The Warrior is a legendary hero of the Troll Wars who carries Theor’s sword (who this is the manual doesn’t explain) that is strong against men and demons. He is also the heir to the Kingdom of the 7 Countries which much be a huge kingdom. Finally he is descended from Roxell and Willowan who were apparently the 12th captain of the knights of the 7 Countries. This guy has the grandest backstory, but actually he sucks in combat. However, he is surprisingly still the best character as he is the only one that can kill certain enemies.

The Wizard
He has no back-story at all. Being a wizard he casts spells, but not the usual destructive kind. He casts stun. That’s his only spell.

The Phantom
The instruction book says he’s a spectral nightshade which is apparently a fancy name for a phantom. His only back-story is that he wants all the rings of power so he can rest in peace. His most useful character ability makes him walk through walls. Unfortunately this guy is just as slow as all the others and lacks combat abilities, making him only useful in combination with the warrior.

The Changeling
He possesses the Mirror Cloak that grants him invisibility for a time. He has no back-story to speak of. Some enemies still seem to find him even with the cloak of invisibility activated, especially the dragon, so this guy is worthless. 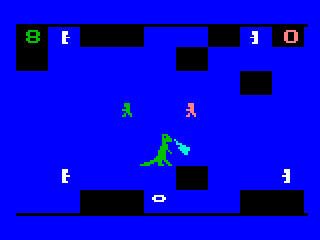 The background story, as you might have guessed, is massive. Apparently a volcano has erupted and produces the Rings of Power that everyone wants, in addition to the Ringspawn. The eruption is so massive that it sends all the fury that is hidden in the rings flying throughout the world and the volcano is encased in a protective covering of lava. There the Ringspawn has a nightmare about the rings around the world losing their power or something like that. It’s all very convoluted and confusing. Monsters appear for some reason to gather the rings so the Ringspawn can awaken, which he eventually does. Then the story fades to current day where you and your band of bumbling heroes set out to collect the rings. You and a friend play as two out of four light warrior, as they set out to collect the rings. Which begs the question what happens when all the rings are collected? Since the book never tells, you probably aren’t supposed to think about it.

The Quest for the Rings is a two- to five-player game. The two-player version is vastly different from the rest, as it doesn’t use the game board or tokens at all. Here you just select your heroes and do battle against some of the most frustrating enemies ever in order to get the ring which always appears in a two player game. Firewraths and orcs can be killed only by the warrior. The dragon, Spydroth Tyrantulus (spider), and Doomwinged Bloodthirsts (bat things) cannot be killed. They can only be sent backward except for the dragon. You cannot attack from above or below. Since the place is crawling with enemies, this makes for a very frustrating game. The invincible enemies always gather around the ring, so getting it requires blind luck most of the time. If there is a dragon on the screen, you can kiss your chances of getting it good bye, because he is super fast and can breathe fire from almost halfway across the screen. He is also way faster than the heroes. The game ends when you collect ten rings. 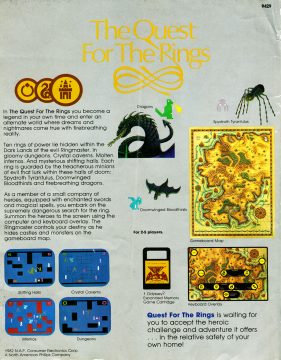 The three player version works like a tabletop role-playing game, except for the fact you can’t set up quests. One player plays as the Dungeon Master a.k.a. Ringmaster, and the other two players are the heroes. The Ringmaster places tokens on the board that represent dungeons, ring locations, and monsters such as the dragon. The game runs on 50, 75, or 100 turns. Each turn passes when you go to a place on the map. Turns are monitored by an hourglass token that moves on the game board. So generally you decide which location to go to and fight monsters and collect rings while playing on the board and on the screen in parallel. Of course the Ringmaster has some input by possessing a hero, if he has a possession token. In order to exorcise a hero he has to be killed by the other player in combat. The game once again ends when the heroes collect ten rings. The four and five player games work the same except that all players save for the Ringmaster alternate between turns.

There are four possible dungeons that you can go to, which all offer different playing fields. In the Crystal Caverns walls are invisible. In the Shifting Halls the walls move around, making life very difficult as you can get trapped inside a wall and are then easily killed by an enemy. The Infernoes makes the walls lethal like in the much better title Berzerk. The boringly-named “Dungeons” takes place in a castle and offers no obstacles other than enemies.

Quest for the Rings sure tries to be different, but the end result is a game that is too frustrating to play. While the heroes have different abilities that help them work together, the enemies just end up being too difficult to kill or avoid. This game also was very expensive at the time of its release, with an asking price of $50 as opposed to the $15 to $20 games that were around. It’s an interesting novelty, but not a good game by any means. If you want a tabletop RPG experience, you’re far better off playing the real deal, as the video game component doesn’t add much to it, anyway.