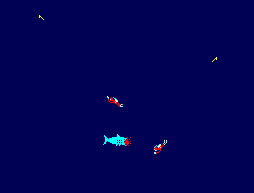 Back in the early ’80s, digitized speech was a pretty snazzy thing. That is, if you could understand it. You had Evil Otto telling you to “fight like a robot”, or the Wizard of Wor‘s haunting “KA KA KA KA KA”. Thing was, though, that was all computer generated speech, and it showed. Some people would think that Sinistar might have been the first game where a real human being using his voice to taunt you. The truth, as it turns out, is a lot sillier. Shark Attack was released by the obscure arcade outfit Pacific Novelty, which was founded by Bernie Stolar, who later became president of Sega of America, amongst other roles. It’s one of the three arcade games developed by them that used a cassette tape to play back real speech from real humans. The game, sadly, hasn’t aged all that well. Neither has the speech, but it’s a whole lot funnier. 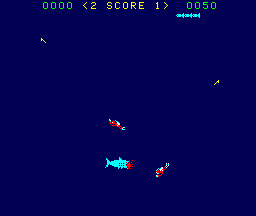 In Shark Attack, you control a shark, searching the vast oceans for hordes of unsuspecting humans to chomp on. Through the use of the joystick, you control the shark, and by holding down the “Thrust” button, you can give yourself a speed boost to escape death. The “Munch” button, on the other hand, does exactly what it sounds like. You can also hold down the Munch button down for a few seconds for automatic chomping power, which can help you with getting the quicker… er, targets. The game also has support for two players, but seeing as this is 1981, your particularly sadistic friend will have to wait his or her turn until your current reign of terror ends before they begin theirs. 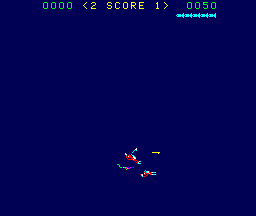 Your goal is to eat as many divers as you can before you run out of lives. With each wave, four divers appear at the center of the screen before spreading out, swimming around and shooting their spearguns at random. Getting hit with a spear will cause your shark to disintegrate like he just went through a Star Trek teleporter, along with the loss of a life. By pressing the Munch button while you’re near a diver, however, your shark will chomp them into a bloody mess, earning you some extra points. Well, by “bloody mess”, it’s more like a “two frame animation of a puff of red”, but the principle is still there. Sure, Shark Attack wasn’t the only arcade game that dealt with the concept of you killing actual humanoids, (see Death Race in 1976) but it’s still surprisingly brutal for how low tech it all is.

When you kill all four divers in a wave, you get a skull, and four more appear. Each wave of divers is slightly faster and slightly better at chasing you at the last, so holding onto your lives gets more difficult as you go on. Each successive wave of divers are also worth more points for chomping, as a trade off. Once you get seven skulls, you earn an extra shark, and you start again at the first wave of divers. And so, that’s how it goes. An endless army of divers, thrown at a bloodthirsty, uncaring shark, doomed to die under the weight of sheer numbers. It’s a sad life, the life of an early ’80s arcade game protagonist. How do you think the base from Space Invaders felt?

The graphics, understandably, aren’t going to be anything particularly amazing. The divers are probably the best part of the whole production, since they have frames for each of the eight directions they swim in. And as mentioned before, the blood, while simple, still adds a nice touch to things. The shark itself, however, only has about four frames of animation total, not counting its weird death animation. The background itself is a simple shade of dark blue, and the font, while serviceable, is so blocky you could count the pixels in it. 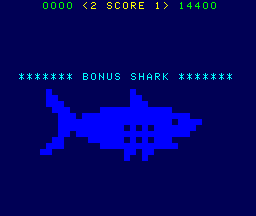 And the sound? Well, that’s where things get interesting. For the most part, it’s a series of two tones that get faster and faster as gameplay continues. If you factor in the cassette tapes built into the cabinet (replicated by the “samples” files you can find and download for MAME), Shark Attack becomes less of a horror movie and more of a comedy. The cassette tapes are quite possibly the one thing saving this game from total obscurity, and deservedly so.

As you play the game, you’ll hear four people talking, three male, and one female. We can only assume they’re employees of Pacific Novelty, although we’ve sadly lost the names of the first video game voice actors. The tape itself lasts 45 seconds, and consists of random snippets of speech from these people. There also seems to be a separate tape of these people screaming whenever you chomp a diver, and these employees, to their credit, tried their damndest to act like they were being eaten by a shark. It’s a little shocking hearing just how into it they get when you chomp your first diver. Other than that, however, the voices on the ‘main’ tape never really sync up with what’s going on in the game itself.

Apparently, absolutely none of the divers have any clue what they’re doing, going by the dialogue. They keep badgering each other if they have their cameras out, or yelling at each other to get out of the way, or that the water’s cold. Most of the dialogue about the shark itself involves the divers saying things like “He’s comin’ towards ya!”, “Mean lookin’ fish!” or “He must be 40 feet long!”. The divers themselves seem to be a little confused on if they’re trying to kill this shark or take pictures of it, given how often they seem to forget you’re eating them all alive. Probably the best line of all would have to be the dumbass who keeps asking “What do sharks eat?” This is probably after you’ve demonstrated several dozen times EXACTLY just what sharks eat. Still, it’s a nice touch to what would probably be a pretty forgettable arcade game, overall.

Other than that, though, it’s pretty much an almost completely forgettable arcade game. It doesn’t have the playability of Pac-Man, or the uniqueness of something like Asteroids. It never received any official ports, either. Pacific Novelty would go on to make two other games using the same cassette tape technology, along with a few other arcade games, before dying quietly. It’s not a huge loss, but this game is a definite curiosity, especially if you’re interested in seeing the history of video game voice acting.