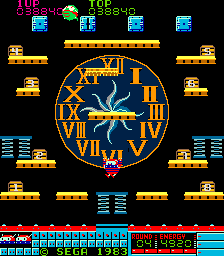 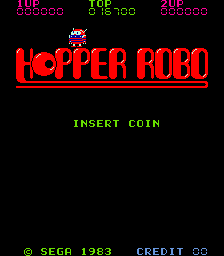 Whenever a new game concept hit it big during the infant days of video games in the late 70s and early 80s, people never had to wait long for dozens of cash-in titles to pop up, and Nintendo’s Donkey Kong was no exception. For about two years following on its release, the platformer genre – laudable exceptions like Activision’s Pitfall notwithstanding – was pretty much defined by single screen setups of ladders and girders (or similar structures) be it arcade games like Ponpoko, Woodpecker, Kangaroo, Mouser and Nintendo’s own Popeye, or home variants like Fast Eddie, Spy Panic and Jump Man.

Hopper Robo also belongs into this category of Donkey Kong-likes, and Sega doesn’t seem to have ever been very proud of its existence – the game never appeared on any compilations, no flyers or other advertisement is known. This might have to do with the game not being actually programmed by Sega itself: Even though nothing in the game would hint towards it, Hopper Robo is attributed to a company named Orca, who put out a number of uninspired clones (including an exact carbon copy of Donkey Kong) and some few unique games from around 1981-1983, before quietly disappearing from the scene. For some reason, they ended up ghost-developing Hopper Robo for Sega.

Hopper Robo is no useless clone, though, but actually has enough unique elements to make it worth checking out. Some of its quirks resemble pinball machines; there are springboards for the robot to reach higher platforms, and pipes he can use to stealthily slide back down – long before Super Mario discovered these installations as a means of transportation (in Mario Bros. it was only the enemies and coins who’d pop out of them). Clock tower stages with cogwheels and rotating platforms on the other hand now seem like an odd foreshadowing for the Castlevania series.

The goal in each stage is simple and matches most other genre examples of the era: Collect all eight treasure chests while avoiding a horde of enemies that jumps out of a row of metal doors at the top of the screen. Those can be taken out by jumping on their heads – another move Mario only learned much later – but respawn indefinitely. The robot’s coolest move, however, is his ability to grab onto any steel girder and shimmy along before deciding to climb up or drop down, making the chubby-looking machine possibly the most agile platformer hero of its time, although his ways to react to the laws of physics seem a bit weird at times, especially when using the springboards.

Unfortunately, Hopper Robo was made just before arcade platformers started to get really rich in content, and loops back after no more than eight stages – compare that to Sega’s Flicky, which boasted almost 50 stages less than a year later. It wouldn’t have been too hard to add at least some variation – like changing the order of the chests, which can be used to boost up the score significantly – but there’s nothing like that. Looking back at it now, the game feels like a mere demo for an interesting concept rather than a full game, although that of course is an anachronistic point of view. The enemies get really mean in the latter stages, though, and extra lives are sparse, so it still takes a while to master the game.