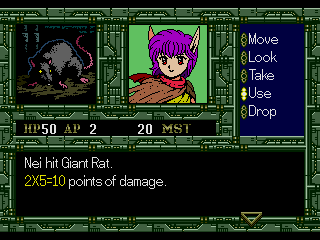 Between 1990 and 1992, Sega produced 10 spin-offs of its flagship RPG series, Phantasy Star. While the number is imposing, all were small, low-key releases, created at least in part to support some of the company’s secondary platforms.

The first eight belong to a sub-series commonly known as the Phantasy Star II Text Adventures. Sega’s initial plans for the Mega Drive included an online service, the MegaNet, that would allow players to download games and play them with or against each other at a distance, in addition to providing non-gaming adults various business-related functions such as online banking and stock management. While these ambitions proved to be more than the day’s technology and consumer-base could support, Sega kept this service running for a little over a year in Japan, and would try something similar with the Sega Channel a few years down the line. Between 1990 and 1991, roughly 30 games were made available for download through the service’s Game Toshokan (Game Library). 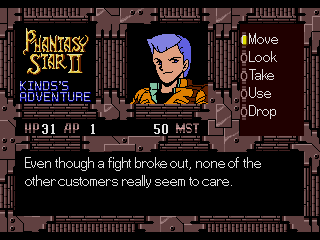 Because of the slow download speed and the small amount of space available on the rewritable cartridge that came with the MegaNet modem, the games had to be significantly smaller than typical Mega Drive releases. A few were ports of much older arcade titles; most were original titles revolving around simple mechanics. Single-screen platformers were especially common, and so were puzzlers, along with basic sports games or poker and blackjack sims.

Somewhere along the way, someone had an interesting idea.

Japanese-style graphic adventure games like Snatcher or Policenauts had been around since the early ’80s, and were particularly common on computers and Nintendo’s Famicom Disk System, whose choice of medium allowed for larger games than other home systems. By reducing the visuals to a strict minimum and concentrating on the text, however, it’d be possible to offer a relatively in-depth experience without taking up too much space. Ignoring the poorly-received Phantasy Star III, released earlier the same year, those games would instead focus on the backstories of each of the eight playable characters of its more popular prequel, Phantasy Star II. 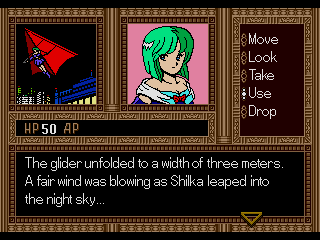 It isn’t known who, exactly, made these games, as only a few of the writers are credited. According to an interview published on Sega’s Japanese site in later years, Phantasy Star director Kotaro Hayashida was involved, as was PSII character designer Toru Yoshida. At least three of the games were written by either Kohei Nomura or Kenji Orimo, who’d go on to work on classics like Landstalkers, Shining Force or Alundra at Climax and later Matrix Software. Two more seem to have been authored by a pair of Japanese Choose Your Own Adventure-style book writers.

The mechanics are the same for all eight games. The interface features a menu to the top right of the screen, with options such a Look, Take and Use allowing you to interact with your surroundings. Next to it is a portrait of the character, which will sometimes change in the course of the story, and further left, a logo showing the game’s title. The bottom is reserved for the text box. The game plays out like a more interactive visual novel; text describes your current location in details, with things of interest highlighted in Yellow. You find or receive items to be used to resolve (mostly) simple puzzles, talk to people for clues or to advance the story, and even fight a few monsters in predetermined spots. When moving between different areas, a small sprite of your character appears in the middle of the screen, in between arrows depicting the directions available to travel in. 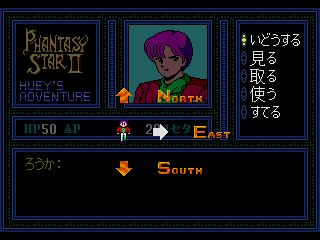 The battles are turn-based, but differ from typical RPG battle systems in that they use dice to determine damage. The weapon you’re currently using determines the number of dice you throw and the Attack Power by which their sum is multiplied. Sometimes, you’ll have access to healing items or, in one specific case, a special technique, but for the most part these battles are purely up to chance, though they are typically reasonable enough that this isn’t a real problem. If you find yourself losing repeatedly, chances are you’ve missed the latest weapon, or you’re not actually supposed to fight that enemy.

Though they aren’t necessarily a lot of fun, the fights are few and far between, and help give the games a bit of a RPG feel. They’re also among the few occasions you’ll have of looking at something other than text, as the logo makes way for monster illustrations during those encounters.

Each adventure has its own main theme that plays throughout, with a few extra tracks for battles and special situations. They’re generally simpler than what you’d hear in a full cartridge release, but some of them work pretty well at setting an ambiance. 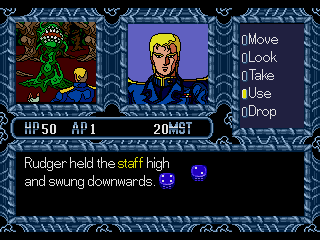 The balance between story, puzzle and fighting varies from one adventure to the next, usually in accordance with the protagonist’s personality and situation. They are:

Raised in an orphanage since the death of his parents, 11-year old Eusis has earned a reputation throughout Paseo as a child prodigy, particularly with the sword. Hearing of a sword master’s recent appearance at the local gym, he sneaks out to challenge him one night, only to be soundly beaten. Shocked by this first defeat, he departs for an uninhabited island, vowing not to return until his training his done. Upon landing in Paseo again after 8 long years, he learns that his childhood crush has been abducted. He rushes to her rescue, but things may not be what they seem… Out of the 8 adventures, Eusis’ is the shortest and most straightforward, concentrating on storytelling at the expense of puzzles and exploration. It’s also the only one to feature a special technique, dealing a ton of damage at the cost of some of your own health.

Ever since the brutal murder of her adoptive parents 6 months before, Nei has been condemned to a life of wandering, shunned by all for her strange appearance. In Paseo, a series of chance meetings will lead her to the truth of her origins, provide her with a chance to avenge her parents, and ultimately turn her life around… Nei is very much a tragic character, and the tone of her adventure reflects this throughout. Within the first few minutes, she is shot in the back with tranquilizers and left for dead at the city dump, then forced to fight off a rabid dog as she awakens amid the garbage. It’s also the most relevant to Phantasy Star II’s story, leading directly to her meeting with Eusis shortly before it starts. Unfortunately, it’s easy to get stuck, as you are left to wander around with no clear objective for much of the game.

A student researcher at Motavia University, Huey has been experimenting with genetics, attempting to create new breeds of flowers. One morning, the Director calls him to his office. There have been reports of strange disturbances on campus, and he wants Huey to investigate the matter. Before long, he finds himself chasing a rapidly-evolving plant monster around the university grounds… Huey’s story has a number of things in common with Hahn’s in Phantasy Star IV, and is generally one of the better adventures, with a nice balance of puzzle, battles and plot.

On a day’s leave from his military base, soldier Rudger Steiner is heading for his hometown of Mahal when he sees clouds of smoke rising from its direction. There, he finds the bodies of his wife and son and swears to track down the biomonster responsible… Probably the worst out of the 8, Rudger’s story has both the simplest narrative and most complicated design; the area explored is relatively large and confusing, there’s substantial backtracking, the solution to the puzzles are more preposterous than usual, and worst of all, it gives you entirely too many important items to pick up long before you’ll need them, so that by the middle you’ll find yourself forced to drop them all over the place only to have to retrieve them later. Oddly, Rudger’s Adventure doesn’t show a sprite when choosing directions but a smaller portrait instead.

A promising young Hunter, Amia is sent off to a remote area to find and arrest the leader of a group of Motavians who’ve been hacking into Mother Brain and stealing from the local dome farm, where all the region’s food is produced. Most of the adventure consists of following his trail and repeatedly getting knocked unconscious whenever you get too close.

Fresh out of internship, young doctor Anne is tasked with bringing medicine to the children of nearby Wood Town Elementary School following a biomonster attack. With the help of a hermit named Heinz, she will track down and confront the monster responsible while helping injured people along the way. Anne’s role in PSII is primarily that of a healer, and her adventure puts her in a similar role. While she does fight a few smaller monsters on her own, in the final battle she gets healing duties while Heinz does the fighting.

Having run away from home at 14, 18-year-old Kinds lives on his own in the sketchy city of Lume, earning Meseta here and there fixing AC systems or slot machines, or trying to. While trying to put together an illegal Psy-Gun for his own amusement, he gets caught up in a youth gang’s plans to destroy Mother Brain. Written in the first-person, Kinds’s story stands out from the rest thanks to a grittier cyberpunk ambiance. Where most of the other characters travel through unfamiliar lands, facing monsters and other typical threats, Kinds mostly just hangs around the neighborhood and gets into trouble, from a knife fight in a local bar to running from police robots.

The spoiled daughter of one of Paseo’s richest families, Shilka has taken to stealing for the thrill of it, growing more sophisticated with each heist. She finally turns her sights on a famous painting held at an art gallery in the famous Kaiser Building. As the rich and famous gather to celebrate the building’s 5th Anniversary, Shilka hatches a plan to get inside from a neighboring hotel and make it past the security systems… Shilka’s Adventure’s theme of stealth and deception lands itself to a cleverly constructed little game with an emphasis on inventory-based puzzles, even throwing a red herring and an instant death or two in the mix. It’s also notable for being the only one in the series to feature a handful of illustrations depicting actions and locations rather than just character portraits and monsters. 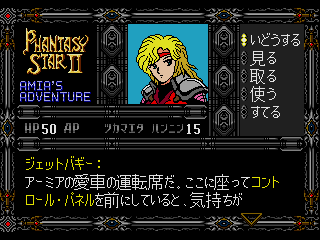 With that many different writers on board, the quality of the writing can be uneven from one game to the next, especially since those who do receive credit weren’t involved with PSII, which explains why some of the adventures don’t feel in step with the mainline games. Though certainly not for everybody, most are nice, bite-sized experiences for gamers who like reading or readers who like to game, while giving Phantasy Star fans a chance to explore small corners of its universe from a more detailed perspective. 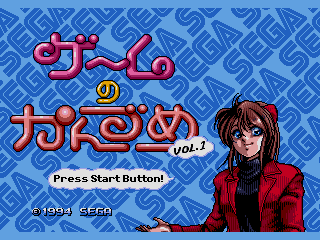 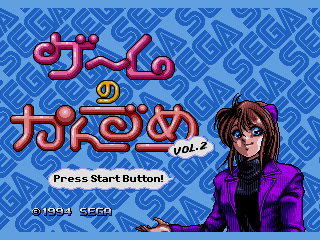 In 1994, Sega collected a number of MegaNet games on two compilation discs for the Mega CD in Japan, with the Phantasy Star II Text Adventures divided evenly between them. These ports feature slight revisions to the text, along with other minor touch-ups, and replace the original title screen music with a CD-based version that sounds considerably better, though the rest of the music remains the same. Both the original MegaNet adventures and their Mega CD versions have been fan-translated, thanks to the ever-thorough M.I.J.E.T. The adventures were also included in the Phantasy Star Complete Collection released in Japan for the PS2.