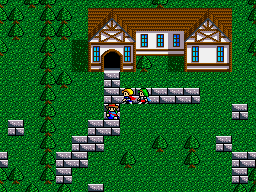 While the previous Phantasy Star spin-offs were adventure games with some RPG characteristics, Gaiden is a full-fledged RPG. Unfortunately, it’s a very bad one.

Taking place on a planet named Copto, one light-year away from the Algo star system, it tells the story of two youths, Alec and Mina, who set out to rescue Alec’s father from a group of bandits known as the Daedelus. Copto is home to the Alisaland colony, named after Phantasy Star‘s heroine, Alis Landale (Alisa in Japan), who discovered it sometimes after the first game. There, according to this game, she fought the demon Cablon, and predictably sealed him away rather than destroying him; as the game begins, he is, of course, about to be resurrected after 400 years of slumber. 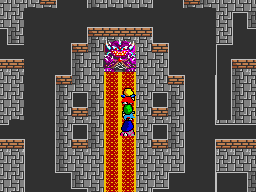 Very little happens past that point. Despite being released in 1992, Gaiden is in many ways closer to the very first wave of Japanese console RPGs; if one could just go through it without worrying about levels and equipment, the whole thing wouldn’t last two hours. There are four or five short story scenes in the entire game, with the rest of the dialogue consisting of townies giving hints or thanking you for your general heroism. Likewise, there are few dungeons, most of them very small, and they’re mostly all packed together in the final section. For most of the game, all you really do is walk around the overworld, fighting monsters for experience and money.

Progressing through PS Gaiden requires more grinding than in literally any other RPG released in the ’90s, and there is no shortcut through it; stats in general remain very low, so that monsters above your level are impossible to even damage. Even attack spells are no help, as they are not much more powerful than your regular attacks. 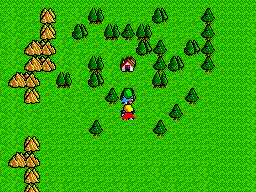 The encounter rate, too, is either the all-time highest, or a very serious candidate; it isn’t rare to get into a fight one single step after the last, sometimes several times in a row. Going three steps without one is a relief; five steps is a miracle. At the very least, battles go by quite fast, especially if you remember to turn up the text speed to the highest level. There’s little to them but attacking. You rarely even have to heal, as your party members always attacks first, often dealing with the monsters before they get a chance to get a hit in, and there are only 3 boss battles.

You can run from almost every encounter in the game on your first try. This is worth knowing because some fights are useless in terms of EXP. and Meseta, and also because the final boss is such a weakling that he can easily be defeated even if you can’t beat the monsters in his castle.

All magic spells must be purchased, and there is no way to tell what they’ll do until you try them out; as a general rule, those that incapacitate your foes are the only ones worth using, as they almost always work. The first healing spell you can buy is almost comically useless: it heals 5 HP a dose, when even in the beginning your characters have around 40 or 50. Late in the game, you gain access to a spell that ends random encounters completely, but only until you enter a town or get to another dungeon floor. It feels great, but it costs so much MP that you can only really cast it once per outing. The spell that lets you escape dungeons is also worth getting, if only to save you some time. 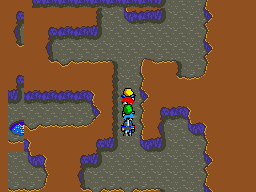 Though up to the three characters can be in your party at a time, Alec and Mina remain alone for most of the game. Then, within an hour or two of play time late in the game, you’ll rotate between three third members, each replacing the previous one permanently. Dirk is a forest gnome who got lost in the Lost Forest where he lives; you need him to close a sluice gate. Lars is an android who stays with you for about 10 minutes, then turns into a boat. The third, spoiler alert, is Alis herself, fresh out of cryogenic sleep, who remains with you until the end of the game. She looks nothing like before – apparently she decided to dye her hair purple and get a new face – and her role in the story is strictly fan-fiction level.

There is very little else to tie Gaiden to the main series, with only the faintest traces of science-fiction in sight. While Phantasy Star III also felt removed from its two prequels, it at least showed plenty of ambition; Gaiden only aspires to be a completely generic fantasy RPG, and fails even at that.

So how did Sega get so many things wrong? Well, their mistake was to hand down the development to an obscure company called Japan Supply Systems, who, as far as we know, had never made a RPG before. Sub-contracting was a common occurrence on the Game Gear, as Sega’s internal studios were generally focused on making arcade and Genesis games; it’s just a shame that they didn’t go with a more qualified developer.

The graphics, at least, are relatively decent, with serviceable town graphics and pretty nice illustrations during the rare cutscenes. NPCs portraits, on the other hand, can get pretty goofy.

Like the other Phantasy Star side-projects, Gaiden was never released outside of Japan, but did get a fan translation. It is more controversial than the others, however, as the team behind it, Magic Destiny, changed a major plot point they happened not to like. Long-time series fan Rebecca Capowski maintains an accurate translation of the scene in question on her site, along with other material related to the series.

Scenery Recalled – The translated transcript of what is actually happening in that scene.