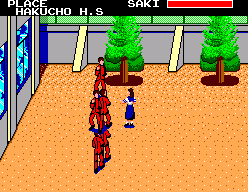 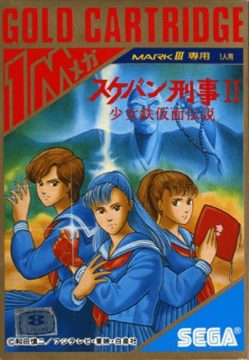 During the Sega Mark III’s life, there were a few licensed tie-ins that melded adventure and action genres. Two of these, Kujaku-Ou and Anmitsu Hime, made their way overseas, stripped off their license, and released as Spellcaster and Alex Kidd: High Tech World, respectively. One game that wasn’t so lucky was Sukeban Deka II. 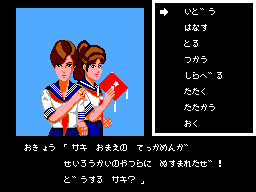 Sukeban Deka tells the story of a band of delinquent school girls, who have been drafted into a secret organization that hunts down other criminals. Indeed, the title translates to “Delinquent Schoolgirl Detectives”. The series began in 1976 as a manga, but exploded in popularity with a live action TV series that began in 1985. The second TV series, called Sukeban Deka II: Shoujo Tekkamen Densetsu, focused a girl codenamed Saki Asamiya spent most of her life wearing an iron mask, and fights with a deadly yo-yo. (The translated subtitle means “Legend of the Girl in the Iron-Mask.”) The trio is rounded out by two other girls, Kyoko Nakamura and Yukino Yajima. This series was incredibly popular as it featured Yoko Minamino in the starring role, a singer who would become one of the most popular Japanese idols of the 1980s. Vanillaware’s adventure game 13 Sentinels: Aegis Rim featured a character that was a schoolgirl delinquent detective as an homage to Sukeban Deka.

The Sega game is based on the second series, hence the title Sukeban Deka II (there is no “Sukeban Deka I”). The game begins with Saki’s mask being stolen, so her and her squad take off to check out the local high schools. The investigation sequences are presented as a first person, command-based adventure games, like many similar games of the era. Once you’ve found the right objects, you’ll trigger an enemy encounter, which are presented as side-view belt-scrolling sequences like Double Dragon. As Saki wielding her yo-yo, first you fend off a group of thugs, then you need to take down the boss. Certain items in the adventure scenes will call in your pals to briefly aid in combat. Much like Portopia, the game that pretty much set off the Japanese adventure game craze, there’s a few first person mazes to explore (including one where you can trigger a bomb and must escape in a time limit).

Unfortunately, the game is pretty tedious. Without a strategy guide, there’s little direction beyond fumbling around, and the action scenes aren’t all that interesting, but when you know what you’re doing, it can be beaten in less than twenty minutes. The music is pretty decent, though, even if there aren’t many tunes, and there are a few cameos from classic Sega characters like Alex Kidd, Opa Opa (Fantasy Zone), and Teddy Boy. The ending tries its best to draw Yoko Minamino’s portrait as realistically as possible for an 8-bit system, but doesn’t quite work out. 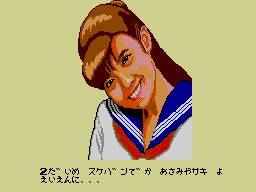 At any rate, Sukeban Deka II isn’t a very good game, but it is a fascinating glimpse into a uniquely Japanese fad of a bygone era. Some of the series, both live-action and anime, have been translated into English, with one of the movies being renamed Yo-Yo Girl Cop. A Famicom game called Sukeban Deka III (again, based on the third live action TV series and not a sequel to Sega’s game) was released in 1988 and is an action-RPG with alternating overhead and side-scrolling segments.