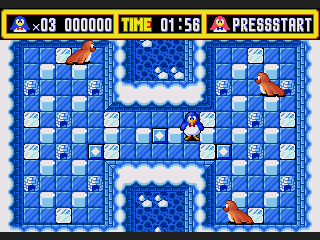 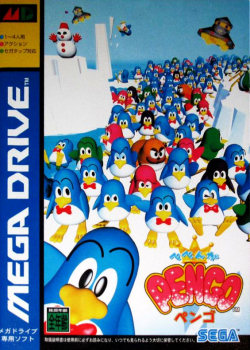 The 16-bit revival of Pengo is basically a Bomberman ripoff, and a pretty blatant one, at that. Just like Bomberman, you’ve got a single player mode with some ridiculous plot, even though everybody plays these for the multiplayer alone. 13 years after Pengo single-handedly exterminated the Sno-Bees, a passing meteorite smashes a magical crystal the penguins apparently use to ward off global warming. The rise in temperature causes the last Sno-Bee alive (At least, that’s what one assumes it is) to melt from the block of ice it was trapped inside. After it grabs the pieces of the shattered crystal, or “Cristals” as the game refers to them, it leaps into another dimension. It’s up to either one or two penguins to make their way through stages like Ice World, Sand World, and Toy World.

Much like the original game, the goal of each board is to destroy every enemy on the board using whatever ice cubes you have on hand. This time around, however, you’ve only got a few ice blocks on each board to use against your enemies, instead of a whole maze worth of them. Each level now has its own unique layout, made up of solid walls and small obstacles that have to be destroyed with ice blocks before Pengo can pass over them. Much like the original game, you’ve still got eggs that enemies will hatch out of once the board starts to empty out, but this time, the only way to deal with them is to get out of the way once they hatch. The diamond blocks also return, clearing the screen of enemies if you can match three of them in a row. Take care this time, though, because they’re not quite so unbreakable anymore.

Much like Bomberman drops, well, bombs, hitting the B button will make Pengo drop an ice crystal wherever he’s standing. After a couple of seconds, the crystal will form into a new ice block. Keep in mind that while you can kill enemies by having them walk over an ice crystal just as it forms, having Pengo do the same will freeze him in place for a few seconds. You can still kick around blocks by using the A or C buttons, and just like the original Pengo, this is your main way of dispatching enemies. This time around, however, the ice blocks have a few new quirks for you to keep in mind.

Whenever an ice block is destroyed, it’ll shatter, letting off an ice cloud on its opposite sides. This ice cloud will not only kill enemies (and Pengo, if he’s too close), but it can also push around other blocks, causing some big chain reactions if you can set it up right. There’s also a trick you can pull where if you have a row of blocks lined up, hitting the one closest to Pengo will only cause the furthest to slide. This is pretty handy if you ever end up in a situation that calls for more than one block. You can also kick one block into another, causing the other block to slide forward. Physics, and all that.

The ice block gimmick is the one thing keeping Pepenga Pengo from being a total Bomberman clone, and to its credit, it does give it a different feel. Since you don’t have to worry about your ice blocks blowing up and killing you, you have a bit more time to think about what you want to do with them. The way you can set up blocks in just the right pattern to make a big chain reaction is pretty interesting, too. Much like Bomberman, you’ll also occasionally find some power-ups hidden across the board, which let Pengo drop more ice blocks, make him invincible, award him points, or freeze the enemies for a few moments. The game’s nice enough to let you keep your powerups if you die, too, so you’ll only lose your ice upgrades if you have to continue.

The story mode is split up into eight worlds, each with three levels and ending in a boss fight. Each level has its own unique layout, and the further in you get, the more gimmicks start getting placed onto the board to make things tougher for you. There are things like arrow blocks, which carry your blocks around, whirlpools that warp you around the board, and rotating sawblades, which, uh, kill you. Since you’re not dealing with the Sno-Bees anymore, each world also has its own enemies to deal with. Thankfully, this time, they don’t hunt you down like a bunch of cute, fuzzy Terminators. Some will charge at you if you get in their line of sight, while others fly over obstacles, shoot projectiles, or just wander around at random. The bosses don’t really have much to speak of, as they all tend to move back and forth, pulling off the one attack they have over and over. 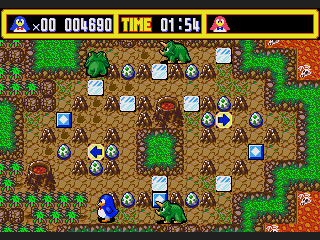 It’s generally a lot fairer than your average Bomberman game, which is good news for people who tend to be awful at it. The big difference is that you don’t have to time your ice blocks quite as perfectly as the bombs, so that generally makes things a lot easier on you. You also don’t have to do the entire board over again if you die or continue, which is a big improvement. You only get four continues to beat the game with, but considering that you get passwords that let you start off at the beginning of each world, you can still work your way through easily. You also have the option of doing the story mode with two players, and you thankfully don’t share continues. Oddly enough, it’s the Player 2 penguin that’s the red one, even though you always played as the red penguin in the original Pengo.

If you ever get tired of doing the story mode, however, you always have the Battle mode to try out. If you thought the single player mode sounded familiar, this is where the whole “Bomberman ripoff” part really becomes evident. You can have up to four players, either controlled by the AI, or four human players, if you happen to have a multi-tap on you. Once you start a battle, your goal is to use your ice blocks to slay the other multicolored penguins on the board. The last penguin alive wins the round, and the first one to win three rounds is the winner of the match. In true Bomberman fashion, there’s also different items that either help or hurt you, and some stages have hazards to avoid. Much like the single player mode, the battle mode’s best described as “Bomberman, but slightly different”.

The game looks decent enough, although there’s hardly anything that’s going to stretch the hardware to its limits. Each world has a unique look, even if everything falls under the usual game cliché from the ’90s. Since you’re not dealing with the Sno-Bees anymore, each world has its own unique enemies to fight, like walruses, fish, or dinosaurs. The theme for each world, while mostly distinctive, isn’t really all that catchy, especially since none of the themes from the original arcade games make an appearance.

Overall, Pepenga Pengo isn’t a bad game, it’s just incredibly unoriginal. Sure, the ice blocks give the game its own twist, but in the end, you’re just playing Bomberman variant. It was not released outside of Japan, and it’s also one of the most expensive titles on the Mega Drive, so it’s really hard to justify the high price tag. It is available on the Japanese Wii Virtual Console, at a much cheaper price of course.