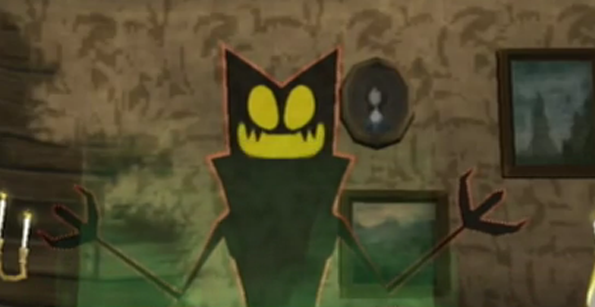 Okage: Shadow King (Boku to Maou in Japan, officially translated to “Me and Satan King”), published by Sony Computer Entertainment on the PlayStation 2 in 2001, is the first game developed by the obscure Zener Works studio, and the only one to really stand out in their ludography. Even though it was localized in English, the game was kind of ignored, especially in Europe, where it wasn’t released at all. Zener Works started out in Sony’s famed console’s early years and it seems their project had budget or technological restraints as it is stored on a CD rather than a DVD. It’s not a puzzle game, however, nor is it a versus fighter. It’s actually an RPG! A PlayStation 2 RPG smaller than 700MB? Now that’s quite a limitation isn’t it, especially considering the multi-disc epics in the PS1 era. 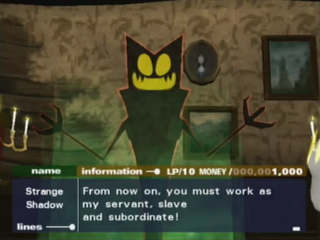 The story follows the misadventures of an ordinary boy called Ari. A very ordinary boy. So ordinary, actually, that almost nobody cares much about him… when he isn’t bossed around or simply ignored. “You always seemed to live in someone else’s shadow!” say some folk from his native village. It’s quite ironic, as Ari’s shadow is the one that’s inhabited by a certain Lord Stanley Hihat Trinidad XIV, or “Stan” for short, the evil-ish successor of the great demon Gohma. Indeed, when our hero’s father opens up a strange old jar hoping it would cure his daughter of the curse that has forced her to talk in Pig Latin, this dark entity pretending he’s a Devil King offers to exchange his services as an improvised exorcist for Ari. It seems the poor boy was a perfect fit to be Stan’s slave, as well as a nice receptacle from which the Devil King can order him around to use him in his quest for world domination. And here you are, leaving home in order to conquer the universe… even though you just wanted to mind your own business from the start. 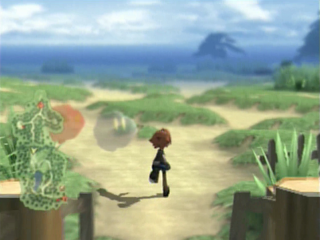 Okage remains a rather classical RPG , with a regular village-overworld-dungeon structure. Talking to NPCs and looking around your surroundings is often required to make the story progress, so you’ll have a nice look around the world’s universe even if you’re kind of a speed runner. The overworld in question isn’t a world map but a group of different and distinct sections, so the change of scenery is there. There are no random encounters on these maps, by the way, rather enemies appear as small clouds and by coming into contact with them, then combat will begin. 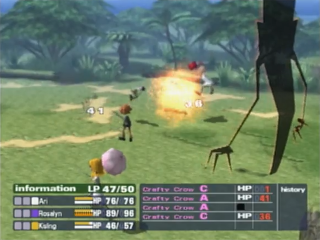 The battle system, while similar to that found in the Final Fantasy series, does have a few subtleties. The main point is still to bash your enemies with physical attacks and crush them with offensive spells, but said spells costs health points rather than magic points, which themselves are stored in a collective pool for all of the team to use for boost and healing spells. The team is limited to three characters (among the six that will join you along your quest) and Ari is at its core. Getting him killed will directly brings a game over screen. He’s also the sole character able to perform the Overdrive spell, which not only boosts an ally’s attack power but enables him to use a Burst attack that deals a great amount of damage on all enemies (bursting, of course, dissipates Overdrive’s effect). This boost spell will prove necessary in your strategy, especially since there can be as much as 10 foes at the same time. It’s also possible to combine the attack of “waiting” teammates in order to make your assault converge on a single target. The most noticeable change, however, lies in time management – once an action time bar is filled, time freezes, and it only starts flowing again once you’ve chosen your command. This allows your characters to actually attack at the same time, which adds a dynamic twist to battles – it can be a bit unsettling at first, but you’ll soon get used to it. There’s an issue with this though – sometimes it’s impossible to choose which individual enemies to attack from a group of identical ones, which can be be cumbersome in some situations. The game isn’t really that hard though, so it’s nothing dramatic. In short, the battle system isn’t bad at all, just don’t expect it to be that much out of the ordinary. 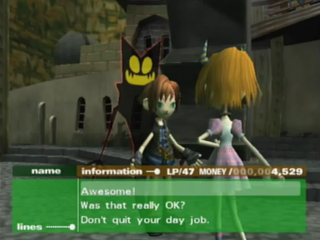 Note that Stan is not a playable character. He does sometimes decide to perform powerful attacks on his own, but it’s pretty uncommon. It tends to happen when you’re getting in trouble but it remains random nonetheless, so don’t count on him to save the day every time. He also pops out right before the beginning of a battle in rather rare occurrences, in which he asks you to assemble three answers to form a sentence – if the outcome pleases him, he’ll open the battle with a devastating attack. All of these additions are a little extra that magnifies Stan’s arrogance and reminds you of his inopportune presence rather than fully integrated mechanics, though. 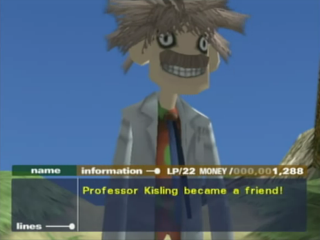 The experience system is slightly different as well. In most classical RPGs, enemies are worth a fixed amount of experience while the character’s need for experience to level up increases as they climb the level ladder. In Okage, it works the other way around – getting your character to the next level will always require 1,000 experience points, but enemies will award you with less and less experience as you get in higher levels, which is similar to how it’s handled in Suikoden. It doesn’t have a massive influence on the progression curve unless you’re barreling through, in which case you may have to get grinding a few times. 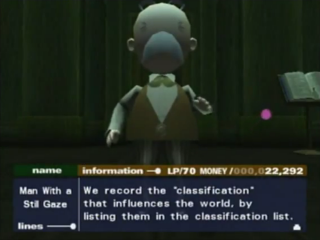 There is a black mark in the game’s landscape, though: the dungeons. Indeed, apart from a few exceptions, they’re all practically identical. They’re composed of rooms established on several underground floors, in which you have to find and destroy Urns (a kind of midboss) in order to open access to the next floor, until you get to the deepest part where you will face the dungeon’s boss. There are a few additions to that design from time to time, like seals to activate, but it remains repetitive and bland overall. Plus, the fact almost all these dungeons reuse the same greyish texture doesn’t help in making dungeon crawling a bit more entertaining. It’s by far Okage‘s biggest flaw, especially since it contrasts negatively with the game’s charming diversity. 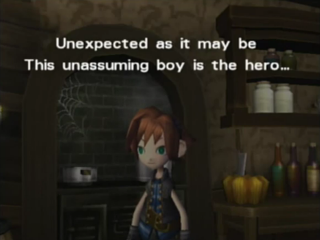 Now we’re getting to what makes this game awesome – its original and colorful universe. Not only was Tsutomu Sekimoto the art director, he was the character designer as well: the characters look like a blend of cute heroes from a children’s manga and weirdos from a Tim Burton movie, especially these models from A Nightmare Before Christmas, on which he worked with Henry Selick (and to which the game even makes a direct reference). Their personality match their visual style; these cat-eyed gothic fantasy characters really are lovable. Especially Stan, who may actually be this game’s best character. The monster design rather recalls hand-made figures or modeling clay creations, an interesting take on the regular RPG bestiary. The environment in itself, consistent with the game’s peculiar aesthetics. The depth-of-field blur (similar to that of 3D Dot Game Heroes, which would be released 8 years later), which was probably used to spare RAM, actually adds a nice stop-motion scale model effects to maps and villages. It’s true that this experience tempered by long loading times, but it’s nothing that drastically impedes the gaming experience. Let’s end this part on visuals with a bugging note: Ari’s eyes were altered in the localized version, so that they don’t look so wide-open as they are are in the Japanese version. How weird. 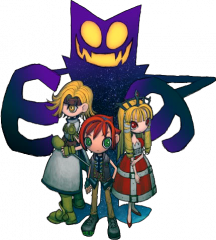 The soundtrack is not left behind either – no less than six different composers worked on it. It is predominantly electronic, but it does feature a track with a more acoustic feeling like the title theme “Emotional Universe”, which main instrument is a bagpipe. Village themes are nice and soothing, and each of these tracks have an indoor counterpart. Battle themes sounds way harsher, but they similarly have an alternate version that plays when you’re “disadvantaged” (which you may never be a single time in the whole game, though). The ending theme, “HigherBreath”, probably is the most well-produced track of the entire OST – not only does it blend techno and world music really well, it also features cute imaginary lyrics. 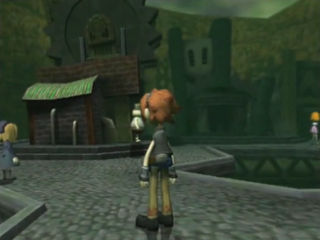 Indeed, Okage‘s freshness envelopes the entire production. Not only does the game’s universe stand apart thanks to its visuals, it also does with its scenario and dialogue. The game diverges from RPG tropes from the start, as you’re not a brave hero on a quest to save the world but a random guy unwillingly helping an Evil King take over the world. The scenarios that flow from this state of affairs are genuinely funny and surprising, and the answers you can pick probably are the funniest part of it. Like in most RPGs, you’ll often be prompted to pick something to say. There are a variety of attitudes to pick, ranging from “young shy kid” to “downright douchebag”. Your selections do determine the outcome of a late-game sidequest. But while Okage is obviously trying to make fun as its main point, this doesn’t refrain it from getting pretty deep later in the story (after a pretty mind-bending twist plot) and to propose an interesting reflection, which concerns video game as well as real life. The game does take a strange and unexpected yet compelling philosophical turn towards the end, without ever getting pompous. 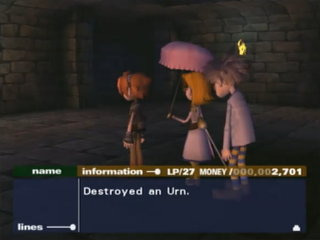 If it’s a pity the game remains substantially too classical, its unique universe definitely makes it up for it. If you’re in need of a nice and rather short (about 20-25 hour) RPG, Okage is the game you seek!