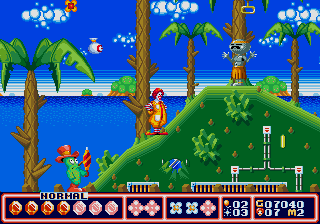 In the late 1980s and early 90s, there were a handful of platformers tie-ins with McDonald’s fast food. They were fairly odd in that, for games based on a restaurant, they really didn’t seem to be that focused on food, but rather on promoting the overall brand. They were even more unusual in that most of these games were actually pretty good, like Data East’s Famicom game Donald Land, and Virgin’s McKids and Mick and Mack in Global Gladiators. Fan favorite developer Treasure made a name for themselves with 1993’s Gunstar Heroes, but it was actually their second game on the Genesis; their first was McDonald’s Treasure Land Adventure, an early bit of contract work from Sega released earlier that year..

The game features the McDonaldland set of characters, which were introduced in the early 70s and were featured regularly in through restaurants until they started being phased in 2003. The story begins with Ronald McDonald walking through the forest, when he happens upon a piece of treasure map. He figures it would be a fun adventure to track down the rest of the map and see where it goes, completely unaware of the apparently evil creatures that hold the other pieces. His journey takes him around the forest, on a train to the big city, across the ocean, and then finally into outer space. 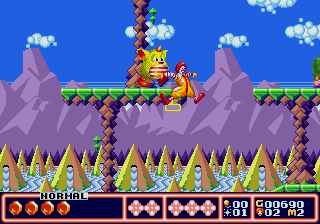 Ronald’s main method of attack is throwing sparkly magic across the screen. He also has hankerchiefs, which are extended directly upwards and used to grab onto grapple rings and send him flying upwards. His life meter is determined by jewels, which he is technically carrying, as you’ll see him drop one with every hit. There are also colored flowers (or rings, in the European/Japanese version) – if you collect three white ones or two red ones, then it will replenish a jewel. If you’re already at max, then the game will helpfully bank the flowers until you get hit and then cash it in, effectively extending your life meter beyond its max.

Also spread throughout the levels are gold bags. You’ll regularly come across shops, where Ronald can buy stuff (seemingly from himself, since he also runs the store), to replenish health or obtain extra lives and continues. There are magic power-ups, as well as balloons, which will save him from falling into pits and even allow you to float around briefly and land wherever you want. In a few cases, you’ll also come across a falling block puzzle mini-game, where you can obtain even more items cost-free, assuming you can match them in threes. 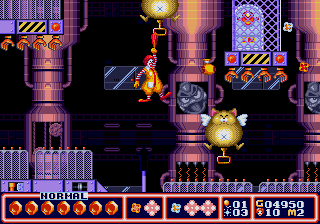 There are four levels altogether, which sounds pretty short, but each area is comprised of a number of areas, so ultimately the length is about typical for a Genesis side-scroller. There are a fair number of interesting challenges here, which show a preview of the kind of brilliant weirdness that would come to typify later Treasure games. The pathway to the first boss is a downward slope, where Ronald is chased by gigantic fish bones. When exploring a cave, you need to time your jumps between splashes of water, where safe zones are helpfully indicated, perhaps as a guide toward younger players. When scaling a large, partially assembled building, you’ll come across humorous sumo wrestler pigs, who will stop and wildly distort the girders. When riding through a train tunnel, everything will suddenly go dark, and you’ll find yourself jumping on the heads of ballerina bunny girls.

The cast of McDonaldland always had a whiff of Sid and Marty Kroft’s bizarre type of insanity to them (to the point where it was actually the center of a lawsuit), but this game goes even further in just how borderline demented it all is. Incidentally, you do meet some of the other characters – Hamburgler, Birdie, Grimace, and the Fry Kids – throughout your adventure, usually having been captured or in some other type of conundrum. Here, they ask that you sacrifice some of your jewels – technically your life meter, after all – in order to help them, but they’re often necessary to advance. 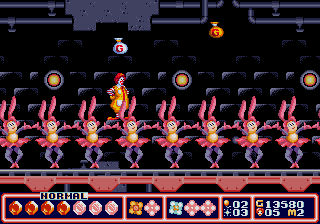 The boss fights are weirdly grim in the same way. As the Hamburgler hints when you come across him, the only way for the bosses to led their guards down is by eating some of Ronald’s gems. They each have a tractor beam attack, so you have to intentionally get hit, and then attack them as quickly as possible until they recover. The boss rooms typically have power-ups in them, and will infinitely spawn enemies that will drop further health items, but it’s such a curious conceit. But then again, it would’ve be a Treasure game if it didn’t have some kind of unusual mechanic.

Granted, McDonald’s Treasure Land Adventure doesn’t quite have the mechanical brilliance of their later titles – it’s a game that comes off more bizarre than clever. Still, the game looks and feels like a prototype for their later titles Dynamite Headdy, which not only uses the same type of grapple-based platforming, but has a similar visual style and has a soundtrack that sounds very similar.

Beyond changing the flowers to rings, the American version also changes the tribesmen enemies from stereotypical natives to electronic robots. It’s a positive change since it looks even strange, and therefore even more appropriate for the game. The European version is also much harder, with the default difficulty level starting you off with less health, and enemies taking much more damage. 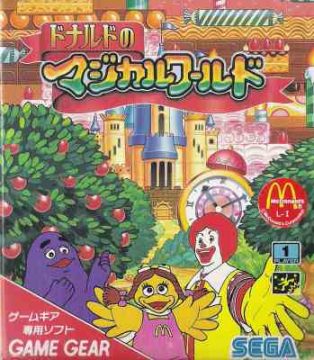 There’s also a Game Gear variation of this title, released in Japan as Donald no Magical World. While the game was technically never released in English speaking territories, if you play the cart in an American or European Game Gear, the language will switch entirely to English, with the title screen calling the game Ronald in the Magical World. While based on Treasure’s 16-bit title, this version was actually developed by SIMS, a company who was a part of Sega and worked on many of their 8-bit Master System/Game Gear titles in the early 90s.

It borrows some of its elements (including the concept, its soundtrack and visual style) but is otherwise almost a completely different game. There are still four main worlds – there’s still a forest stage, but then there’s a cake level, a clock tower, and a castle. There are handful of weird scenarios like in the Genesis game, like a segment where you’re stuck on a conveyor belt that’s feeding desserts into the mouth of a gigantic creature and you need to run away from it.

Ronald attacks with a short-ranged cane instead of magic; said cane can then be used as an umbrella to float in mid-air and extend jumps. The shop system is gone and the life system is greatly simplified; there are a couple of minigames, this time either a card matching memory game or one where you need to complete a picture of an item by collecting falling pieces. Most levels also require a bit of exploring to find a key to open a door to progress through to the stage.

Owning to the necessary exploration, weaker level design, and more awkward weapons, this Game Gear version isn’t really on the level as the Genesis game, nor is it quite in the league of other 8-bit Sega licensed platformers like Asterix or The Lucky Dime Caper. But it’s not bad either, and the visuals still plenty attractive.