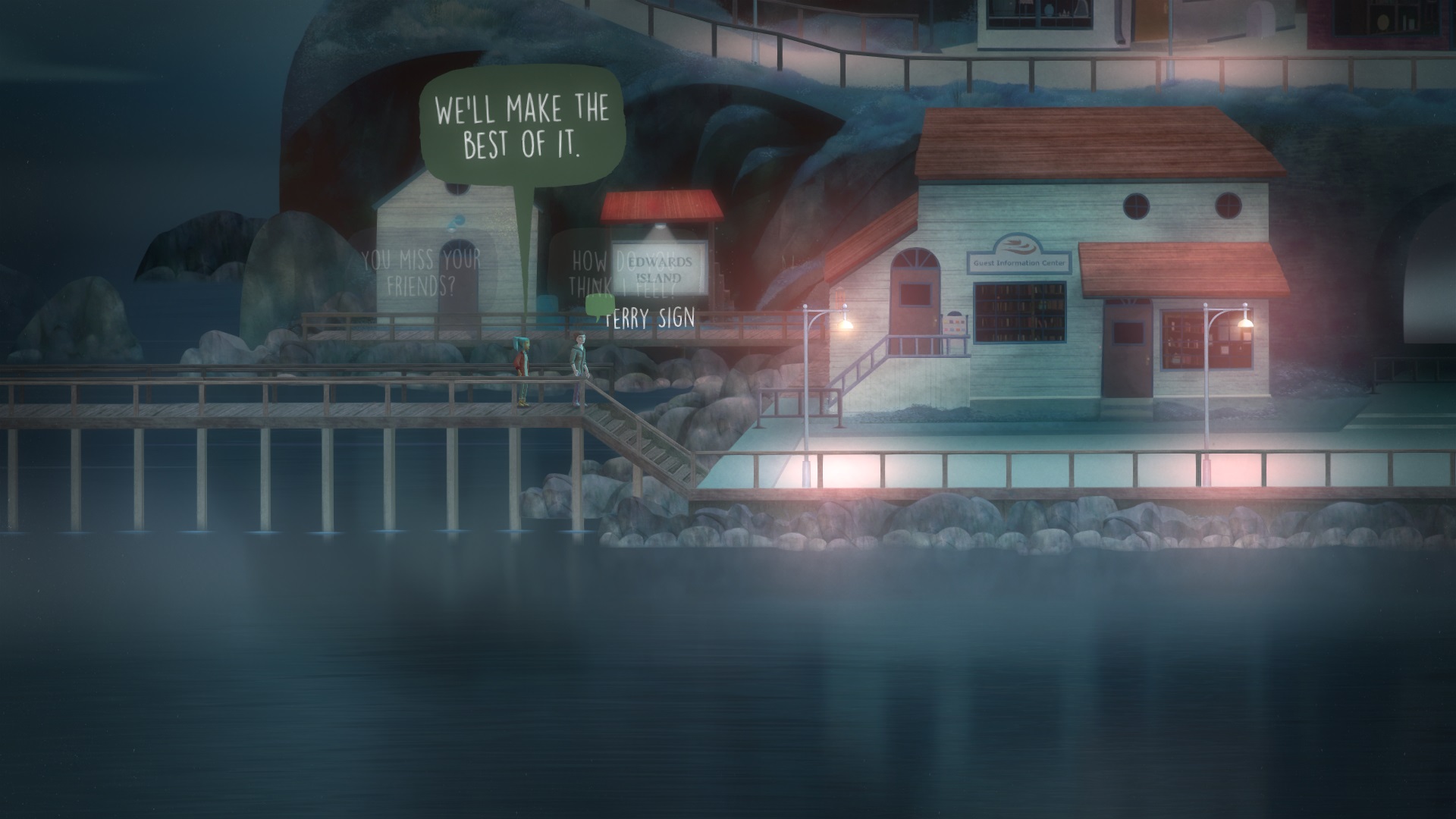 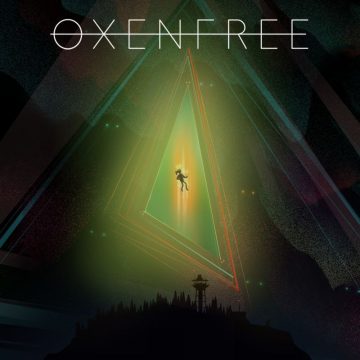 Over the last few years, there’s been an increase in the popularity and the general creation of narrative adventure games – adventure games where the focus is not on puzzle solving, but on the choices you make that then change the story. This is largely thanks to the success of games such as the time-travelling Life is Strange and the horrific Until Dawn, and particularly the vast majority of Telltale Games’ work (The Walking Dead, Batman: The Telltale Series, Tales from the Borderlands).

That Telltale connection is particularly relevant, since a pair of ex-Telltale developers then decided to create a narrative adventure game of their own, but with an interesting twist. Not only would the game focus on a blend of teen horror and supernatural mystery (a blending of genres not often explored in adventure games), but the main focus in terms of gameplay would be based around the player’s ability to respond to other characters’ dialogue in real time. 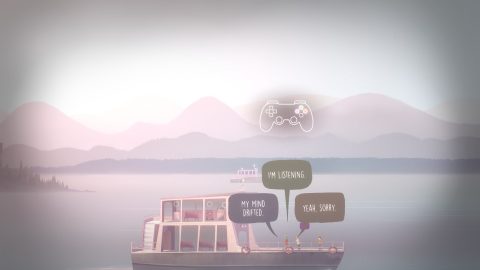 It may not sound like it, but the idea of making a game full of real-time dialogue choices, with a horror setting populated with a cast of teenagers, is one fraught with difficulties. Not only do all the conversations have to flow naturally from whatever choices you pick, but they have to be done while people are talking (whereas most games tend to make you wait until they’re done talking) and still have to seem natural. At the same time, the game also has to be convincingly spooky and have the main characters come off as believable people, as opposed to the kind of unrealistic ‘totally radical’ caricatures that plague countless other media.

With all that in mind, it’s actually a miracle that Oxenfree manages to pull off such a feat without falling to pieces. And in general, despite a few faults here and there, it’s a well written, enjoyably unsettling adventure game that fans of the genre and horror should definitely check out.

Oxenfree has you playing as Alex, a teenager who’s recently had to deal with both the death of her brother, Michael, and the gaining of a new step-brother, Jonas. She and Jonas are invited out to the mysterious Edwards Island for a night of teenage debauchery, alongside her stupid, but ultimately harmless childhood friend Ren, the bitter Clarissa (who was Michael’s girlfriend prior to his death), and the quiet, sensible Nona. 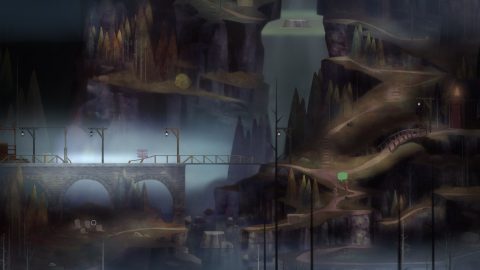 However, when Alex uses her pocket radio to tune in to a strange signal deep within the island’s caves, she and Jonas are separated from everyone else. They begin to explore the island in search of their friends, but it slowly becomes apparent that something is not right, and that whatever is responsible for this has plans in mind…

Oxenfree is a narrative adventure game that, while visually resembling the likes of Monkey Island and Broken Sword with its zoomed out camera, doesn’t feature much in the way of complex puzzles or inventory management. The only puzzles that have to be solved involve taking out your pocket radio and tuning in to the right frequency (which is signaled when the tuner goes red and you hear a deep booming noise).

The general thrust of the game is to walk to wherever you need to go, talking to the characters, and picking from one of three suggested dialogue choices during the conversations. At any time while other characters are talking, you can interrupt them with whichever choice you make, or you can choose to say nothing at all if you wish. 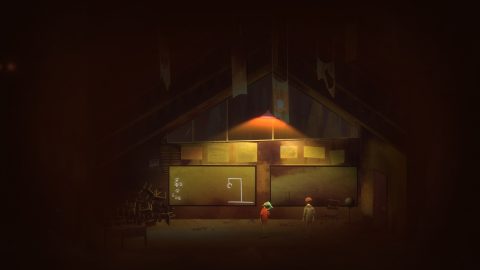 It’s actually a pretty genius gameplay idea since it encourages you to get engaged in the conversations. You have to pay attention to what people are saying and really think about what you should say, all the while mentally juggling the characters’ various hopes and fears, your previous actions, and what you would like to do in mind. However, the execution of this mechanic is not perfect.

First off, there is the typical adventure game issue of writing non-specific dialogue that will make sense, regardless of which dialogue choice you made. This is understandable, since it would be a nightmare to write a dialogue perfectly suited for every dialogue choice you make, especially when there could be so many combinations. But it does affect the believability of the game upon replaying it, since it becomes apparent that certain lines were written to fit whatever you said, and not to a specific thing.

There’s also a bit of ambiguity in regards to when you are able to respond in a conversation. Sometimes, you want to let the character finish talking before do anything, but then your prompt vanishes. And other times, you will make your choice, but then have to wait until the character stops talking. It breaks the immersion a little bit, and there should have been a way to either fix this problem or make the overall responses more consistent. 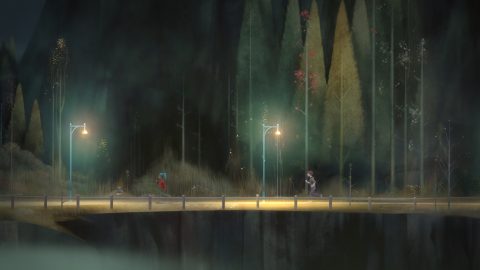 (On a minor note, regarding the difference between the console and home computer versions: making your dialogue choice on consoles is really easy since you just have to press one of the face buttons, while you have to drag your mouse over your preferred choice and click on it for the computer ports. It doesn’t sound like much, but when you’re trying to respond to conversations in real time, it should be made as convenient as possible.)

In regards to movement, your walking speed is pretty slow. While this is intended to keep you walking and talking, without forcing you to wait at the edge of an area until the conversation ends, this also means that getting anywhere can take a while (which isn’t helped by the fact that during some backtracking portions of the game, there isn’t any dialogue to keep you busy while moving). This is also another issue that crops up when replaying the game, since the slow pace can make getting to particular sections a bit of a pain.

Since this is primarily a narrative-driven game, the main focus is on the story, and it’s on the strength of the story as to whether the game lives or dies. Fortunately, Oxenfree manages to craft a well-told, sometimes even touching, story that achieves what it set out to do without much fault. 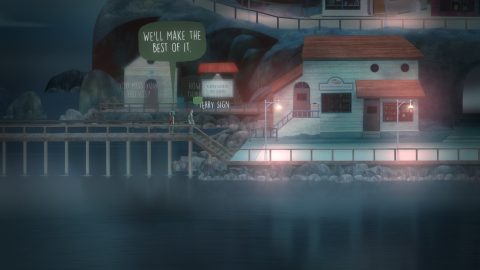 First and foremost, praise has to be given to the way the characters are written. Teenagers are often the hardest characters to write, usually because the writers themselves are so much older that they tend to have a romanticized, disparaging or similarly inaccurate view on how teens speak and act. This is why most teens in media tend to be either laughably pretentious beatniks (see: Shaggy from pre-90’s Scooby-Doo), or sarcastic snark machines (see: every Joss Whedon character ever).

So it really is an accomplishment that Oxenfree creates believable teenagers that feel like real people. This is because the characters are written as real people, and not clueless caricatures. Yes, they have broad personality traits often seen in teen fiction (the ice queen, the weirdo of a childhood friend, the quiet one, etc.), but those are used as a base to build interesting, likable people instead of making up the entirety of those characters.

The dialogue manages to balance the line between being sincere and being appropriately sardonic almost effortlessly (almost, since there is occasionally a line that will sound a bit too much like it was written for a snarky college student). This is accentuated by some strong voice acting, with actors who fit their roles and do their best in giving great performances. 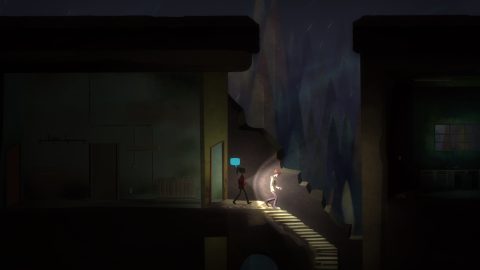 What really makes the story work is how the characters are what drive the plot forward, instead of being pulled along by the nose through a series of random events that have nothing to do with them. It’s their personalities, their relationships with each other, and their motivations that ultimately take the story down its many twists and turns, and it’s all the more affecting and satisfying for that.

Helping this is how effectively spooky the game is. While never delving into the realms of macabre horror or gruesome imagery like Dark Seed or Clock Tower, Oxenfree does a very good job at unsettling the player in all manner of ways. Off-kilter conversations, strangely familiar happenings, old radio tunes looping awkwardly through your pocket radio: it all makes for an quietly disturbing experience where nothing is ever as it seems, where the lack of any certainty may very well be the only thing you can be certain about.

This is especially the case when you consider how the presentation is used to ramp things up. The soundtrack is full of synthesized tunes, layered with numerous effects (decay, notes gliding up or down in pitch out of nowhere, odd cuts) to really convey the idea that not even the music is safe from the general instability of Oxenfree. While the tunes themselves aren’t memorable when heard in the game, it could be argued that they’re not supposed to, and the music overall works very well regardless. 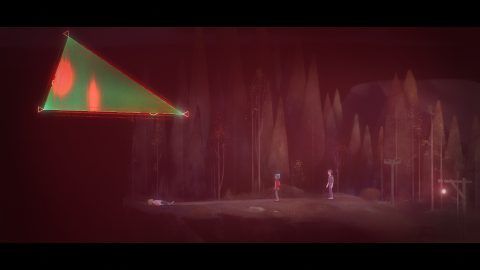 The visuals also play their role in ramping up the tension, with effects such as flashes of static, a strong use of color to indicate a change of mood, and distant, almost doll-like characters that give the game an uncanny valley feeling. Paired with some subtly gorgeous backgrounds, it gives Oxenfree a unique, memorable look. The only real problem with the graphics is that they can be a bit too zoomed in at times, which is a problem when you have multiple winding routes to take and can’t see far enough to realize which way you’re meant to take.

While certainly not perfect, Oxenfree needs to be praised for how many concepts it does well, for both story and gameplay. Even if narrative adventure games aren’t a genre you typically give much attention, Oxenfree is an unusual exception worth checking out.

A playlist of YouTube videos discussing the creation of several aspects of Oxenfree – https://www.youtube.com/playlist?list=PLBhaF40-OdNigV4OSmQuFpkT5BxOLxr-O