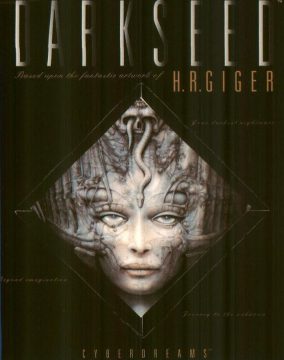 Ridley Scott’s 1979 movie Alien still ranks as one of the scariest movies ever made. There are at least a dozen reasons why it’s still so effective while other horror movies of the day seem like child’s play, but a huge chunk of credit goes to H.R. Giger, the Swiss artist (or, rather, “surrealist”) who developed the eponymous xenomorph. His works combine nightmarish biological creations with dark, mechanical imaginary, often overlaid with immensely disturbing psychosexual themes. It’s all very distinctive, and many video game developers of the ‘80s copied his style wholesale, as evident in arcade games like Contra and R-Type. Outside of the officially licensed Alien games, Giger also supplied artwork to the Dark Seed series, two adventure games developed by Cyberdreams. 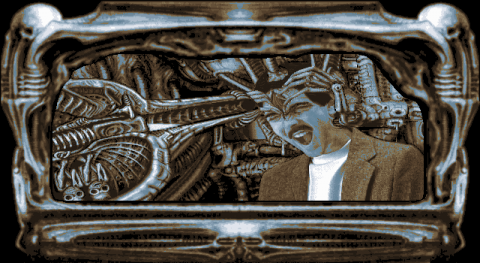 Dark Seed involves an unfortunate young man named Mike Dawson, who discovers a portal to an alternate dimension called the Dark World. This terrifying realm consists of the H.R. Giger artwork, and is like a negative image of our own world, which is dubbed the Normal World (the question of why the denizens of Dark World don’t regard theirs as the normal world is never answered). Despite the generally horrifying environments and equally ghastly inhabitants, the folk of the Dark World aren’t necessarily evil. Some of them are quite friendly, in fact, but they’ve been taken over by a contingent of aliens calling themselves the Ancients. These guys, on the other hand, are legitimately evil, and conspire to drain the Normal World of all its life. The catch is that they are unable to cross dimensions themselves, instead relying on other methods to launch their invasion. This is where Mike Dawson comes in, apparently being one of the only people who can switch between worlds using mirrors. Like all great psychological horror stories, there’s some ambiguity as to whether the Dark World is real or merely a hallucination of an extremely ill person, although solid answers are never given and neither theory is completely airtight. 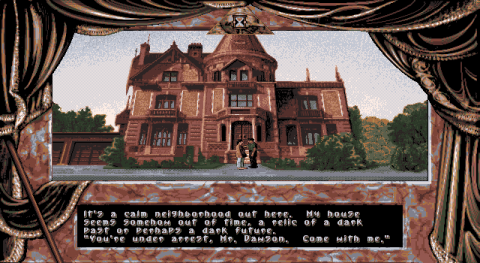 Dark Seed, along with Infogrames’ Alone in the Dark, comprise the first wave of computer games that tried implementing the horror genre in an interactive setting. Games such as these helped pave the way for the modern survival horrors that became popular in the 32-bit console generation. So while Dark Seed might seem quaint today, given the technological constraints, it was incredibly unsettling in the early ‘80s. 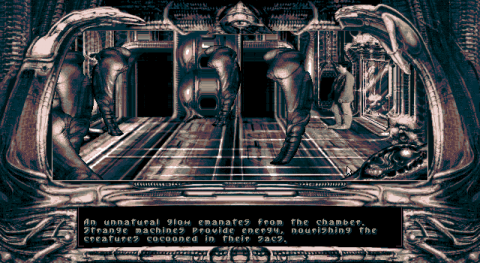 Dark Seed begins amidst a nightmare wherein our hero, new homeowner Mike Dawson, envisions an alien gun ejaculating into his forehead. He awakens, understandably shaken up, and with an astounding headache. After spending a day or so exploring the neighborhood, Mike discovers that one of the mirrors in his house leads into the Dark World, the place he sees in his dreams. It should be no surprise that aliens have impregnated Mike with one of their gruesome offspring. Its birth will kill Mike, obviously, but it also potentially spells the end of humanity. Their plan must be foiled, but Mike is not alone, as he is guided by the Keeper of the Scrolls, the creepy female-esque figure on the box cover, who holds no love for the Ancients. Furthermore, the houses’ previous inhabitants were aware of the connection between the human and the so-called Dark World, and much time is spent following their tracks. 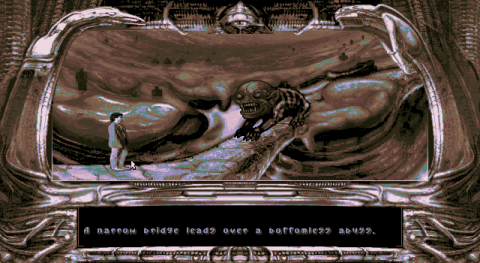 It’s undoubtedly a cool premise, one which draws generously from the works of H.P. Lovecraft, and the whole “dual world” aspect is an interesting precursor to Konami’s excellent horror series Silent Hill. But the proceedings are quite sparse, seeing how there’s very little storytelling outside of a few expository scenes. There are a handful of characters in town, but they never speak more than a line or two. Each room has a text description at the bottom of the screen, a remnant from the days of text adventures, but the writing is astoundingly juvenile. “My house seems somehow out of time,” Mike explains when in front of his abode, “a relic of a dark past or perhaps a dark future.” The foreshadowing cannot possibly get more ham fisted. 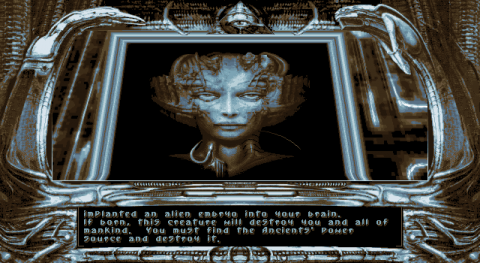 At least Dark Seed delivers on the promise of H.R. Giger artwork. The palette in the Dark World changes to an unsettling grey, and scenery is warped into the frightening bio-mechanical horrorscapes the Swiss surrealist is known for. While it looks cool, it just doesn’t feel as shocking as it should. There are a few guards which will kill you if you get too close, and all of the switches will electrocute you if you grab them, but otherwise there’s no danger and no tension. Mike can stroll along freely and the horrifying inhabitants just don’t seem to mind. 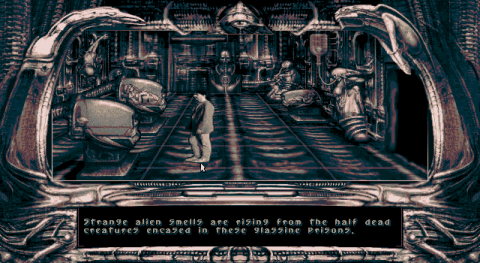 While the game runs in high resolution 640×480, it’s limited to 16 colors, due to the limitations of VGA, but what it does with that small palette it does damn well. Mike is a digitized sprite, played by one of the designers, also named Mike Dawson. While his animation is exceedingly jerky, it actually doesn’t completely clash with the scenery, due to the decreased color palette. The nightmare scenes, much like the head-rape in the intro, are also memorably gruesome. Unfortunately, the game only takes place in a window about half the size of the screen – the rest is simply an overly elaborate frame, with the dialog window at the bottom. 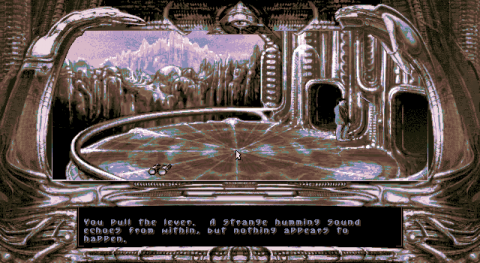 While the visuals do a decent job of building a suitably creepy atmosphere, the rest of the game is undone by extremely haphazard design. Dark Seed takes place over the course of three days, and runs in real time. There is little direction or purpose beyond the occasionally cryptic clues stumbled onto. It’s very possible to waste too much time and miss events, which is troublesome. There are numerous actions you need to take on the first day, but none of that will even be evident until you visit the Dark World, which isn’t even possible until the second day. It is practically guaranteed you’ll get stuck in some kind of unwinnable situation at some point, as these scenarios are poorly telegraphed. Late in the game you become wanted by the police, who stand guard outside your house. There is no way back in, unless you tied the rope to the gargoyle on the balcony earlier in the game. This is one of the least cruel moments – there are some absolutely infuriating ones. 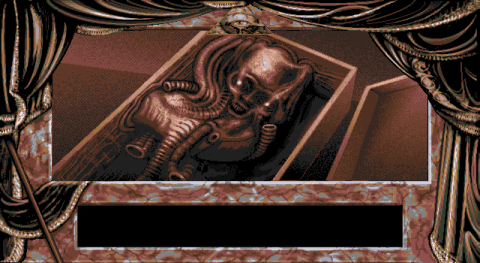 For example, the Normal World and the Dark World are connected to each other, but in vaguely defined terms. Sometimes these make sense, like opening a secret passage in the human world will trigger its counterpart to open in the parallel world. Others are more bizarre, like how starting the car in your garage back home will then activate the power generators of the alien starship in the Dark World. But the most maddening involves your run-ins with the police. The clues tell you that the police station is important, for some reason, but won’t tell you why. When you’re arrested in the human world you can leave three, and only three, items beneath the pillow. Later, when you get in the same exact scenario in the alien word, all of these items are mysteriously retrievable. This leap in logic is frustrating enough, in that it’s this one arbitrary location where items can apparently teleport between worlds, but there is never any suggestion of what items you should be bringing. 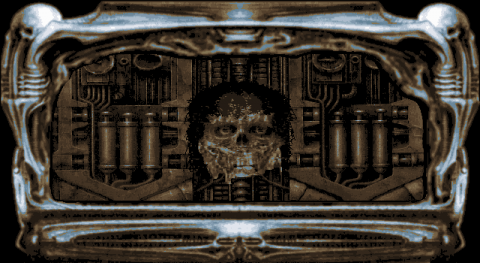 And even amidst the terrible framework, the events that occur are simply bizarre. One important event, for some reason, is to meet your new neighbor Delbert for a get-together. When you do meet him, all he does is play fetch with his dog, almost infinitely. This is a scenario that, if you miss, will render the game unwinnable, but the only thing you need to get out of this is the stick he’s playing with. This is then used to distract the dog’s Dark World counterpart, which is a gigantic canine-thing. That’s all kind of ridiculous, but it gets worse. The first time you enter the Dark World, you can’t actually do much other than explore. Sure, there are important plot revelations and all of that, but the only tangible thing to obtain on the first trip is a shovel. Not a fancy, futuristic shovel with mysterious properties or anything, just a regular old shovel. Let’s break this down – your character wandered into an immensely hellish landscape, faced off against beings the very thought of which would drive lesser men to complete insanity, and it was all just for a shovel, the kind of which you should have been able to buy at the general store down the street? It’s a common trope in adventure games that you need to go through tremendous lengths to get everyday items, but this is just silly. 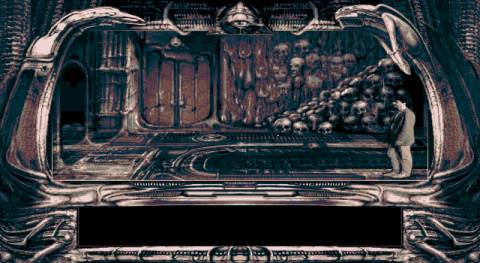 Dark Seed was originally released on both the Amiga and IBM PC platforms. Visually they’re practically identical, although the PC version runs at a slightly higher resolution. Mike’s movement is sluggish in the Amiga version, but the MOD music is appropriately creepy. In comparison, Mike is much speedier in the DOS version but the FM synth music almost completely ruins the atmosphere. The CD versions on both platforms include voice acting, but since most of the script is simply Mike talking to himself, it’s pretty sparse. It was also ported to the Sony PlayStation and Sega Saturn, but released only in Japan. No effort was made to improve any the visuals, and as such, it looks tremendously dated compared to its contemporaries. While the text was translated into Japanese, the voice acting is still in English. 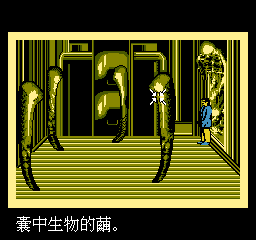 Far more bizarre is the Famicom version, which is an unofficial cartridge published by Asian outfit Mars Production. Visually, the palette had to be pared down more than it already was. Nearly everything in the Normal World is one of two shades of orange, while practically everything in the Dark World is some kind of pea green. But the room design is still more faithful than the NES port of King’s Quest V, and even the nightmare scenes actually look fairly decent for the system. Movement is awkward and glitchy, as you still control Mike with a cursor, but it’s functional. 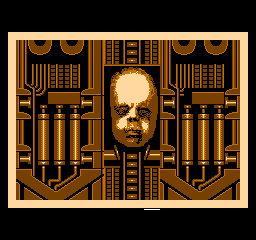 The music is awful though, as there’s only one extraordinarily abrasive song that plays through the entire game. Surprisingly, the developers sprung for a battery backup, allowing you to save your game, although there’s only a single slot. All of the text is in Chinese, but most of the puzzles are remarkably faithful, other than some chunks cut out here and there. A few screens were removed, and the ending is massively truncated. It’s vaguely impressive for a bootleg product, although on its own terms, it’s only barely playable. 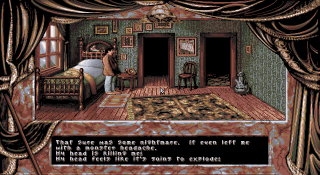 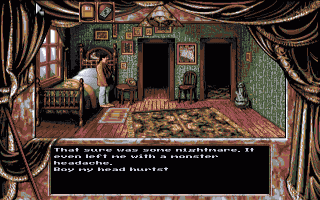 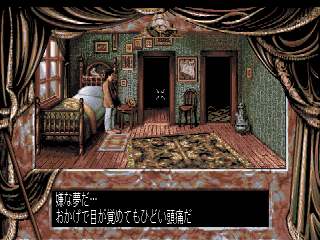 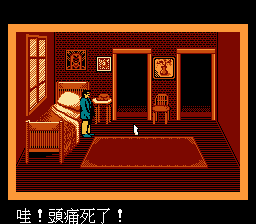