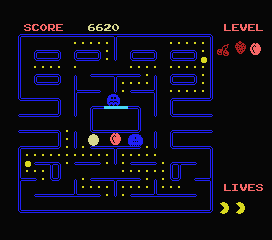 Oh Shit! is such a bizarre creation, one that’s totally unashamed to swear and steal at the same time. It’s a complete 100% rip off of Pac-Man, released for the MSX by Aackosoft. Everything, from the ghosts, to the maze, to the little intermissions between levels is ripped straight from Pac-Man. At least they bothered to change the ghost’s names from Inky, Blinky, Pinky, and Clyde to Joey, Paul, Willy, and Frankie. The ghosts also all act the same, all of them being aggressive instead of how the ghosts all had their own distinct strategies like in Pac-Man. Obviously for people who plagiarize games, plagiarizing them well isn’t a top priority. There are also some other subtle differences, such as power pills not lasting as long and the game speeding up on higher levels, but otherwise Oh Shit! is basically Pac Man, but with more swearing.

When the original Pac-Man died, he melted away and made one of the most memorable sounds in video games. When Pac-Man Imposter dies in Oh Shit!, you hear a digitized voice shout out “Oh Shit!”. That’s pretty much the game’s entire gimmick. Now, some home ports of Pac-Man have been historically bad, iparticularly the infamous Atari 2600 version that dropped ghosts in favor of exclamation points, pills in favor of wafers, and completely changes the maze into something that is not nearly as fun. Oh Shit! is, at least, somewhat playable beyond the game logic inaccuracies, and the digitized sound quality is quite good for 1987.

It also must have taken a lot of guts to not only steal Pac-Man, but to put the word “Shit” right on the box and try to sell it in Europe. That being said, it was released as Oh No! in the United Kingdom. The fact that no one really remembers it indicates that the controversy they probably intended just never happened. There was also an alternate version, this time simply called “Shit”, with new box art that would lead one to believe that it involves vampires in some capacity.