Does the name Terry Gene Bollea ring a bell? No? What about Hulk Hogan? The Hulkster was one of the most popular wrestlers in the world between the 80s and the late 90s, and, like many others, he tried to capitalize his popularity on other forms of entertainment. During the 90s the man starred in a few family-friendly films such as Santa with Muscles and Suburban Commando, which are usually considered terrible. Only the latter one is still remembered today, basically for two reasons: the Nostalgia Critic’s “I was frozen today!” catchphrase (which actually was said by Christopher Lloyd in the film itself) and the fact that somebody made a video game out of it. Okay, maybe not many remembered the latter one, but still. 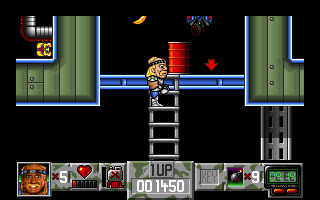 In the film, Hogan is Slab Bulkhead… sorry, wrong crappy sci-fi movie. Hogan is Shep Ramsey, a space badass who gets stranded on Earth and finds himself living with the family of Charlie Wilcox, a mild-mannered guy played by Christopher Lloyd. The usual “fish out of water” gags ensue, plus a bit of action and special FX since Ramsey has been followed to the suburbs by the evil General Suitor and his bounty hunters (including a then-unknown Mark “The Undertaker” Calaway). 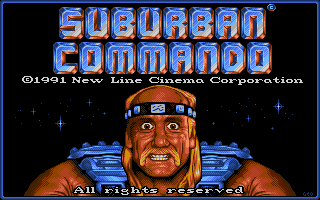 What’cha gonna do when the pixelated Hulkster grins at you?

Like many other video games based on films, Suburban Commando is only vaguely related to the original motion picture. Given that Shep is an interstellar traveler, the first stage is a simple horizontal shooter leading to Suitor’s spaceship; the other stages are platforming (since almost every other licensed game of the period was a platform game) followed by one-on-one boss fights (since you can’t do a game with the Hulkster and do away with the fights). One stage is set on the aforementioned spaceship, and the remaining others on Earth, but the locations don’t really resemble the ones in the film, and Wilcox with his family are nowhere to be seen, not even in cutscenes because this game has none of them. Unless he’s that lanky guy apparently humping a trash can in level 3.

The platform levels are fairly big and labyrinthine, and to clear them Shep has to search for specific spots or items. In the first one he has to plant bombs (this is how the game nods to Ramsey blowing up Suitor’s spaceship), and in the Earth-based sequences he needs to find chips and then power crystals to re-fuel his ship, whereas in the movie only one such crystal appeared and was in plain view. The levels are full of the stereotypical platform game stuff such as bouncing pads, spikes, elevators, keys and keycards to open doors (along with more unusual obstacles like floors that prevent you from jumping), plus a ton of points items like fruit and coins, likely just because every other platformer had them. There are also time extends, since all missions have a 10 minute time limit. In general, the structure of the levels is vaguely similar to Team 17’s Superfrog, including hidden areas, albeit with more punks and killer robots that either go forever back and forth or stand still and try to shoot us. They all look goofy like Shep himself. 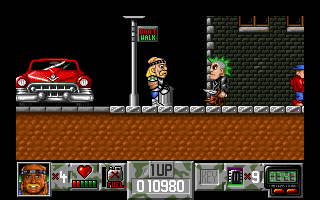 Shep has a few moves under his belt such as punches, an uppercut, a flying kick and a sweeping kick. However, these are barely useful since their range is very short and the collision detection isn’t always up to par. So it’s best just to avoid enemies when possible even if they go down in one hit, given that they respawn after a while. Shep is so badass that he doesn’t need any ranged weapon to go against his foes, but they could have given him at least the freeze ray. Also, in the DOS version, one should play with a joystick since the keyboard controls have a weird button layout (Q and A for up and down, O and P for left and right) that makes playing cumbersome. 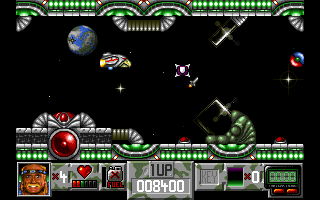 When a level is completed, our hero has to face a boss. In the Amiga version, they are some sci-fi guys invented for the game, another guy who is probably one of the bounty hunters pursuing Shep, and big bad Suitor himself with his reptilian final form. In the DOS version the first two are replaced by two random palette-swapped thugs, and every one of them has the same picture near their lifebar, even Suitor. This goes on to show how much they really cared. The boss battles are made to look like a fighting game, but actually it’s just another platformer section, since they control exactly the same, with the same moves mentioned before and no further complexity than “avoid the enemy and punch/kick him until he dies”. They are most likely an afterthought and as such they are boring and forgettable, even the final battle against the big bad. At least the initial shooter segment, while still bland, was somewhat competent and fun. Until the tons of power-ups make it laughably easy, that is. 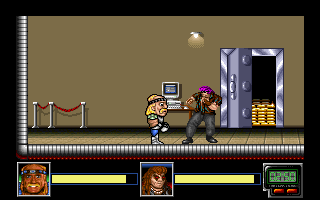 The DOS version also has this strange stylistic choice where the bosses have more or less realistic human proportions, while Hogan and every other enemy in the game is. All in all, however, the graphics are nice and colorful in that 90s platform game sort of way, more so in the Amiga version with its pretty colored backgrounds rendered by the power of the “Copper”, while the DOS backgrounds are mostly black. It should be noted that every version, including the C64 one, has quite fluid scrolling. The BGMs range from “somewhat catchy” to “annoying”.

There are also other differences between versions. Both Amiga and DOS have passwords and three difficulty settings (appropriately named “Wimp”, “Mean” and “Macho”), whereas the C64 gives you three continues to complete the entire game and only has one difficulty that is higher than normal, for example the shmup sequence gives you much fewer power-ups. The ending in all games is a single, sad screen with a picture of Shep and a generic text. 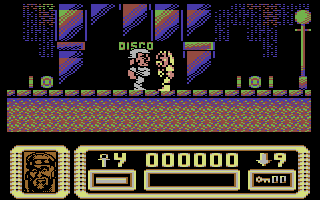 Can Suburban Commando be considered a kusoge? Yes and no. On one hand, it tries to do something different by mixing various genres and is still somewhat playable. On the other, it is completely generic and forgettable, even if it were to stand on its own without the Hulk Hogan license (which wasn’t all that great anyway). If one was to remove the mustache from Shep’s sprite, it could pass for some random sci-fi platformer that nobody would care about. Well, at least it’s better than almost every game based on Ahnuld’s movies.