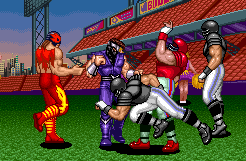 Although Toaplan is mostly known for their amazing shooters like Truxton, Zero Wing, and Batsugun, they often dabbled in other genres. Knuckle Bash was one such attempt, a belt-scrolling beat-em-up that plays much like a slower version of Final Fight – two buttons gameplay, health-draining super attacks, and so forth, although strangely it lacks weapons. While technically it does little more than ripping of the mechanics of other beat-em-ups – and doing a fairly mediocre job at it – it truly excels just because of how damned goofy it is. 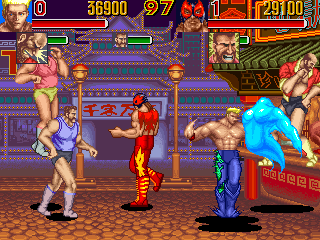 The story involves a group of heroic professional wrestlers going off to quit their jobs so that they can fight a gang called The Bulls. The Bulls are a weird bunch, consisting of everything from male stripper mimes to ninjas to American football players. Their leader is a freakish fat man that wears a flayed pig head as a mask. One of the highlights are going to a football game to beat up a football player, only to find a secret trap door under the football stadium with a dungeon underneath it. At one point you fight an ancient demon in a forest, only for it to reveal himself as your manager weating a mask. Needless to say, Knuckle Bash does not take itself too seriously.

Before choosing your characters, you get two places to start – “Off to Destroy The Bull Group” or “Fierce Battle of The Four Mad Bulls”. None of this actually means anything, except which set of stages you accomplish first because all stages must be completed before moving onto the endgame. Defeating either of these missions unlocks you a character.

El Plancha (Dice is his American Name) is a Mexican luchador and the strongest of the initial characters. He is somewhat slow, but his special attack is amazing. He will grab an enemy and spin them around until they catch fire, hitting other enemies in the process.

Michael Sobut is an Elvis impersonator and one of the coolest characters in the game. While in other beat em ups, you are fighting Elvis look -a-likes (God Hand, Battle Circuit); here you finally get to play as one. Michael Sobut’s special move is where he will grab an enemy, turn them into a guitar, set them on fire, and play them while shouting “Rock and Roll!” This only damages one opponent, but it does heavy damage and will usually defeat most minor enemies instantly. It may not be good crowd control, but it makes short work of the bosses.

Jack Brow is the fastest initial character and looks a lot like Street Fighter‘s Guile. He’s also the least interesting character in the game. His special attack has him lifting up an enemy and juggling them like a clown. This has medium range and can damage other enemies if set up right.

You unlock Mr. Hayate by defeating the “Destroy The Bull Group” mission. He’s a very tough ninja that wears a leather mask. He excels in both speed and power, but he gets knocked around easy. His flying kicks look cool and his special move has him spinning until he becomes a tornado.

You unlock Kyaputeso by defeating “Fierce Battle of The Four Bulls”. He’s a hulking American football player that you fight in the middle of a trapped stadium. He excels in strength and stamina, but he is unfortunately very slow. Kyaputeso has the most abusable special attack in the game where he slams his fists on the group and makes shockwaves, heavily damaging all enemies on screen. 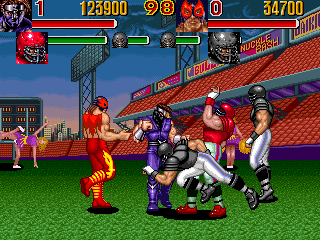 Junya Inoue, better known for his work with Cave on Dodonpachi, Guwange, and many other Cave games, designed Knuckle Bash. A lot of the enemies wear pastel colors and the pallet is generally softer than most of his other work. Seeing that he can do something silly and lighthearted such as Elvis and a football player saving the world with wrestling moves and something as dark as Dodonpachi Daioujou shows that he has a lot of range. 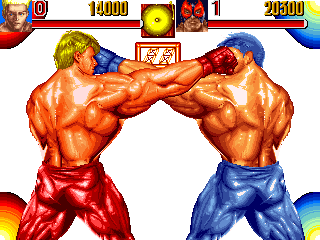 There is also a mini game similar to Mortal Kombat‘s “Test Your Might” segments. It has two unnamed fighters that never appear anywhere else in the game punch each other in the face both at once. Which one is left standing is determined by who can tap the attack button fastest in the time limit. The winning player gets a health bar boost from this and the loser gets no penalty. This mini game is completely absent if you are playing solo, so it could be a reward for playing two player.

The game might not be fantastic, but it gets by on being an average beat em up that is just ridiculous enough to make it enjoyable. And unlike many of Toaplan’s other games, Knuckle Bash is actually very easy, especially when compared to similar games like Streets of Rage. 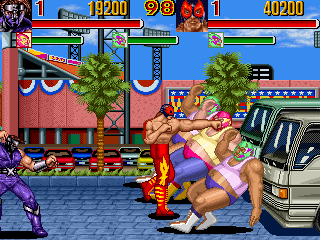 Knuckle Bash never received a port to home consoles. The arcade version was published by Atari Games in North America. A sequel was apparently planned, as after Toaplan went out of business, a modified version of Knuckle Bash’s arcade board was discovered. The only two noticeable differences are a new title screen and a change button. The change button lets you switch between any of the fighters on the fly, even letting two people have the same one. The change button may have been implemented for testing purposes, but if the fighters were more differentiated, it could have been a very nice new gameplay mechanic. Other than the new title screen and change button, Knuckle Bash 2 is exactly the same as the first one.