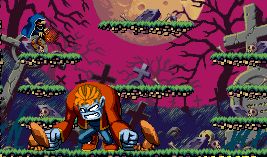 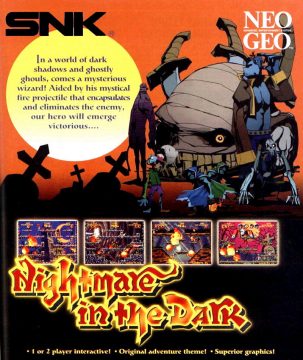 “…this was an ancient story when people still believed in the power of witchcraft. There lived one gravekeeper at a very small village in a remote region. He lived a quiet, solitary life in a corner of the Cemetery, for he kept away from village people due to his very ugly appearance. One day he found that the graves were ransacked and some corpses were stolen. He didn’t want village people to know that, he decided to eliminate the burglars by himself. Thus he patrolled the Cemetery every midnight…” 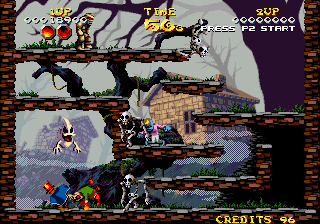 Such goes the opening text crawl to Nightmare in the Dark. Developed by an unknown company known as AM Factory and published by another unknown company known as both Gavaking and Eleven, Nightmare in the Dark was released for Neo Geo MVS arcade boards in the year 2000. While its presentation is excellent, the gameplay is lacking in a few areas and the game has some frustrating issues as well. 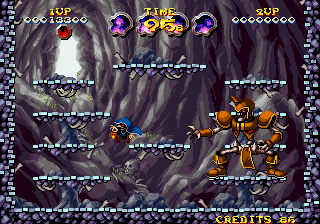 In Nightmare in the Dark, you play as a lone grave keeper (or two grave keepers if playing with a friend) who takes on all sorts of monsters such as zombies, ghosts, mummies, and hunchbacks in an arena platformer environment. However, the gameplay is a near-exact carbon copy of Toaplan’s Snow Bros. The player still hits enemies with projectiles (though with fire instead of snow) until they turn into a ball, then picks it up and rolls it to destroy more enemies. Once destroyed, the enemies drop loot as well as power-ups. The power-ups are exactly the same, with potions yielding buffs to movement and attack speed as well as range. Every five levels, the player fights a boss, as opposed to every ten levels in Snow Bros.. The length of the game is also shorter as well, being only 25 levels as opposed to 50 in Snow Bros.. 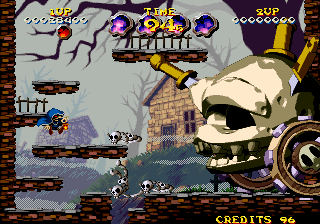 The game can also be hard in a fairly cheap manner. The grave keeper moves at a very slow pace, and while power-ups can be found that increase his movement speed, they go away either when he loses a life or goes to the next level. The enemy AI can also be annoying as well, as a hunchback or some sort of ostrich thing can rush the player from behind when they’re trying to turn an enemy into a fireball, or worse, attack them as soon as they pick up the fire ball. The player only gets three lives, and health power-ups (represented by chunks of meat) are very rare. 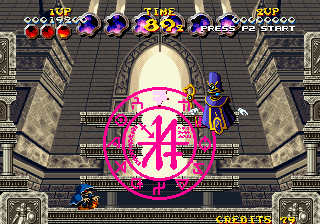 The gameplay may be derivative, but Nightmare in the Dark really shines with its presentation. The cartoonish sprites for the enemies are gorgeous, especially fluidly gooey animation of the sludge ghosts. The introductions for each stage are enticing as well, with bats that fly across the screen and words that bleed downward into nothing. Even the backgrounds have some cool animated elements, such as moving grass or shimmering light. 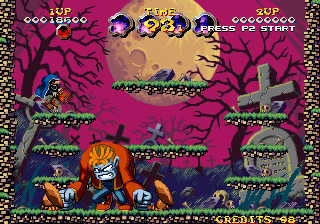 But the absolute best part are the bosses. The Frankenstein boss in particular has an awesome character design, with tons of personality in his movements and actions. The other bosses, such as a giant armored skeleton knight and the mysterious final boss, also have some visually amazing effects in their animations. The music is quite catchy as well, populated by a loud bass and a mix of jazz and funk that could have only come out of an arcade game at the turn of the millennium. In spite of its plagiarist nature, it’s definitely worth a shot for the spooky visuals alone.