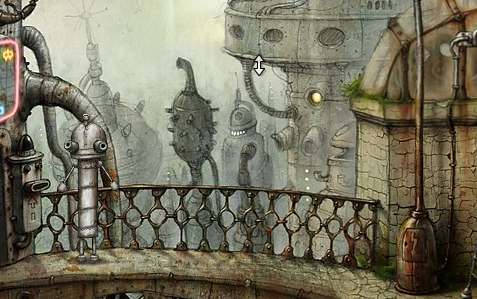 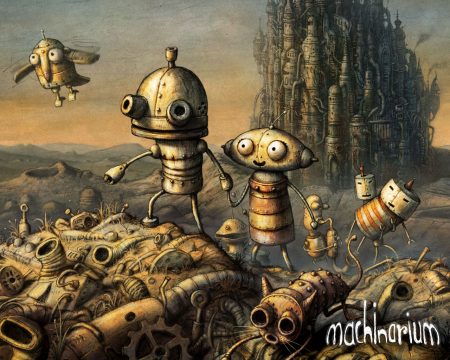 There are few game so gorgeously understated as Machinarium, a gorgeous little adventure game by Amanita Design, a small team of seven from the Czech Republic. Beyond the title screen and the option bar, there is no writing, no dialogue, no words to be found anywhere. There is no real introduction beyond the immediate plight of our hero, a cute little robot who is unceremoniously dumped in the midst of a junkyard. We are not told his name, but it is Josef, named after writer Josef Capek, who coined the term “robot”. We also know that he’s more than a bit distraught at waking up amidst a pile of discarded rubbish, having to reassemble his poor little body piecemeal. His goal is, it seems, is to merely return home, although additional bits of the story are related through animated thought bubbles, sketched like a flip book. Leave Josef standing still, and he’ll reminisce about his missing friend (purportedly a female, but it’s a bit hard to tell with robots, isn’t it?) When Josef meets a rotund robot, he recalls a scene from his childhood where this portly fellow cruelly knocks over his sand castle. Further adventuring will reveal that this gang – named The Black Cap Brotherhood – is causing significant troubles for the other residents of the city, and your paths will cross more than once. It does appear aimless at first, and it does all come together in the final segments, although the experience is more about exploring its world than following a story.

It’s fascinating, because Machinarium is a world of strange, conflicting beauty. It’s dirty and dilapidated, walls cracked and rusting, and yet every single background is a work of technical mastery. It seems like a contradiction, then, that a world so dingy manages to come off so colorful. Much of the style draws from steampunk, as if the robots were powered by gears rather than circuit boards, and made of tin rather than steel. Many older Sierra and Lucasarts games had painted backgrounds, but were mostly limited to 256 color VGA graphics. By the time technology had allowed for something more advanced, they were ditched in favor of computer rendered graphics, before 2D was tossed out wholesale for fully 3D environments. Machinarium not only stands as evidence that there’s still an amazing potential for 2D artwork, but also disproves the commonly held belief that games developed in Flash are destined to look cheap and gaudy. 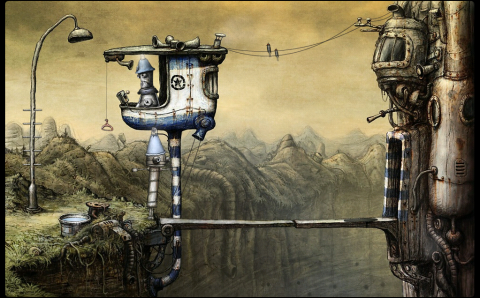 It’s easy to draw comparisons between Machinarium and Pixar’s Wall-E, although more than a few elements – particularly the robot design – seem to channel Futurama, even if unintentionally. Josef himself might be a cuter, tinier version of Bender. He’ss impossibly adorable, with bulging eyes like a fish, with a gaze that’s never quite centered. His only real special skill is the ability to extend his body upwards and scrunch himself downwards, necessary to reach high objects or fit through small holes. He spins his head in disapproval at impossible actions, he’ll slide down railings, he’ll teeter haphazardly while moving when vertically extended. His only audible sound is a cross between a honk and a bark. The soundtrack matches up with the visuals, and while minimalistic through most of the journey, it comes remarkably to life in certain areas. Striking the same balance as the visuals, it’s full of vibrant life but simultaneously more than a bit haunting.

Much of the atmosphere comes not only from the music and artwork but the very design, some of which is bizarrely humorous. There’s a robot who looks perhaps a bit stereotypically Jewish (what with the large-ish nose and Hasidic curls), who must be diverted by drawing him into a temple. There’s a strangely cockeyed owl who has a fascination with mimicking Josef’s every movement. There’s a hulking guard robot who really wants nothing more than batteries for his little bunny pet. And one has to wonder what use a robot has for a toilet, much less toilet paper. (The fact that the bathroom, up high in a skyscraper, seems to empty out into open air is more than a bit distressing.) 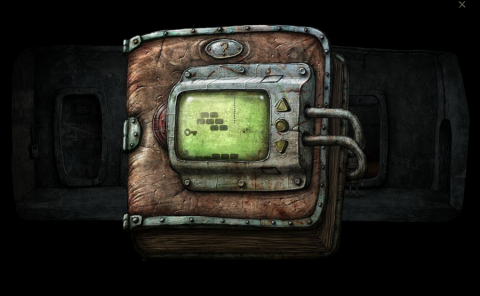 There’s also a healthy appreciation for old school arcade games, as evidenced by the mini-Space Invaders clone. One of the final puzzles involves an old-school maze action game, where you control a tiny little blue robots shooting other tiny little red robots, which is made a bit annoying due to the awkward mouse control. The built-in walkthrough also requires that you play through a short side-scrolling shooter segment, guiding a key through various environments to a lock at the end. This hint guide, too, is completely visual, illustrating the solutions with comic book panels, which are worth unlocking even if you’ve already figured out what to do.

With its emphasis on atmosphere over exposition, it might seem like Machinarium shares more in common with Myst and its ilk, as compared to traditional point n’ click adventure games, but the game never feels empty, and there’s a healthy balance of puzzles, both inventory and logic based. The first few puzzles restrict you to a single screen, making it fairly easy to figure out the solutions via the process of elimination. Once you make your way back into the city, the game opens up a bit, presenting you with multiple screens and ongoing puzzles, but they never become overwhelming. The logic puzzles are also not particularly obtuse, largely avoiding the math textbook style conundrums that too many of these types of games possess. You’ll try lighting up tiles to form a path around obstacles, or drawing stars without crossing lines, or play a variation on box moving puzzles. 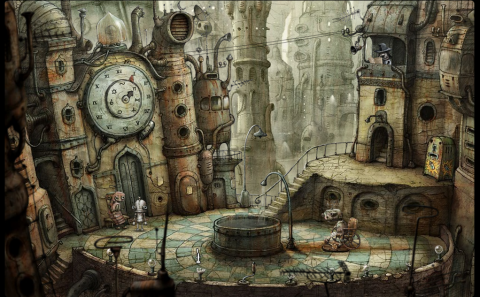 Undoubtedly one of the most inspired is a quiz game, delivered by a sentient ventilation system. It will gives you an equation with visuals and ask you to pick an answer from a series of three selections. It’s actually easier to get these right than wrong, but that’s the point. You need to overthink to continuously get the wrong answer, causing your opponent to get so furious that it literally blows a gasket and spits its fan across the screen, allowing you entrance into its tunnels.

The only notable problems with Machinarium come with its interface. It’s not always responsive, and it can be tricky to move Josef exactly where you want him. Furthermore, hotspots won’t activate unless Josef is standing next to them, making it impossible to comb the entire screen with the cursor. And while it should seem natural to right click to disable a selected inventory object, instead it pops up with the Adobe Flash options menu, an unfortunate intrusion into the impeccably designed world.

Machinarium strikes a balance that few adventure games can claim. Its puzzles can satisfy all kinds of genre fans without overwhelming newbies, and its visual style, both in motion and in stills, is a work of art in and of itself. It’s gorgeous, eminently playable, and fascinating throughout. It’s not an overly long game, but the price is more than worth it for an experience that’s almost altogether priceless.