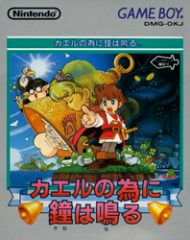 Despite its technical limitations, the Game Boy did get its fair share of great action/adventure games. Of course, the first titles to come to everyone’s mind are the games from the Zelda series. Gargoyle’s Quest and Bomberman Quest are also often considered classics as well. But one of Nintendo’s own obscure games is Kaeru no Tame ni Kane wa Naru, a Japan-only game whose title can be translated as “For the Frog, the Bell Tolls”.

Only a few glances are enough to notice the obvious graphical similarities with the Game Boy Zelda games. Which is only natural, considering Link’s Awakening – which was released the following year – was based off this game’s engine. Both games use an overhead perspective with flip-screens rather than scrolling. Another unique aspect is the use of both top view and side view during gameplay. The first game in the Zelda series already had used this combination, but Kaeru no Tame ni Kane wa Naru pushes this much further – every dungeon actually plays almost like a platformer game (even if jumping can be quite awkward), whereas the overworld is designed in a classical RPG way and is more focused on exploration. Although, “exploration” isn’t saying much for a game whose overworld can be completely explored in less than ten minutes (without the dungeons of course). Despite this weakness, the game actually has a pretty decent progression curve and, surprisingly, it’s all thanks to the plot: albeit linear, it still manages to be engaging.

As the story goes, once upon a time were two princes, who were both friends and rivals: Prince Richard and Prince Sablé (the latter named after the French biscuit). Both of them were fine swordsmen and each of them matched the skills of the other in all fields… with the exception of brawling, where Prince Richard would always best his timeless friend and rival. When the two of them heard about the kidnapping of Princess Tiramasu, ruler of Mille-Feuille Kingdom, they set up a contest – the first one to save her would be the winner! Richard stormed on ahead… how can our hero, Prince Sablé, possibly win this and settle his old rivalry with his fellow competitor?

The game is packed with over-the-top humor, which gives the game a charming and distinctive trait. It doesn’t take itself too seriously and absurd situations are common practice through the adventure. It even feels like it’s intended as a parody of the RPG genre at some points, even right at the beginning of the game, where the hero spends all his 9,999,999 in gold coins over trivial goods, money that obviously would’ve been better allocated elsewhere.

Even more bizarre is the battle system, which is basically automatic. It is engaged by simply touching monsters, and is visually notified with a cartoon-ish cloud of dust over the two fighting characters. The speed at which deal and receive damage is based on your stats, and the goal is to be the last brawler in one piece. However, there is no possible control whatsoever apart from the escape, which works seemingly at random. You simply can’t intervene in the course of the battle for the most part. If you’re powerful enough, you win – if you aren’t, you’re just done for.

The game gets its name from the fact that the princes (both of them) end up being cursed to take on the form of a frog. The hero can (eventually) switch back and forth, with each having their own abilities. Frogs can swim in water, of course, but they’re terrible in combat (unless the enemy is classified as an “insect”, in which case they’re eaten automatically by the hero).

Most of the time, not being able to get through the end of a boss battle means you have missed a treasure chest. Indeed, treasure chests contain vital gears that can rise your stats (strength, defense, speed, etc), and that’s why the game is so straightforward – you really need to carry out a thorough exploration of your surroundings to find ALL the treasure chests so you can beat the boss or overcome an obstacle. At least a couple times throughout the game, the most recent shield available in shop will be required in order to deal with the local boss. This may seem annoying at first, but the not-so-wide world map prevents the game from being too frustrating, and you usually know exactly where to search and where you have to go in order to progress.

Talking about difficulty, the game is quite easy for the most part, seeing you just have to walk in the battle and wait for the moment of truth, but it can still be very frustrating at times. Stumbling upon an enemy too strong for you is definitely going to happen at least a few times during the course of the game. Why was escaping made so damn harsh, then? After all, you know you’re doomed when you’re out of your league stat-wise. The “One Touch, One Kill” lava is pretty sadistic as well, especially considering a Game Over sends you back to the nearest village’s hospital… which isn’t always that near!

That’s the only major letdown of this five (or so) hours-long quest. The graphic are the higher end of the Game Boy’s library, and Kazumi Totaka’s score is pleasant as a whole apart from a few screechy tunes.

Fan translated into English by Eien Ni Hen and ryanbgstl from Romhacking.net, Kaeru no Tame ni Kane wa Naru clearly is an hidden gem: easy to play, funny and light-hearted, yet quite unique. Prince Sablé will learn about far more than just courage and love during his journey, and it’s quite a surprise in the end to get to see so crazy situation in a game running on the Nintendo’s 8-bit handheld.

Kaeru no Tame ni Kane wa Naru was released on the 3DS Virtual Console in 2012, but only in Japan.