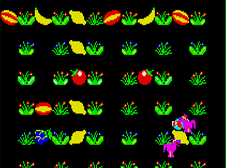 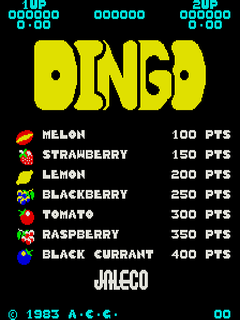 Rareware has always been a developer that’s been proud of its history. Even in a gaming environment that’s slowly forgotten them, they’ve made no secret of the work on systems like the ZX Spectrum that brought them to fame. There is one game that they happened to forget, however, along with just about everyone else. Far from a lost classic, Dingo is yet another maze chase game in a time when they were already flooding arcades. Little has been lost from its almost utter obscurity, and yet, it’s a curious blank spot in the company’s massive history. 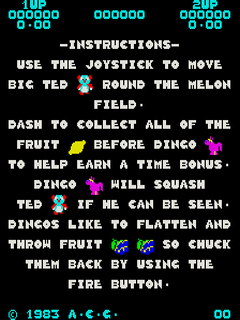 You take the role of “Big Ted”, a koala placed in the middle of a single screen, fruit-filled garden. Your goal is to wander around and collect all the fruit, after which you’ll do it again. Opposing you are multiple pink creatures, ostensibly the titular dingoes, who’ll kill you on contact. By pressing the single button the game offers you, however, you’ll throw a fruit in the direction you’re moving. Care needs to be taken, however, as you can only hold one fruit at a time, no matter how many you collect in a row. You’ll also need to stay out of a dingo’s line of sight as much as you can, as they can toss fruit and take you out that way, as well. 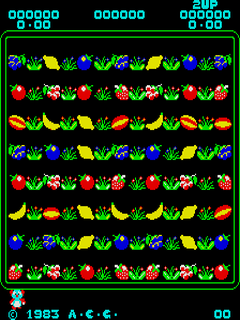 That sums up the entire game, to be truthful. There’s little to no variety, and not much in the way of strategy. The dingoes move and throw fruit more or less at random, so it all generally comes down to how good your twitch reflexes are. Even by the standards of the era, it’s pretty simplistic, but at the very least, there’s nothing broken about it. It can even be somewhat fun, at least for the first handful of attempts. The lack of any real substance or goals means there’s not much allure beyond that. The only break you get is a very short intermission scene showing Big Ted picking up a sequence of fruit, a possible way of earning extra score. 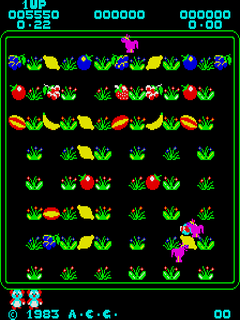 The graphics are simplistic, even by 1983 standards, although at the very least, your character is identifiable as a koala. The song that plays throughout the game is cheerful and frantic, matching the game’s pace, but gets repetitive quickly. In the end, there’s little reason to recommend Dingo, aside from the pedigree behind it. Since then, Rare has made little to no mention of it. No ports, no releases on recent compilations, no brief mentions on interviews. Only a 2015 tweet from Rare founder Tim Stamper gives any evidence that anyone there remembers it at all. 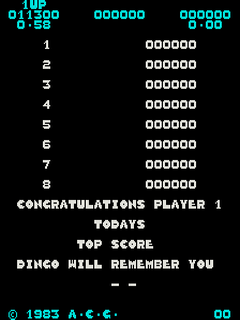 “DINGO WILL REMEMBER YOU,” the game ominously states on its high score screen, stark white text on black.

But who will remember Dingo?