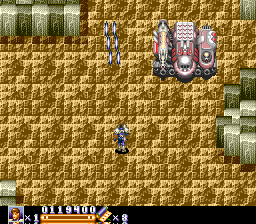 Micro Cabin’s PC Engine game Mystic Formula is one of those games that shows quite a bit of promise. It’s a run-and-gun that takes place in a cool world that’s sort of like a magic-filled anime version of the wild west. The character artwork, provided by animator Kunihiro Abe (many Gundam films), is bright and attractive, definitely very early 90s in style. And it’s a two-player overhead run-and-gun, a genre that’s pretty rare on the PC Engine. So it’s a shame that it flubs almost everything pretty badly. 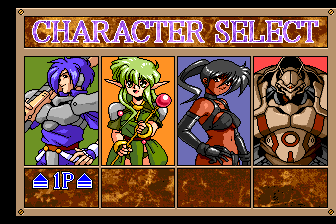 The story is focused on a group of treasure hunters who are sent on a wild goose chase across the land to find something that could potentially catapult them to great wealth. There are four heroes in the troupe – Raiden is the blue haired guy with a laser gun, while Phillia is an elf that wields flame magic. Stear is dressed in a warrior bikini and uses a wave attack, while Gaist is a hulking robot with explosive powers.

So while the introduction cinemas look pretty decent, as does the character select screen, once you start the action, you’re tossed into a game with tiny sprites set against an insane ugly background. 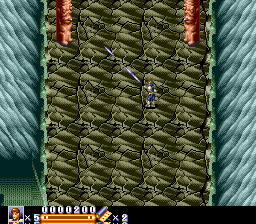 Mystic Formula isn’t just poor looking, it’s a game whose graphics are so haphazardly tossed together that they ascend to a mystical plane of bad art. The most obvious problem are the tiled floors, which are not only overdesigned, but so small that they resemble some particularly hideous wallpaper when laid across the levels. They’re the kind of visuals you can’t look at too long or too hard at, lest you get a headache. A few are so insanely constructed they accidentally look like one of those Magic Eye images, where you might stare at it for a few seconds and go cross eyed to pick out a hidden image. But nope, it’s just really bad looking. What’s particularly unusual about this is that this type of sloppiness could be seen fairly regularly in the 8-bit era, particularly in the early days of the Famicom, when graphic designers were still just figuring things out. But this game, released for the PC Engine Super CD in 1993, using 256 color graphics, should probably know better. 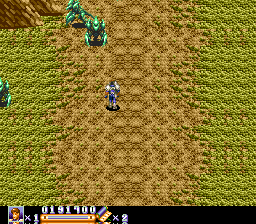 Compounding this problem is the level design, which consists primarily of straight corridors, large fields, and other wide-open areas. The stages do switch scrolling at certain points, moving from horizontal to vertical and vice versa, but a few sections are so badly constructed it’s not clearly signaled when you’re supposed to change, as the screen just stops scrolling, forcing you to move to the other direction. There’s even an obvious graphical glitch which makes a shadow duplicate of your status bar right beneath it. Since it sits outside of the TV’s title safe area, the developers probably just assumed no one would see it and never bothered to fix it.

The character sprites are the least bad thing about it. They’re tiny, but it also seems like the artists were trying their best to cram as much detail as possible into the space they were allotted. The result is that they look like walking smudges. Some of the enemies fare quite a bit better, just because they’re larger, but they typically suffer from poor animation. One of the level bosses is a woman bandit in a mecha, and the design here actually looks pretty good. But during most of the battle, she just stands completely still as her mace swirls around the screen. The last boss looks great too, even if it is a rip-off of one of the main bosses from Super Contra, but that isn’t animated at all either. 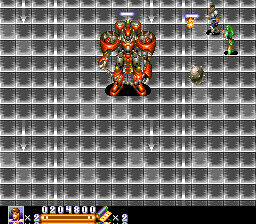 Curiously, even though the opening cinema is pretty decent, the rest of them…aren’t. Over the game’s nine levels, about half of them aren’t even animated at all, they’re just still frames of the gameplay with the character voices talking over them, with the sprites occasionally walking around a bit. In the case where there is a cinema, the visuals are often small and barely animated. The game has a high caliber voice acting cast, including Kazuki Yao, Mari Maruta, Chisa Yokoyama, Yayoi Jinguji, and Ryo Horikawa. If you picture that most of the budget went into hiring these guys, then the iffy quality of the rest of the game makes sense.

As far as the action goes, the tiny characters and boring levels make it so that the shooting just doesn’t feel like it has much impact. Your characters can shoot rapid fire by default (without even the switches on the PC Engine/TurboGrafx-16 controller), though your basic weapons are short-ranged. However, if you lay off the fire, you can charge it up and shoot a more powerful attack. But it takes three full seconds to gain the energy to pull this off, so usually you’ll do more damage if you just get close and blast away as fast as possible. There are power-ups that increase the strength of the default attack, plus you have a number of screen-clearing scrolls at your disposal. The “Option” power-up will summon one of the other characters to fight alongside you and shadow your movements, a good way to bring the other characters into the fray if you’re not playing multiplayer.

There are a couple of levels where you hop onto some kind of motorcycle for some shoot-em-up action. These sections are dreadful, but at least they’re brief. Near the end of the game, you have to take down a gigantic battleship, but you just sorta fly up alongside it, take out a hangar on its wing, and then the whole thing goes down? Pretty anticlimactic, that. There is one mecha type that you can actually commandeer, which lets you fly around and shoot other enemies, which is mostly noteable since it’s so much larger than your regular character sprite.

The game’s saving grace is that you can use the “I” button on the controller to lock your character’s firing in a certain direction, allowing them to strafe. This convenience does help make the game manageable, and the barren level layouts actually sorta work in the game’s favor, since there’s a wide area to move around. Some enemies pop out and attack suddenly, but their movements are also predictable, so once you get into the groove of things, it isn’t too overwhelmingly difficult. The core action is just enjoyable enough that it elevates the game from being junk to being just barely passable. 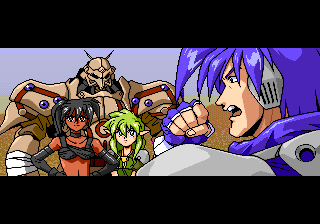 Mystic Formula is indicative of the trend where games tried to sell themselves on the strengths of their anime artwork while just barely putting any effort into the games themselves. Telenet was guilty of this regularly, but at least their games tended to have some semblance of ropey fun about them, where Mystic Formula just putters along at the bare minimum level of competency. And while two-player simultaneous games are rare, it’s hard to imagine anyone would want to play this over much better, earlier TurboGrafx-16 titles like Bloody Wolf. It’s the sort of game that people probably might want to like, given its character designs and cool setting, which is enough to earn it a little bit of appreciation in spite of itself. As such, getting a copy of the CD is a bit pricey, but certainly not near the upper echelon of PC Engine games.