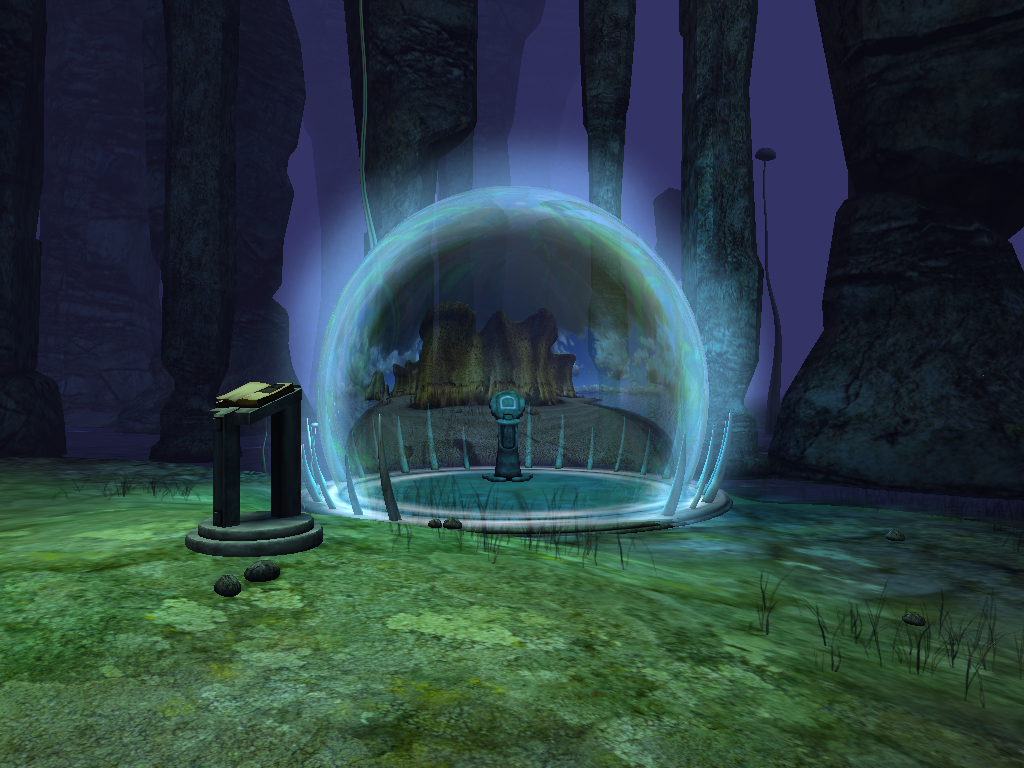 After two quasi-successful attempts by third party companies at replicating the Myst formula, it was time for Cyan to get back behind the wheel again. As its name implies, End of Ages was meant as the final entry in the series – after the failure of Uru, it was decided to produce the franchise’s curtain call. In fact, End of Ages is actually made up of unused concepts meant for Uru and you can also spot that some assets were taken straight from it as well. On the other hand, that doesn’t meant they skimped on the original content. Most puzzles are solved through the new mechanic of drawing on special tablets and you can finally meet and interact with the Bahro, creatures that were hinted at in Uru, but rarely seen.

Mere seconds after booting up the game, End of Ages feels like coming back home. It is in part the locales – the game starts out in the same room where the first Myst ends and Riven begins. Shortly after, you are transported to the inside of the crater that you see in the desert at the beginning of Uru but can never reach. That crater is in fact the entrance (or rather, the exit) of the Great Shaft, a tunnel built by the D’ni that links the surface of the Earth with their underground world. It’s a place of significant importance to the Myst universe and is one of the central areas of the Book of Ti’ana novel. However, the feeling is not just in the places – it is in the art design in general. Jack Wall has been replaced by Tim Larkin as music designer and the latter delivers a much more atmospheric score. The buildings once again sport that unique blend of tribal architecture and steampunk stonework that is the style of the imaginary D’ni civilization. The game boasts some of the best texture work out there. It’s in the skies, the caves, the clothes, the architectural details, everywhere. 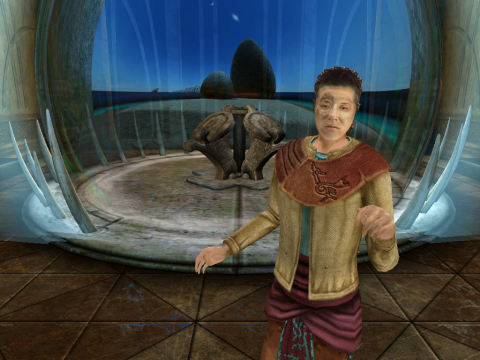 The story in End of Ages is even more barebones than usual. You just pop into existence, touch a stone tablet and then Yeesha shows up and gives you a speech as well as the quest to restore the tablet by touching others like it in the game’s four main ages. There’s also something in there about freeing the Bahro from enslavement, a species of monkey-like creatures with the innate ability to link. They play a pretty large part in the plot of Uru and are fairly significant here too. Anybody that isn’t on the side of the liberation of the Bahro will obviously turn out to be utterly evil under the surface. Boy, black and white morality sure is fantastic. Also, slaves of what? There doesn’t seem to be too many slave drivers around – everybody’s dead!

The other main character of the game is Esher, a D’ni survivor played by David Ogden Stiers. He does an excellent acting job, although some fans say that his D’ni accent in not authentic, whatever that means. What is more notable, however, is that he pronounces “D’ni” as “duck knee”. Esher shows up quite a lot in the game, many times per area. That doesn’t make End of Ages a verbose game, but it’s still more than the other games, Revelation excluded. The people at Cyan decided that End of Ages needed a bit more character interaction to give a better sense of the setting for new players. Esher is also meant to hold your hand through the puzzles, so he gives out hints as well. It’s a good thing that Cyan’s definition of “holding your hand” is telling you things that you don’t quite know if they’re supposed to be hints and advice like “this place is different” or “the door is locked but you can find another way around”. 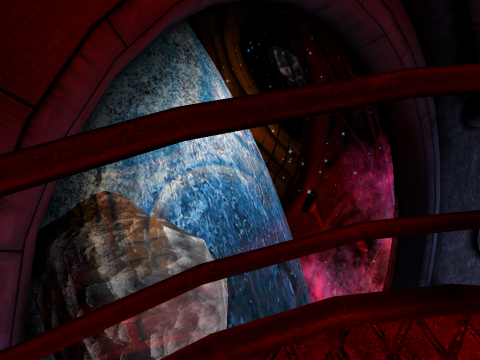 End of Ages is supposed to be set some 200 years after the other four games, sometime around the present day. It’s after the events of Uru, and Yeesha gives subtle hints in her journal that the DRC (D’ni Restoration Council)’s efforts to revive the D’ni civilization have failed. She must mean this both in the context of the game’s story and outside of it, since Uru was a commercial failure. That could explain why End of Ages has a certain tinge of bitterness to it. Strangely, the characters seem to recognize you as the same person in every game despite the fact that they are now hundreds of years apart. Are you D’ni? Are you a time-traveler? Or an immortal? Maybe you’re the Wandering Jew? Here’s another mystery for you to ponder.

Much like Uru, Myst V is completely in 3D, except that navigation is exclusively first-person. End of Ages offers a control scheme to please everybody: frame by frame like Myst and Riven, sphere by sphere like Exile and Revelation or full 3D movement like realMyst and Uru. All modes work very well, but it’s hard to use something else once you’re given the option to move freely. The cursor actually goes back to being a simple and efficient 2D hand, but retains the upgrade of reacting when flying over a hotspot. So it’s the best of both worlds.

There is no more FMV in End of Ages, as all character interactions are handled through polygonal models. The characters’ movements are actually really fluid and natural. The face texture is obtained by filming the real actor and then putting it on a polygonal model, similar to the technique used in the Siren games for the PlayStation 2. It works, but it’s also a bit creepy. 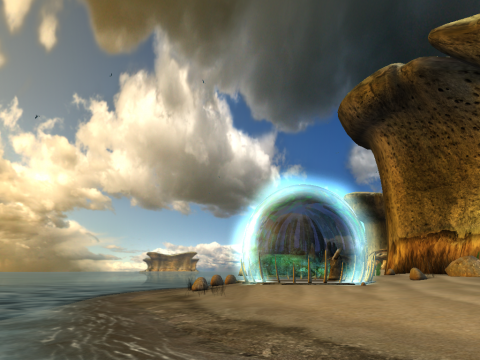 The puzzles in End of Ages use a new mechanic – Bahro stone slates. Basically, they work like this – you draw on them with the mouse, drop the slate to the ground and a Bahro will pick it up and react if the correct symbol is drawn. Each age hides symbols that act as checkpoints. Drawing those allows you to reach areas you couldn’t otherwise, pretty much like how Journeys work in Uru. Each of the four main ages also has one special symbol that affect the environment, much like a magic spell… those Bahro can pull some fancy tricks that you’ll have to discover by yourself.

There are four primary ages this time around, not including Direbo, a tiny age serving as a shortcut connecting the other ones. Taghira is a prison built on icebergs and the first main age. Criminals were sent there and left to fend off on their own. You can see some of the structures they built to take advantage of thermal currents and bulbous trees also survive thanks to the heat. The puzzles here are really simple, as the ages are placed in ascending order of difficulty. 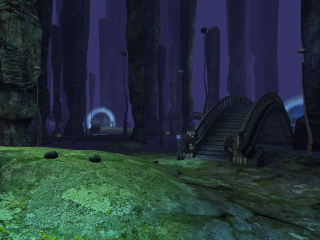 A tiny age serving as a shortcut connecting the other ones. It’s purple! 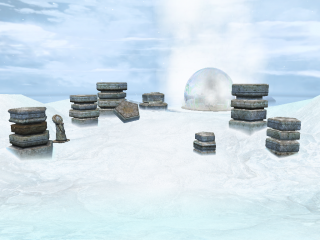 A prison built on icebergs and the first main age. Criminals were sent there and left to fend off on their own. You can see some of the structures they built to take advantage of thermal currents and bulbous trees also survive thanks to the heat. The puzzles here are really simple, as the ages are placed in ascending order of difficulty. 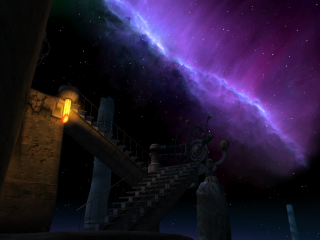 An age under a perpetual starry sky designed as the perfect spot for an observatory. You’ll need to use telescopes to locate things around the area. The final part of this age is quite a surprise… 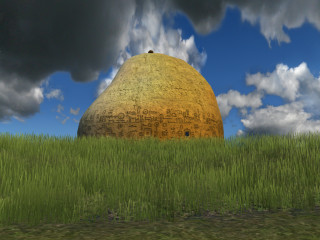 A beach island with a grassy plateau and a weird egg structure in the middle. A vanilla sky can be seen above, probably one of the most stunning skies I’ve seen in a game. The island is surrounded by what sounds like Northern Gannets, nesting and flying around. The only real challenge here is finding your way into the egg hut, but it’s the most difficult puzzle in Myst V. 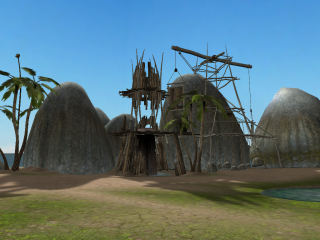 A tropical island used as an arena where humans fight large sea creatures for sport. The sky here is deceptive… a solid block of blue after so many great skies in every age? Right when you think Cyan dropped the ball, here it comes: Laki’ahn undergoes a showy eclipse every fifteen minutes or so. As the final age, Laki’ahn is also a bit longer than the other ones. 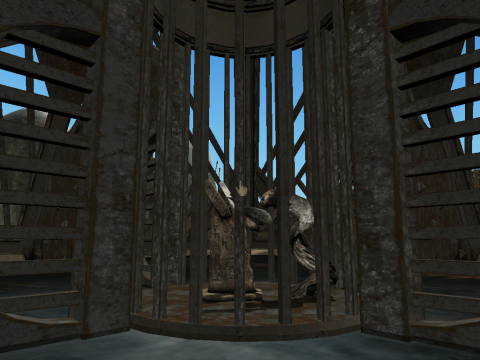 The puzzles in End of Ages are a bit simpler than those in its predecessors, but they aren’t especially easy either. There’s nothing in there as bad as the worse head scratchers in Uru or Riven. The only problem with the puzzles is that the drawing recognition is a bit, well, sketchy. You shouldn’t expect great precision from drawing recognition programs or great drawing skills from the average gamer, but there are still some major bugs. As an aside, it’s interesting to note that you can finish the game in a few minutes provided you know all the right symbols in advance. It’s similar to the first Myst in that respect

End of Ages is supposed to be about the player making an important choice deciding the ultimate fate of the D’ni (says right there on the box: “Decide the fate of a civilization”). Who knows how they came to that statement. End of Ages is like all the other Myst games – one good ending and a few bad ones that punish your stupidity. It’s strange how they can pretend that this game somehow offers a more interesting or more important choice at the end. All of the endings are a bit sappy and awkward. They tried to give the series a definite conclusion in a few minutes of dialogue so the whole thing comes across as forced. You’re asked to perform an action that has incredible consequences, but you’ve never been told what those are exactly and haven’t been given reasons to care much either way. You’re supposed to be righting hundreds of years of wrongs in one gesture, so that also comes out extremely forced as well. What those wrongs were is very vaguely alluded to in Yeesha’s journals and might not be obvious even if you’ve played the earlier games, since Myst has always been stingy about storyline details. It’s very hard to consider End of Ages the ending point of anything, especially since the series’ motto is “the ending has not yet been written”. 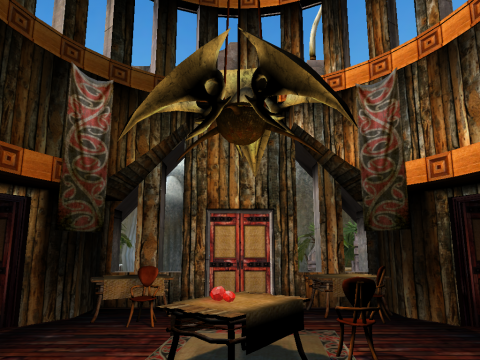 However, one of the perks of finishing the game is that you get to return to Myst Island. The age has become a dilapidated dump since your last passage there, but it’s still cool to revisit it, especially under a different light. Unlike the spoof in Pyst, Myst Island doesn’t become a pile of ruins because it was trampled to death by tourists, but because it was completely forgotten over the years. Myst went from a place full of unassuming mystery to an abandoned wasteland, a progression that reflects Cyan’s unfortunate fate as a company. It’s certainly a lot more interesting than Yeesha’s nonsense speech about curses being lifted, kingdoms being earned and shackles freed from. The sad fate of Myst Island reveals much more about the franchise and says it in a manner befitting Cyan’s storytelling specialty – without uttering a single word.