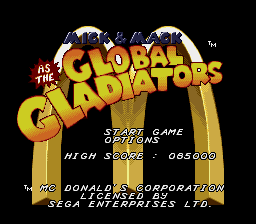 Global Gladiators shares the same license, same developer, same characters, and even the same overall genre as MC Kids. And yet, the two games almost couldn’t be more different. To be frank, even despite the difference in hardware, MC Kids is the clear winner of the two, and has much more on offer. Global Gladiators, on the other hand, is plainly mediocre in just about every respect. Not even bad enough to intrigue anybody looking for such a thing, it’s competent, but can’t claim much more than that.

Mick & Mack, two cool 90s kids, are hanging out at McDonald’s and reading a comic book. When one of the kids expresses that it’d be fun to be one of the characters in the comic book, Ronald McDonald appears from nowhere and magics them inside. Presumably, they’ll be left to die in there until they please the clown enough to be granted their freedom. The game also has a thick environmentalist message, where pollution is presented as bad and recycling as good. The irony, considering the game’s license, should hopefully be obvious. 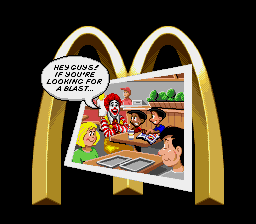 It’s a surprisingly gritty looking game, at least in the beginning. The slime world you start in features the bones of dead creatures scattered across the landscape, and lightning continually strikes in the background. You’re greeted with an intense rock track, as best the GEMS software can offer it. After the slime world, the game lightens up somewhat, but it makes for a rather striking first impression. You never even see any of the other McDonald’s friends, and Ronald himself is only seen during the cutscenes and at the end of levels. 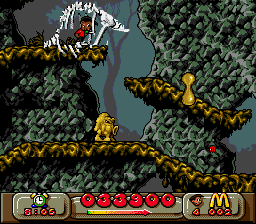 Whichever kid you choose, the gameplay remains the same. In each level, you’ll scour the map, looking for miniature golden arches to collect. Once you’ve found at least thirty, Ronald will appear at the other end of the map, and you’ll need to reach him to finish the stage. Finding enough arches is usually never especially difficult, since every stage has a hundred total. Generally, you can hang around near the beginning of the stage, grab just enough arches to hit your quota, and then make a beeline for the exit. Spending much more effort than that is generally never necessary, unless you’re in dire need of powerups. 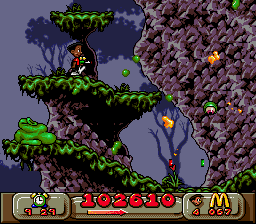 The main difficulty you’ll face is that every level is crammed with enemies on just about every screen. Your kid comes equipped with a water gun that shoots out a strange orange goo in arc, and one or two hits from this is enough to dispatch almost any enemy. The real danger enemies present are just how many of them there are, to the point where it’s almost impossible to avoid running into them. While contact will kill your foes, it’ll also drain your health, forcing you to make a detour to replenish it. Most dangerous of all are enemies who shoot projectiles, since they can quickly chip down your health before you get in range to blast them. 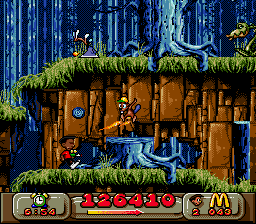 That’s really all there is to the game, once you boil it down. Grab enough arches to hit the bare minimum, and then run forward while mashing down the fire button, only breaking off from that plan if you’re in danger of losing health. The game only occasionally does so much as put a wall in your direct path, forcing you to take a small curve to get to your goal. Beyond that, the only real complications in the level design are bottomless pits and death spikes that you’ll need to steer clear of. There’s only a single boss fight at the end of the game, and even that isn’t threatening unless you accidentally fall into a pit during the battle. 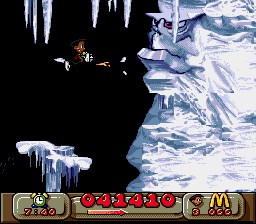 It’s not spoilers if they put it on the back of the box.

If you really scour the levels and collect 75 arches, however, you’ll unlock a bonus level. This is a fun distraction where you grab trash that falls from the sky and have to toss it into one of the three appropriate bins. Should any trash remain on the ground for too long, or you get hit with an anvil, the bonus stage ends. Last long enough, however, and you’ll eventually be able to grab a 1-up or a continue that’ll float downwards. Generally, however, unless you’re really desperate for another life, the extra time and effort it takes to even earn the chance at the bonus isn’t worth it. 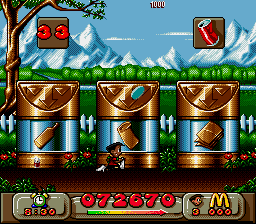 Each of the four worlds at least looks unique from one another, with some well drawn tiles making up the map themselves. Aside from minor changes in pallete, however, each of a world’s three levels generally look identical to one another. In typical Virgin fashion, it’s the animation that’s the real highlight, with the kids getting a sizeable amount of frames. There’s some cute touches, like their gum-chewing idle animation, or the way they’ll look below their feet in confusion when you stand on an invisible platform. It’s not much, but it’s the best thing the game has on offer. 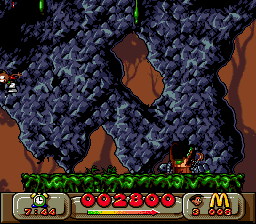 The music, composed by Tommy Tallarico, also helps make things somewhat less bland. While it uses the GEMS software heard in many a western Genesis game, it stands apart through its heavy use of sampling. The game also uses plenty of digitized samples for its sound effects, which helps add some goofy charm to the proceedings. The particular highlight has to be the song for the bonus level, a high-intensity techno track that goes well with the frantic pace the bonus stage builds up to.

In the end, while it’s got a nice presentation, there’s really not much to recommend about Global Gladiators. It’s competent, and doesn’t do anything wrong, but in terms of gameplay, it offers nothing more than the bare minimum. Compared to something like MC Kids, which could rival Mario 3 in terms of scope and complexity, it’s a rather large backwards step. Sadly, according to the developers of that game, it seemed like management tended to favor Global Gladiators when it came to marketing. One could blame the waning popularity of the NES on this, but it still means a superior game ended up getting overshadowed.

The Master System version features totally redrawn art, most notable being the entirely different tilesets later stages have. It also changes the health bar to your kid’s facial expression, which makes judging how many hits you have somewhat more difficult. On the gameplay end, the number of arches you have to collect before you can exit now varies by level, with late stages asking for as many as 75. This particular port features a much choppier framerate, more sluggish controls, and floaty jumps that make precision platforming difficult, so this addition does not increase the fun. The Game Gear version is similar, but the smaller screen adds even more enjoyment.

The Amiga version is fairly similar to the original Genesis release, with a few cuts that hold it back. Most notably, you now have to press up to jump, which removes your ability to shoot your goo arc upwards. There are times when this can be an annoyance when you’re trying to hit enemies above you. The framerate is also far less smooth, which isn’t as much of a problem, but still feels rather noticeable. There’s some graphical cuts as well, such as the removal of all backgrounds in favor of a rainbow gradient that the Amiga was well known for. The music has also been redone entirely in a .mod format, which gives it a very different, if not necessarily superior sound. It’s a serviceable port, but not one that would be worth ditching the Sega version for.

The NES version was never released, but can be found in prototype form. While it’s not entirely finished, what’s there is surprisingly good. The animation still carries a lot of the original version’s smoothness, and the controls feel somewhat tighter. There are somewhat fewer enemies around, with foes taking more hits to kill to compensate. There’s also no music in the latest prototype that can be found. Aside from that, the only real flaw is the bright orange color that’s used as a background at all times.

The Game Boy version can also only be found in prototype form. Right from the start, attention has to be drawn to the main character sprite, which is almost entirely unrecognizable from any of the other versions. Unfortunately, that’s far from the only issue, as this version features some of the most uncomfortable jumping controls you may see in any platformer. Your upward ascent is extremely floaty, where descending even from a straight jump takes what feels like several seconds. Combined with the fact that jumps give you almost no horizontal movement, trying to play this version seriously quickly becomes impossible. It’s hard to tell if this would have been fixed in a later release, as aside from the controls, it feels functionally complete.

The Super Nintendo version, just like the other Nintendo versions, is only a prototype. This version features some graphical polish not seen in the Genesis version, like a larger color pallete, interstitial screens between levels, and extra details in the levels like water-spewing stone heads. For some reason, you now also collect tokens with the Virgin logo on them, although the arches still make appearances as the occasional collectible. The music, however, pales in comparison to the original version, and sounds like it’s playing off in a far off room with an echo. Unfortunately, this is the least complete of the unreleased versions, with enemies who can never harm you and levels that never spawn an exit. 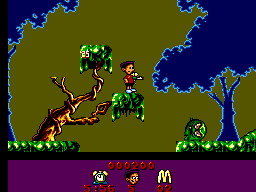 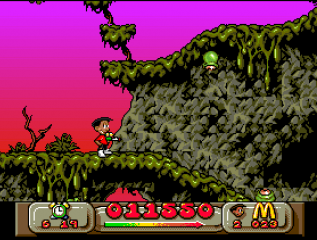 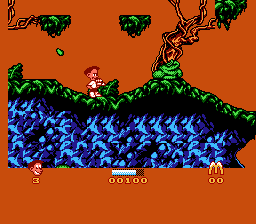 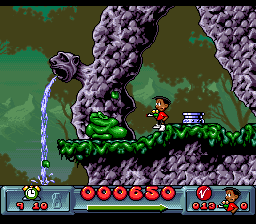