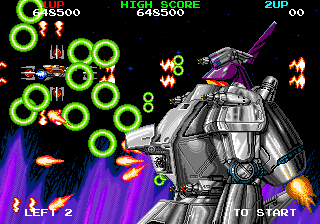 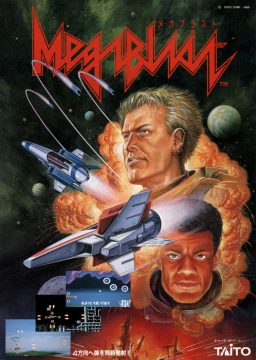 Taito’s arcade shooter Megablast is entirely unrelated to the European computer/SMS shooter Xenon 2: Megablast. At first glance, it looks a lot like other Taito shooters, particularly Darius, with two main distinctions. Firstly, it only uses a single screen. Secondly, the main gimmick is that your ship is surrounded by stationary pods, which fire lasers simultaneously in all four directions.

There’s not really a whole lot to get enthused about in this game. While other games use pods or options to do interesting things, Megablast doesn’t. They can’t be rotated, they can’t be detached, they can’t absorb enemy fire. They are powered up individually, so you can equip different weapons on different pods, but weapon orbs are so scarce that it hardly matters. Being able to shoot in all directions at all times makes your ship a little too versatile. Many enemies take a few hits to kill so you’re not completed overpowered. While the screen typically scrolls from left to right, in a few cases the scrolling while change directions, so that extra versatility does come in handy. The Japanese manual suggests that the game may originally have been developed to use four buttons instead of one, each firing in different directions, but this was changed before the final release. 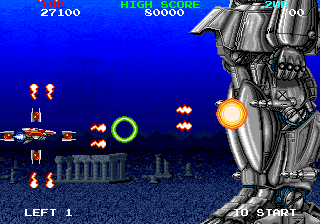 Ultimately it wouldn’t have mattered, because Megablast is really humdrum. The visuals seem like boring leftovers from Darius II. The pace is slow and plodding, lacking either the varied weaponry or style of other Taito shooters.

Despite being fairly dull, there are still a few interesting aspects about the game. For example, the storyline is absolutely insane. Taking place at the end of the 21st century, mankind has completely eliminated war and hunger. Except one small problem remains – the female population keeps disappearing! A team called “Defending-the-Earth-From-Outside-Organization” launches an investigation and determines that aliens from the planet Zancs have been coming to Earth and stealing all of the ladies. Apparently a disease rendered all of their women sterile, and Earth women just happened to be genetically compatible. Two heroes, Downson and Bogey, take off to rescue them. One of them also has a personal stake in the mission, given that their girlfriend, Sindy, was kidnapped as well. This plotline is related via a long, mostly incoherent rambling during the game demo, written entirely in “English” even in the Japanese version. What’s actually incredibly disappointing is that the setup doesn’t affect the game at all nor is it mentioned anywhere else in the game. There are no cutscenes of kidnapped women, nor anything to suggest that this whole thing was just a goofy B-movie setup tacked on to an otherwise incredibly generic game. How lame.

The music, at least, is pretty alright. It was one of the early composed by Yasuhisa Watanabe, one of Zuntata’s most talented musicians. It’s not as good as his other soundtracks, or even other Taito shooters, but it’s not too bad. The demo and ending both uses pieces of classical music, for reasons that are not entirely clear. 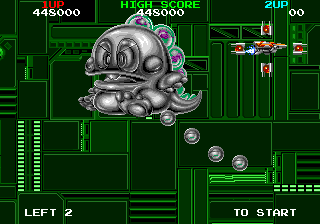 There are some interesting boss designs too. The first level boss is gigantic mecha, though you only see its lower half before it runs off. It’s not until the end of the game that you get to fight the whole thing. Additionally, all of the mid-bosses are based on characters from other Taito games. These include the light cycle Organizer from Raimais, Doh (the Moai head) from Arkanoid, Chakkun from Chack ‘n Pop, and Bub from Bubble Bobble. At least it gives some personality to the game.

Megablast was a resounding flop, and was not ported during its initial release period. It did end up on the PlayStation 2 on the Taito Memories 2 Gekan pack, which consisted mostly of lesser Taito games shoveled together.

In the Hunt
Night mode