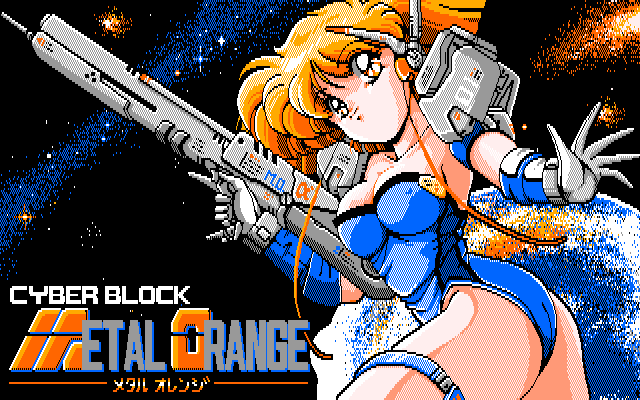 This review was originally featured in Indiepocalypse #7. Please check them out! 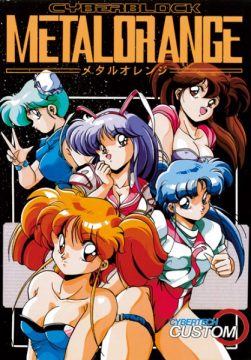 Cyberblock Metal Orange is a brick-breaker, much in the vein of Atari’s Breakout or Taito’s Arkanoid, but it sets itself apart with a few key distinctions. First off, it’s filled with cute anime girls – your little ball-bouncing battleship is piloted by a girl named Chip, the mascot for the game’s developer, Custom. Each set of levels stars one of five girls, who loses bits of their clothing as you continue to beat each stage. The illustrations were provided by adult manga artist Yanagi Hirohiko. 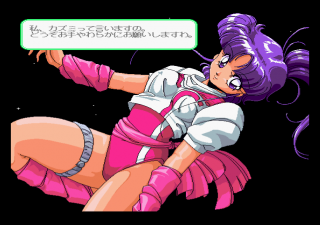 But the game isn’t just a lazy pretext for porn, as it’s actually fairly inventive. The power-up system is stolen, more or less, from Konami’s Gradius shoot-em-up series. Whenever you break certain bricks, colored icons will pop out, and will increase your power meter by one increment. Depending on how full it is, you can choose from a variety of enhancements, including increasing your speed, expanding the width of your paddle, activating multi-ball, creating a barrier at the bottom of the screen, or summoning a “giga ball” that can tear through most blocks instead of bouncing off them. This level of customization makes the game flow much easier, since you’re not at the mercy of whatever the stage designers had granted you. The ability to save your progress to the game disk is also nice, and it keeps your high scores too.

It also has an absolutely fantastic soundtrack, with the sound team consisting of three musicians, including Hitoshi Sakimoto and Masaharu Iwata. They’re internationally known for their work on Quest/Square games like Tactics Ogre and Final Fantasy Tactics, but before they crafted their signature orchestral style, they were gods of FM synth, and their talents are perfectly highlighted here. All of these aspects come together to create one of the best games of its kind, and help earn Custom the reputation of a cult developer. 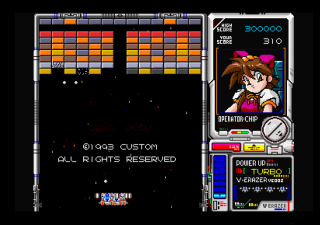 After the initial PC88/PC98 release, a later version for the X68000 was released, with an “EX” subtitle, which includes higher resolution visuals, improved music and support for analog control. Custom was only in business for a few years in the early 90s, with their other games being Carat, a puzzle game; Teen, an adventure game; Star Platinum, a mahjong title; and Chip-chan Kick, their sole console game, released on the PC-FX, which is a Bubble Bobble-style game featuring their mascot.