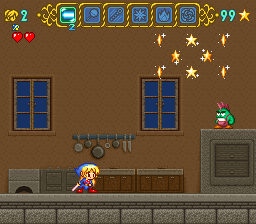 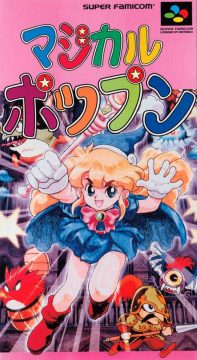 Magical Pop’n is one of the best lesser-known Super Nintendo platform games. This would be quite a feat in itself, given that the SNES was home to hundreds of colorful fantasy platformers. It becomes even more impressive when you learn that it was made by a short-lived company, Polestar, which is not really known for anything else. And none of their few other titles was another platformer, either! Despite this, it fared quite poorly in its home country of Japan, being met with indifference and middling reviews in gaming publications. One of the reasons why the game was never ported and became a rarity, fetching ridiculously high prices on auction sites.

The plot is typical of this kind of games: the fantasy kingdom of To’ahl gets attacked by the usual dark lord and his army of creatures, they steal the gem that grants powers to the kingdom, and its unnamed princess, only armed with a sword and her trusty magical wand, immediately storms off the castle to punish the evildoers. All of this is told through a very cute early 90s anime-style slideshow. 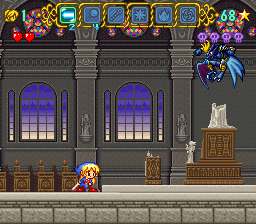 The adventure starts immediately after the end of the cinema, with the princess exploring the surroundings of the castle on a stormy night, namely the houses of the town around it, using beds as makeshift trampolines and so on. In one room of these a mid-boss suddenly pops up: a wizard who uses his magic to make furniture float. After defeating him, the princess passes through some more houses and the sewers/dungeons below the town to find the first of several magic spells, until she emerges at sunrise and comes to a church, where the statue inside shatters to reveal a winged demon who is the main stage boss. And this is just the first level! The next levels (a forest, a canyon, a magical ice palace in the clouds, another palace and finally the maze-like castle of the dark lord) aren’t as elaborate, but each one gets trickier than the last with more traps, timed puzzles, hidden routes and other standard platform obstacles. However, it never gets overwhelming, also thanks to the many life-restoring candies and cakes scattered everywhere. There are infinite continues, but no passwords or save states, so you’ll still have to complete the whole game in one setting.

The princess is quite adept at using her sword, even stabbing upwards and using it as a pogo stick to skewer enemies from above. However, as mentioned above, the crux of the gameplay is the princess’ magic spells: she starts with a standard beam and can find a new power in each level, and use them by consuming a certain amount of mana, represented by golden stars. These are easy to come across, by defeating enemies, inside treasure chests or just lying in the open. Among the spells there is a grappling chain thing that can be used without consuming stars, in order to cross chasms and such. The other powers are mostly offensive magic (grenades, flames and ice), but there’s also a Sonic-esque spinning move that can be used to climb on walls found late in the game. All spells also have a secondary more powerful attack mode that costs many more stars, covers a good portion of the screen and that can be activated by pressing Select after highlighting them in the bar. However, these “smart bombs” are barely ever useful and feel like overkill on the princess’ (and the designers’) part. 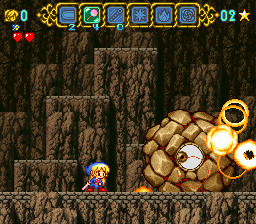 The interesting thing is that the levels have plenty of areas where the powers are required to proceed or discover branching paths with hidden bonuses; sometimes they are obvious (fire melts ice, the walls adorned with the grenade symbol are destructible), other times a bit of backtracking and keen eye is required. For example, one room has some braziers with fire in it and one without, and after having found the fire magic you can go back and light it up to open a secret door. This gives the game a nice feel of exploration, as opposed to most titles of this kind that are almost completely linear, but it goes a bit overboard in the last maze-like level that has a confusing layout. Another slight problem is that it takes a while to get used to how the grappling chain works: it feels like the timing necessary to jump, latch onto the hooks and jump off of them is a bit off at times. Because of this, the mid-boss who escapes from you, has a force field and forces you to constantly jump between two hooks comes off as the most annoying part in the whole game. Other than that, though, the game has a great flow and is very easy to pick up and play.

The art style and character design flip-flops between being cute and serious: the anime-styled intro is sweet and charming, and several enemy creatures are typical of cutesy platformers such as puppet-like soldiers, gnomes, bunnies, bouncing jellies and penguins. But we also have to fight things like angry ogres, floating masked mages, eight-armed Hindu-like statues and stretchy humanoids that look like desiccated corpses. The same can be said for the various mid-bosses and bosses, going from goofy beings like a flying fruit with a face and a mustachioed snowman, to a floating stone head with three scowling faces and a skull surrounded by a ring of other skulls. In this regard it reminds a bit of the Cotton series, similarly uncertain on whether it wanted to look dark or cutesy. 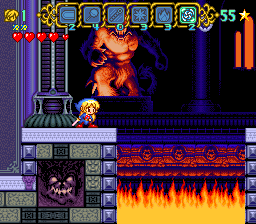 In general the graphics are fairly detailed, with a few effects like the image distortion caused by the heat in certain areas and, most notably, multiple parallax levels. The use of colors is pretty good and makes the game look almost like a PC Engine title, not to mention that everything feels fluid and well-animated, with only a few slowdowns near the end of the adventure. The princess is quite expressive with her various animations and several enemies too have multiple animation frames. The voice acting, a rarity for the time, also helps to make her an endearing character and the vocal samples, despite being linked to pretty much every action she takes, rarely become annoying. 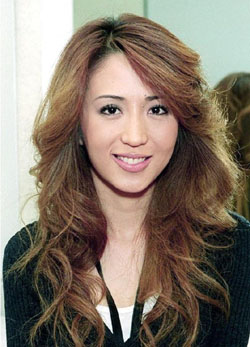 Some trivia about the princess’ voice: it was provided by Ai Iijima, a Japanese TV personality and “talent” who was a quite unusual choice for such a whimsical title. Iijima had a rough personal life that led her to become a pornographic actress, and she later managed to cross over to mainstream films and television shows. She also released some music, published an autobiography that managed to sell lots of copies and became an AIDS awareness activist. Sadly, she passed away because of an illness at only 36, so Magical Pop’n and another game are the only video games she lent her voice to. Her popularity in the nineties however did not help the game’s sales in any way, as stated in the beginning. Too bad because, all in all, this is a quite good (if now overpriced) title.