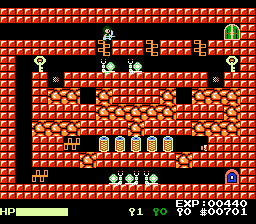 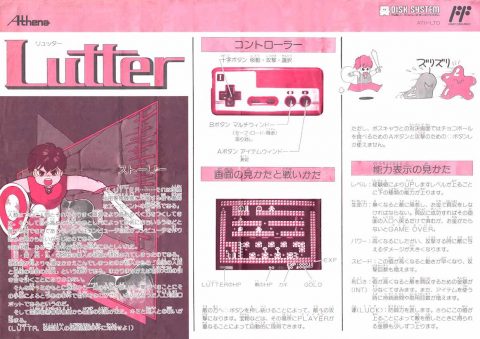 Lutter is a side-scrolling action-RPG from Athena, distributed solely through disk-writer systems near the end of 1989. It’s similar to some of the open-ended puzzle platformers that were popular on the MSX in the mid-80s, particularly ASCII Corporation’s The Castle. (Its sequel, The Castle Excellent, was localized for the NES under the name Castlequest). However, it differentiates itself in two ways: it ditches most of the puzzle solving in favor of RPG elements (emphasizing combat and level gaining), and it takes some elements from the classic Lode Runner. 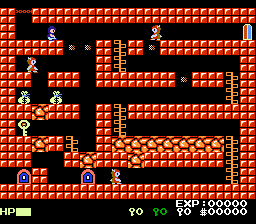 In this game, you control the eponymous Lutter as you explore a gigantic maze consisting of several screens. Each screen is constructed of ladders, blocks, moving platforms, over-hanging chains, and other obstacles. Most also have brown blocks of dirt, some of which appear and reappear, allowing characters to fall through. Fundamentally, the game is about looking for keys (necessary to unlock doors) and other items that will help navigation, including ladders and blocks that you can place yourself in order to reach otherwise inaccessible areas. Each screen is also filled with infinitely respawning enemies. Like many old RPGs, combat is handled simply by running into them, with the damage dealt and received based upon numerical comparisons, though attacking from above seems to get you an advantage. Even though you can’t avoid receiving damage, if you find a safe spot, you can stand still in order to regenerate health. Killing enemies will yield experience to increase your levels, and you can find gear to raise your stats.

Most of these types of games are obtuse and unforgiving, but Lutter is surprisingly approachable. You can save at any time, and dying will only cause you to restart at the beginning of the screen, costing you some gold. Even though the game is open-ended, and there’s no in-game map, the design is still straightforward and you probably won’t get too lost, even though most areas look identical. There are many warp doors, some of which are one-way and might send you completely out of the way, though the only thing you really lose from this is time. The “bump” combat system is a problem in boss battles, though most foes have a trick to beat them (related by various NPCs found throughout the maze), and taking along extra health curatives helps, too. 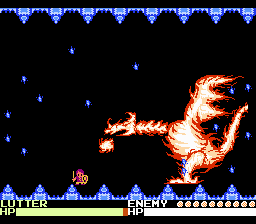 Overall, it’s not an attractive looking game, but Lutter is a unique blend of two types of genres that were popular in the 80s, distilled into a whole while eliminating most of their individual frustrations. It was a little old fashioned even at the time of release, but fans of these genres will find something that’s still quite playable today.