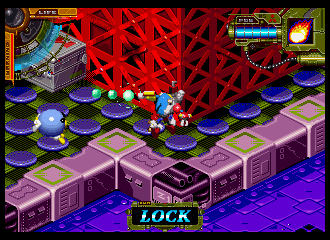 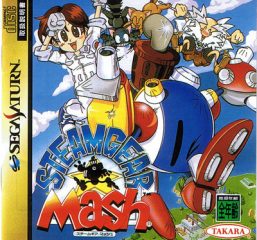 In mainstream video game discourse, the mid-90s are often seen as an awkward growing period for the medium. The introduction of 3D for console games meant developers not only had to figure out how to make their games look visually pleasing, but also how to translate older play styles into a completely different context. Although there is some truth to this sentiment, it overlooks the continuity in play styles before and after the introduction of 3D. Indeed, one could just as easily argue that those play styles matured and solidified during this period.

What makes Steamgear Mash interesting is how it represents both aspects of this era simultaneously. Being among the first games from Tamsoft (known for games like Battle Arena Toshinden, Senran Kagura, and Oneechanbara) and the first game Takara ever published, Steamgear Mash is a game defined by its era, for better or worse. On the one hand, the game’s careful navigation of a recent past and an impending present lends its aesthetic a vibrant sense of enjoyment that leaves a forceful impression. However, its failure to reconcile the two during play leaves players with a game that, while technically competent, lacks the sense of direction and cohesion of its peers. 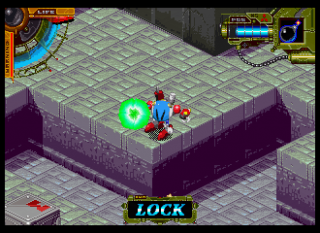 That Steamgear Mash is a product of its time is immediately clear from looking at it. The first thing one is likely to notice as they start the game is how much the characters resemble toys. They are painted uniformly with primary colors which are easy to read partially because of how little detail they convey. Likewise, the basic shapes that make up their bodies, in addition to heavily abstracting those bodies, create obvious joints and connections between body parts, like the characters were made of Lego. This is clearest with the titular Mash, whose body comprises several oblong orbs connected by cylinders.

The game is almost reminiscent of Sega’s Clockwork Knight in its artistic assumptions, and for very good reason. Both games faced similar technical constraints. Short of employing costly options like employing the most cutting edge technology or spending years developing the game, the designs like those in Steamgear Mash would have been the easiest for computers to render and thus the easiest for relatively small developers like Tamsoft to work with. Further exacerbating matters was the cultural perception of video games at the time: it was only just recently that games were starting to challenge the idea that they were children’s toys. However, the narrative premise makes the game’s project a little clearer. It begins with a scientist making a robotic friend for his daughter Mina. The two quickly become friends and enjoy every second that they spend together. Unbeknownst to them, they attract the attention of the emperor Gash, who watches them from afar and grows jealous of the affection they share. Hoping to have that same affection for himself, he steals Mina away, prompting Mash to embark on a journey to rescue her. 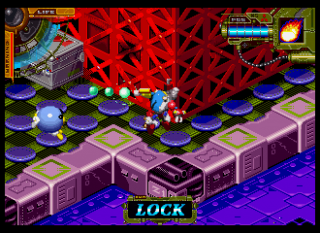 Despite its basic premise the game that follows from it is structured not around the inciting incident, but around Mina’s supposed outlook on the world as represented through Mash. Steamgear Mash is a game defined by childhood innocence. The world it depicts is one where emotions like joy and camaraderie are understood in very simple terms but felt all the more strongly for it. In its idealizing, the game presumes a naive innocence not only in the protagonists, but in all its characters. Conflict only ever arises from outside Mina and Mash’s relationship, and even then, Gash only acts out of a misguided desire for the friendship he sees in others. The music specifies these motifs even further. Between the boisterous melodies and the flamboyant instrumentation, Steamgear Mash actively celebrates this kind of childhood wonder.

Two things become quickly clear about Steamgear Mash. The most obvious is that the game heavily invokes ideas relating to childhood (toys, fairy tales, circuses, contemporary Japanese kids shows) and crafts its moods to match. However, those ideas are always mediated by the technological quirks and limitations that were present at the time, whether it’s CG imagery informing the visuals or the music heavily resembling music in early CD games. What these conclusions suggest is that, far from feeling limited by its constraints, the game openly acknowledges them and in fact embraces them, allowing them to inform its own project. Although its enthusiasm can be overbearing at times, and at others tinged with slight hints of bathos, the fact of its coming from a genuine place ensures its ability to work largely in the game’s favor. 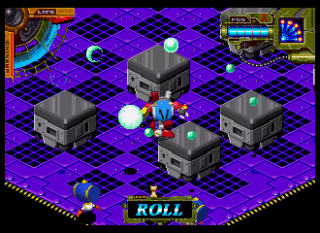 Yet for as well as this approach might serve the game aesthetically, the result is more uncertain where play is concerned. While Steamgear Mash may fashion itself a multi-genre game (according to the back of the box), aside from a handful of shoot-em-up levels, it’s more accurate to think of it as a straightforward action game. Players pilot Mash from an isometric perspective; using various weapons to kill the enemies he encounters and searching each level for the boss they need to defeat to advance.

In theory, this exploration element is the idea the game most strongly develops, as the progression through each level loosely models the Metroidvania genre. Especially early on, Mash must collect new weapons to explore previously inaccessible areas. In practice, though, this proves to be a very minor element of the game. Such items are few and far between, the construction of individual levels is always too basic to allow for the kind of sprawling exploration that typifies the genre, and the progression between levels precludes any possibility of revisiting earlier areas. Finally, Mash can find cats in certain levels who will follow him through the rest of the game. There are at least two, although it’s possible there are more hidden throughout the game.

At first glance, Steamgear Mash appears to be a technically proficient game. How weapons behave and how individual rooms are laid out suggest an appreciable level of consideration in the game’s design, helping it maintain a steady level of engagement consistent with the genre it presents itself as. Still, such a clinical description of the play experience is a sharp contrast to the previous warm yet passionate art style, suggesting that something about the former prevents it from reaching the same heights the latter revel in. And indeed, a closer analysis of Steamgear Mash shows the game struggling to find the exact sort of structure that will suit its needs. 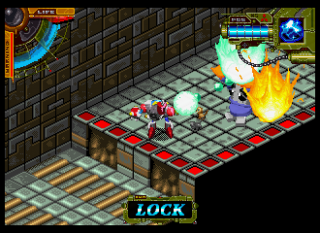 This is clearest when looking at the game’s use of isometric perspective. The first thing one is likely to notice upon starting the game is how expansive each room feels. This isn’t to say the rooms are actually all that large, technically speaking, as they’re actually quite delineated. But viewpointaffords a wide amount of space to the levels that other perspectives wouldn’t, and Mash’s diminutive stature ensures these spaces will feel large subjectively. They feel so large, in fact, that Steamgear Mash is often at a loss with what to do with all of it. Each room ends up a flat plane broken up by enemies, doorways, platforms, etc. However, this only results in play feeling disorienting, accidental, and apprehensive, as though you’re always stumbling across objects in the world and with little plan as to what to do with them.

Granted, this problem abates over time as the level layouts become more firmly defined, but the nature of isometry puts an equally firm limit on how much control the game is capable of exerting. More importantly, these issues point to more fundamental ones at the conceptual level. Steamgear Mash is a game with a burning desire to express something, but with no clear idea about what it should express, much less how it will go about expressing it. The lack of overt structure is a consequence of this problem, and sometimes, the game can use that lack to its advantage. In fact, this is where Steamgear Mash derives much of its zeal. Shooting in an isometric perspective lends itself especially well to chaotic situations. Bullets fly this way and that across the screen, sometimes even causing enemies to explode into energetic puffs of technicolor smoke. 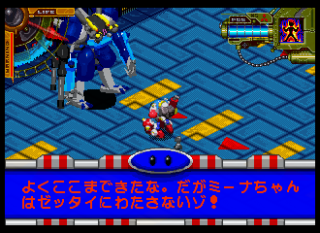 Again, though, only the visual and audio elements express this much energy. Play, meanwhile, needlessly splits its energy between two design approaches that, while capable of working well on their own, interfere with each other in practice and raise more questions than the game can hope to answer. For example, those visual and audio elements portray Steamgear Mash as wanting to be understood as a toy for small children, but approaching the game on these terms is a fruitless effort, as play doesn’t feel playful in the way that aesthetic suggests. There is nothing for the player to explore or discover for its own sake. Objects in this world are too simple to facilitate these actions, and are usually framed in terms of some very clear, very rigid function they are meant to serve.

Looking at the small handful of enthusiast publications that noticed the game outside Japan, opinions at the time of its release were somewhat positive but largely mixed. Most reviewers took issue with the isometric perspective (which they felt was overly frustrating) while praising its aesthetic. And this is where Steamgear Mash’s story ends. Although some people have learned about the game’s existence in recent years, outside a few YouTube reviews, it still remains a largely unknown game. It’s difficult to imagine this situation changing, at least when construing the game as an artistic work, but it may still have value as a historical object. The way it’s designed attests to the continuities between console generations, while that design’s shortcomings attest to the forces that threatened to disrupt them.