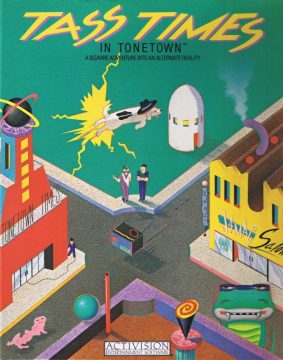 Tass Times in Tonetown was destined to become a cult classic. Set in a bizarre alternate universe rooted in 1980s pop culture, it stood out in a time when adventure games rarely strayed from the sturdy genres of fantasy, science fiction, and mystery. But it’s notable in other ways as well: with unusually detailed art and a fusion of cursor and text parser based gameplay, it occupies an intriguing intermediate step toward the fully graphic, mouse based adventures that would later develop. Above all, it’s a curiosity: a game written like a standard text adventure, but with a heavily visual emphasis.

The game’s setting is considerably more important than the plot, which thinly sets you on a mission to find your missing grandfather. Starting your search in his cabin, you quickly enter a portal into the upside-down world of Tonetown. There, a dog is a newspaper reporter, everyone dresses in garish 80s new wave clothing, and a sinister real estate tycoon/monstrous animal hybrid named Franklin Snarl is slowly terrorizing the town by setting up uncool housing developments.

As the first commercial software available for Apple’s IIgs, the game is built to the strengths of the hardware, and looks fantastic. The color palette is limited but bright, and the images for each scene are well drawn and peppered with small animations. With such a boldly imagined world, the only shame is that Tonetown quickly exhausts itself. The world that the game tries to create is intriguing but ultimately feels strangely empty. Once you’ve gone through the few buildings around town and interacted with the very scant amount of people and objects, you’re left to wander through the screens of generic wilderness that make up half of the game’s map. 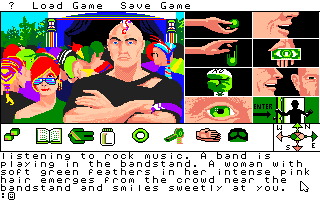 Unlike other early adventures with cursor based interfaces, Tass Times trades a clickable list of written action verbs for a fewer number of visual icons that represent actions. The 8 icons are easy to interpret- an eye for look, an open mouth for talk, etc. Clicking one and then a hotspot on the image automatically types and enters an action at the text parser. Unfortunately, most of the actions represented by icons have little use. Some, like tell me about, only have a few descriptions written for them throughout the entire game and require extra input at the text parser anyway, making them more trouble than they’re worth. The only truly useful action is look, which automatically occurs when clicking hotspots without previously clicking an action icon.

The mouse based gameplay is hit or miss, but a bigger issue is that the text parser takes up a paltry bottom quarter of the screen. Like a text adventure, a description of each scene occurs as you move from place to place, but since the text area is so small, there are often multiple pages of description go flip through. This gets old very quickly, making movement through the game feel like drudgery. In another weird design choice, hitting enter at an empty text parser removes the graphic elements, leaving just the text and parser. Since the text descriptions omits essential information, this leaves you playing blind. 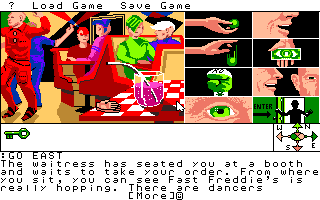 Tass Times further squashes the potential of the icon based section of the interface with awkward puzzle design. Some of the more simple puzzles are basic “verb object” type, doable with the mouse, but others rely heavily on figuring out what to type at the text parser. Because the game is written to play like a text adventure, players need to come up with wordy, unintuitive action combinations, like hit chain with zagtone or throw mushroom at eye. It also commits just about every irritating design choice of 80s adventure games. Adding everything in sight to your inventory is a necessity, but limited room means drop and retrieve missions inevitable. Hitting a dead end because you missed picking up an item in a place that’s no longer accessible is easy to do. You’re required to have certain objects to travel through some areas for no discernable reason. And certain sections of the game set you up in a situation where you only have a limited number of actions before missing a crucial item or a game over. There’s just not enough information given to the player to be able to solve these puzzles, making the whole affair feel very arbitrary.

Although notable for its treading new ground in a fledgling genre, from a modern perspective, Tass Times is a chore to play. Considered individually, the game design flaws are annoying, but added up over the course of the game, they feel egregious. As such, it’s more of a growing pain than a milestone in the evolution of the graphic adventure. 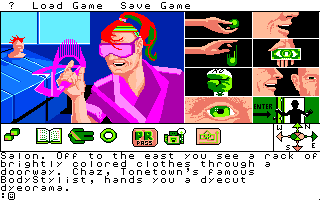 Tass Times in Tonetown was ported to the Amiga, Apple II, Atari ST, Commodore 64, and IBM PC. The Atari ST port is visually the most faithful, while the Amiga version uses slightly upscaled versions of the IIGS graphics with a marginally different color palette. The other ports have completely redrawn graphics that look terrible in comparison, but compensate with some extra animation. The sound is mostly identical across platforms, amounting to a short main theme song and a few sound effects.

Links:
Some of the images are taken from MobyGames and What is the Apple IIgs? 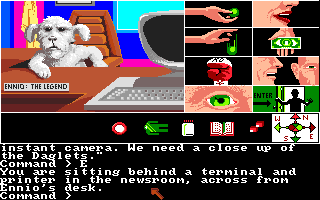 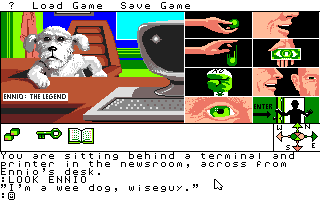 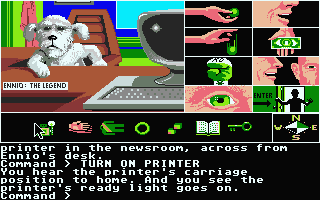 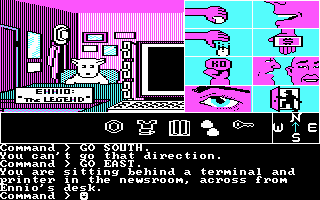 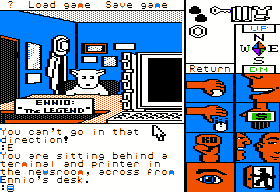 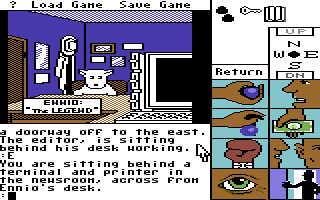