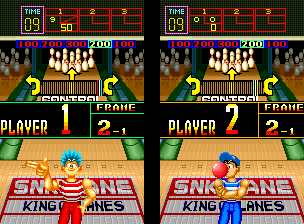 Ten-pin bowling is a popular pastime, with alleys all over the world, catering to adults and children alike. It’s easy to find, easy to play, and bowling alleys usually provide food, drinks, and places for families and friends to sit around and enjoy themselves while they compete with one another. Bowling alleys are also known for housing arcade games as well, and it’s not uncommon for classic titles to show up tucked away in side rooms. That being the case, how would bowling lend itself to an arcade experience if the two are already married in such a way?

That’s where SNK’s League Bowling comes into play. Released for the Neo Geo in its flagship year, 1990, League Bowling is one of the first arcade games about the sport. While Incredible Technologies developed Capcom Bowling two years prior in 1988, League is a much different— and more lively— take on bowling as a whole. The game was one of just three (alongside Riding Hero and Thrash Rally) to take advantage of the Neo Geo’s ability to link up with other MVS or AES cartridges, allowing four-player simultaneous action, although four-player alternating games can be played on a single setup. Players are treated to a small selection of game modes, consisting of “Regulation” (each player attempts to score 300 points), “Flash” (adds a randomized ‘Flash’ bonus for strikes from 100-500 points), and “Strike 90” (strikes give 90 points, spares give 60 points, and ‘field goals’ give 30 points); the entire game can be completed in roughly 10 minutes. 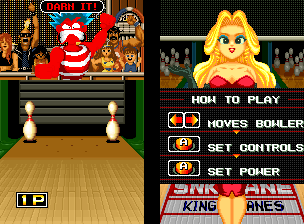 Despite most arcade bowling games being controlled with trackballs, League is unique in that it uses a traditional control stick with buttons, like all other Neo Geo games. Players can choose the handedness of their bowler, as well as the weight of their ball from eight to 15 pounds before playing; this affects the ease of control and the amount of speed they can put on the ball when rolling it (somewhat like a difficulty setting), as well as the colour. Gameplay consists of moving the bowler left and right, timing a slider to aim the ball, then stopping a power meter for the speed of the roll— unlike most bowling games, the ball doesn’t seem to react much to adding spin, often rolling straight or at an angle. Otherwise, the physics are solid despite the sprites sometimes clearly going through one another without connecting; that aside, the single-button, timing-based gameplay only serves to make the overall experience more accessible, as anyone can pick the game up and get strikes within minutes.

Although the gameplay is fairly straightforward and somewhat basic, the real appeal lies in the graphics and presentation. It’s obvious that SNK wanted to show off the power of the Neo Geo with this title, as the amount of colour and animation on quite large sprites for the time period is very impressive. The game has a distinctly-cartoony art style with exaggerated and lively characters, as well as plenty of bright palettes all the way through. The game screen is split vertically— with odd-numbered players on the left and even-numbered players on the right— so all the action can be seen at once, giving the game a sort-of chaotic look when a full match is being played. 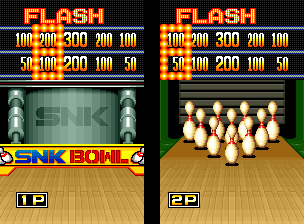 The player character, Pete, is a rather generic-looking guy wearing a striped shirt and a pair of jeans; all four players dress this way with different palettes; however, the second and fourth players wear baseball caps while the first and third players have bright, spiky hair (with all four appearing this way during the pre-and-post-game screens). The character will definitely grow on you as his different animations and facial expressions play out with each roll; SNK packed tons of different scenes and jokes into the game, and it’s not guaranteed that all of them can be seen in a single playthrough.

Alongside Pete are Mr. Bow and the Pin Brothers, the bowling ball and bowling pin characters featured extensively throughout the game. They have their own set of antics that play depending on the player’s performance, much like a real bowling alley, and they’re much more colourful than what’s seen in Capcom Bowling. The different animations range from simple things such as Mr. Bow knocking pins out of the way with a quick “Hi!” or opening his top to reveal three turkeys upon rolling three strikes in a row, to craziness like Pete attacking a pin with a flamethrower (!) or falling into a city a la Geese Howard for rolling a gutterball! It’s actually rather unfortunate that these animations usually only happen when the player is not performing well, as anything past four strikes simply earns you a quick thumbs up or a smile. 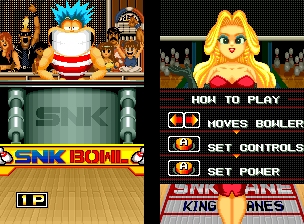 Aside from all the action up front, the game actually features very gorgeous backgrounds as well, with plenty of neon signs, nearly every plank of wood visible, and all the appropriate markings on the lanes including a neat ‘SNK Lanes’ decal. Even the reflections from pins in adjacent lanes can be seen, and detailed crowd members (including Nadia from Nadia – The Secret of Blue Water) are featured in the distance when viewing Pete’s reactions. During single-player, a buxom blonde in a cocktail dress, named Jessica, provides the controls on the opposite side of the screen in case you forget them.

While it doesn’t quite match the polish of the visuals, the audio is definitely acceptable, with plenty of upbeat music and punchy sound effects that complement the action. None of the music is too memorable, relying heavily on FM channels rather than samples, causing most of it to sound more akin to a Genesis / Mega Drive title rather than the sample-heavy music of later Neo Geo releases such as the King of Fighters series. The sound effects, on the other hand, are very accurate, with everything from the rolling ball to the crash of the pins being stricken sounding clean and realistic. There’s even a good deal of voice clips with Pete, Jessica, Mr. Bow, and the Pin Brothers all having distinct voices! Players may even recognize the announcer from Fatal Fury and Art of Fighting, with several clips of his own to announce strikes and other events.

While League definitely delivers in quick bursts of fun, the game lacks customization and players can quickly exhaust the three modes in just a couple of minutes, especially if playing alone. A “Beer Frame” can be activated within the dip switch settings, which makes the fifth frame of multiplayer Regulation mode display Mr. Bow and the Pin Brothers holding some beer, but otherwise has no bearing on gameplay. This lack of options extends to the home ports as well, with League Bowling originally appearing on the Neo Geo AES and Neo Geo CD; both ports are identical to the arcade (albeit lacking the Beer Frame option), with the CD port loading before the title screen. These ports also allow for high score saving with a memory card. 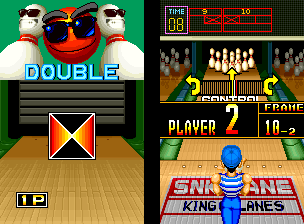 League Bowling was later released on the PlayStation 3 and PlayStation Portable with online play in 2010 thanks to M2, then to the Wii Virtual Console in Japan by D4 Enterprise in 2011. The Xbox One, PlayStation 4, and Switch received ports in 2018 by way of HAMSTER Corporation’s ACA NEOGEO line. All of these ports are emulations of the original with the Beer Frame intact, as well as different graphical options that include playing the game within a border, although the title screen was changed to avoid triggering epilepsy. The ACA versions each cost $7.99 and include cloud saves, multiple languages, “Caravan Mode” (challenging players to earn high scores over a five-minute period), and achievement/trophy support (on Xbox One and PS4), but none of the modern ports support the four-player simultaneous feature. For those that want to experience League on current platforms or on-the-go, it’s easily accessible, although it may not seem worth the money due to its brevity; while it was well-received back in 1990, nowadays, it seemingly failed to garner any attention, as reviews for modern ports are few and far between.

As far as arcade bowling games go, League Bowling is arguably the peak of the genre; with its bright and appealing visuals, solid sound design, and easy pick-up-and-play controls, it serves as a solid entry into the early Neo Geo library as well as a solid entry into bowling games as a whole. Despite that, the game doesn’t have enough to offer in this day and age when one can simply go to the bowling alley and play a few frames with their friends, or play Wii Sports‘ bowling. With more control over the ball, more game modes, and slightly tweaked collision detection, League could certainly hold one’s attention longer, but sadly, SNK never bothered to make any more bowling games. In fact, they didn’t even bother to include it on the Neo Geo mini, showing that what was once a strike became nothing more than a spare.